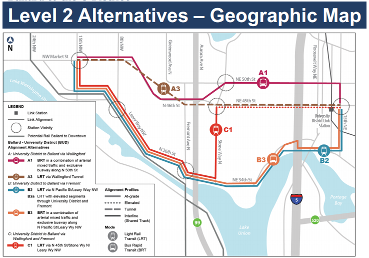 On June 5, Sound Transit released a preliminary report on the Central and East HCT (High Capacity Transit) Corridor Study. The report studies three new HCT corridors: University District-Kirkland-Redmond, Ballard-University District, and Kirkland-Bellevue-Issaquah. The overall thrust of the document is to connect Ballard to the U-District and to use 520 to connect to one of many different locations on the Eastside. The corridor study also includes a few options for reaching Issaquah and the Issaquah Highlands.

For the Ballard to U-District corridor (starting from page 10), three different alignments and a mix of modes are considered, including rapid transit (BRT), at-grade streetcar, full light rail subway, and a combination of streetcar and elevated. (The rail options are collectively called light rail transit, or LRT.) A few key points that stand out here are:

Though some of these routes skip Fremont, it’s worth noting that the most popular alignment for the Ballard to Downtown corridor would give Fremont a prominent stop.

The A3 subway route stands out as the top contender for solving North Seattle’s east-west transit problem. It’s not much more expensive than the other rail options, and it could give a stellar 6-minute commute time from Ballard to the U-District, which is generally not possible with any mode (transit, bicycle or car) today.

On page 4, the study looks at the options for serving UW Station and the U-District (page 4). This part is a little confusing, because it appears that Sound Transit is suggesting that the UW and U-District need more high capacity transit than they’re already getting with U-Link and North Link. In fact, the goal here is to connect the Ballard to U-District line with the route crossing the 520 bridge.

The next few pages (5 and 6) illustrate ways in which the line might connect to the 520 bridge, and where to connect on the other side. The options include running along the Montlake Bridge to 520 and running in mixed traffic as Bus Rapid Transit (BRT), or running light rail along its own bridge or guideway across the bay and across Lake Washington along an expanded bridge deck. On the other side of Lake Washington, page 6 explores possible end points for the transit line, including Totem Lake, Downtown Redmond, and Hospital Station.

None of these routes consider an alternate lake crossing. All of them use 520.

The final corridor reviewed is Kirkland to Issaquah. Three BRT and two light rail options are considered here, and an additional BRT and LRT alignment is considered for continuing up from Issaquah to the Issaquah Highlands. All of the BRT options to Issaquah utilize freeway managed lanes for all or part of their route, and rely on WSDOT’s ability to keep the lanes moving at a minimum of 45 mph. All of the light rail routes utilize the Eastside Rail Corridor for at least part of their route. The ridership numbers for both BRT and light rail are quite low, with a few of the BRT routes having potentially better ridership than the light rail routes. When the Issaquah Highlands extension is included, both BRT and light rail come out at roughly similar numbers, with light rail costing 2-3x the price of BRT. The light rail does manage to shave about 7-9 minutes off of travel times.

Of the corridors presented in this study, Ballard to U-District seems the most promising, with the most ridership potential and the greatest improvement to travel time. The low ridership numbers for the Eastside study do leave the impression that it will be difficult to find a cost-effective Eastside light rail project besides East Link (the route that will connect Seattle to Bellevue via I-90). It may be worth Sound Transit’s time to put all of the Eastside’s plans side by side to find the most cost-effective rail investments, and perhaps to consider investing in all of the BRT options rather than just a few of them. More density and growth in the Eastside’s city centers may be needed before a second light rail corridor makes a lot of economic sense.

Thanks to Seattle Subway for posting the study document to Twitter.