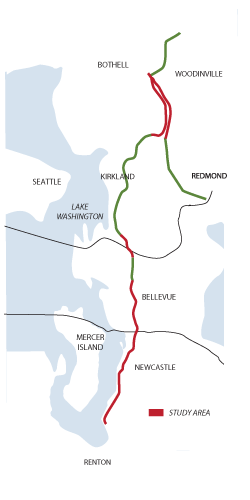 The Eastside Rail Corridor is an abandoned railway formerly owned by Burlington Northern Santa Fe (BNSF). The railway corridor stretches from Renton to the King County/Snohomish County border with a spur off of the mainline into Redmond. When BNSF abandoned the line in 2007, the right-of-way was sold to the Port of Seattle. King County made a subsequent deal with the Port of Seattle to swap Boeing Field for the railway corridor and then began to handover portions of the corridor to other jurisdictions and agencies like Kirkland, Redmond, and Sound Transit.

With freight service permanently suspended throughout most of the line, cities and agencies began to plan for alternative uses of the right-of-way. The two natural uses that standout for the right-of-way are transit or a regional trail. The City of Kirkland has already chosen to construct a trail using a segment within their jurisdiction. Trackage in Kirkland has already been removed in some places, but removal was delayed for a time due to a lawsuit by a freight company. Meanwhile, Sound Transit has already acquired a section stretching from NE 8th St to NE 16th St in Bellevue for the future East Link light rail line. Redmond also is working hard to construct their Central Connector.

The transit potential for the line is generally poor. The ERC unfortunately largely bypasses key activity centers like downtown Bellevue, central Kirkland, and Factoria. By extension, this also means that density and development potential resulting from transit along the corridor is relatively low, short of significant land use changes. For instance, Sound Transit recently completed a corridor study that indicated that bus rapid transit on I-405 would be a much better investment for the corridor in the short-to-mid-term.

However, some parts of the ERC provide excellent connections between cities. In the segment from Renton to Bellevue, I-405 and the ERC basically follow the same linear path and never being at distance of more than 2,000 feet apart. Few density pockets exist along this segment of the ERC, except for Factoria–which neither the ERC or I-405 serve well. Should high-capacity transit be constructed between the two cities, it should deviate from the corridor of I-405/ERC to better serve the Renton Highlands, Newcastle, and Factoria.

A particular challenge for any reuse of the ERC is the Wilburton Trestle located in a segment between Factoria and the future Hospital Station for Link Light Rail (located at NE 8th St. in Bellevue). The trestle, as currently constructed, is not suitable for transit use because of the narrow width of the trestle. This alignment also suffers from its lack of direct access to downtown Bellevue–short of double-backing from Hospital Station, an option which is not particularly optimal for a light rail system.

The best path between Bellevue and Kirkland would be a split for East Link. This junction could conceivably be located at Hospital Station. Trains could continue along the ERC to 7th Ave S (where Google’s Kirkland Campus stands) to reach downtown Kirkland. The benefit of this alignment is more than just downtown Kirkland. In this segment, the ERC jogs northwest toward downtown Kirkland meaning that it has the opportunity to directly serve both South Kirkland Park and Ride and the Houghton commercial district. These two activity centers have considerably more development potential than the entire I-405-running alingment. Meanwhile, it’s also conceivable that the ERC could be use for rapid transit from downtown Kirkland to Totem Lake, at which point the railway alignment could re-emerge to I-405. Trains could easily go express on I-405 in order to reach Bothell and Lynnwood.

In sum, the ERC’s best potential for high-capacity transit lies in Kirkland and portions of Bellevue while the remainder of the corridor simply is incapable of generating enough ridership to justify a heavy investment in HCT.

Ever since there was talk of BNSF abandoning the ERC, there was talk of having it converted to a rail-trail. And while that vision has yet to be fully realize, the ERC actually is already open to the public! As noted earlier, cities like Kirkland and Redmond are removing rails and creating formal trails. The ERC presents a unique, region-wide asset as a true commuter and play corridor. This is especially important to Eastside residents because despite excellent east-west trails like I-90 and Sammamish River Trail, there are no good north-south trails in the heart of Eastside. If the full length of the ERC provided paved trail access, the ERC would fill in a major gap of regional trail network.

The Seattle area already has a multitude of rail-trails which have been successful, such as the Interurban, Sammamish River, and Snoqualmie Valley Trails. The most successful of all is probably the Burke-Gilman Trail, which in peak-hour carries as many people as a freeway lane without needing grade-separated crossings, ramps, or heavy maintenance.

The ERC could be a important regional trail, if built right. First, the entire corridor should be converted to a trail without any detours. That means all trestles should be rehabilitated (if needed) and opened to the public. At present, the corridor is riddled with many that are closed, presumably because they are unsafe. Instead, they should be inspected and retrofitted by improving their structural stability and installing safety features like barriers and fencing. A new pedestrian overpass would need to be built across I-405 near SE 8th St in Bellevue. The tunnel carrying the trains over the highway was removed in 2008 to allow for widening of I-405.

An ERC trail should absolutely include the Wilburton Trestle. Built in 1943, this trestle is almost 1,000 feet long and constructed entirely of wood. The trestle should be accessible to the public, and naturally this is a unique asset to the corridor–one worth cherishing and using. This is no small task, but it has been done with much larger trestles on other rail-trails.

For instance the Chatcolet Trestle, a 3,100 foot trestle that is part of the Trail of the Coeur D’Alenes (in Idaho) has been restored, raised over its original level, and opened to public use. This is a worthy case study to point to because the Chatcolet Trestle is situated over a lake. Thus the trestle requires much more maintenance to ensure its soundness that a trestle built on solid ground like the Wilburton Trestle.

One way in which the Burke-Gilman Trail is such a success lies in its proximity to many activity centers and places of interest. It has excellent access to places like Ballard, the Locks, Fremont, Wallingford, Gas Works Park, and most importantly the UW. It also acts as a crossroads for many other local bikeways. Apart from the Overlake/Hospital area in Bellevue and Houghton and Totem Lake in Kirkland, the ERC does not go through any urban centers. Connector trails then would need to be built in order to link the corridor to major urban centers, such as Factoria, downtown Bellevue, and downtown Kirkland–all of which are actually very easy to link. And good connectivity should be provided to other trails like the I-90, SR-520, and Sammamish River Trails.

The Eastside Rail Corridor can become a great regional transportation corridor, not only for transit but also as a trail for pedestrians and cyclists alike. While the corridor is far from perfect, it fills in an important hole of the Eastside’s north-south transportation system and allows for good connectivity at a very reasonable price–if we do it right. Now, let’s built it!