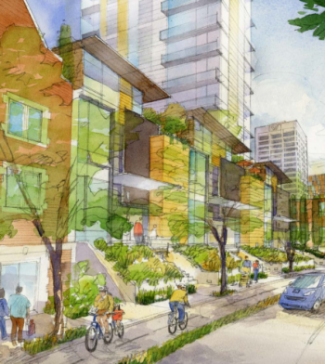 Editor’s Note: For a more in-depth primer on the University District Urban Design Framework, see our background article on the project. Between the two growth-friendly alternatives, Alternative 2 is the clear winner. High-rise development will make excellent use of the new light rail station, and new towers will not be out of place in the Seattle neighborhood with the two tallest buildings outside of downtown. Alternative 1 would lead to unnecessarily small buildings in the center of the neighborhood, which we would be stuck with for a very long time. Alternative 2 will likely preclude any mid-rise redevelopment of many properties on the neighborhood’s fringes, but a later rezone could fix that problem.

Having said that, we believe that the best approach would be a combination of these two alternatives. The combination, which we’ll call Alternative 4, would pair Alternative 1’s neighborhood-wide rezoning with Alternative 2’s high-density core. Alternative 4 would be able to accommodate additional towers and mid-rise development toward the center of the University District, while encouraging more modest redevelopment of underutilized and blighted low-rise properties along the fringes of the neighborhood. The neighborhood core could become a strong anchor for research and development organizations, local services, offices that serve the University of Washington, and any private businesses that want space outside of downtown Seattle. The University District’s convenient location and light rail access will make it a highly desirable place to live (even more than today); the more housing (and variety of housing types) that the neighborhood can accommodate, the better.

Whichever alternative(s) you support, please make sure to send your feedback to DPD. You can submit comments to the project planner, Dave LaClergue, through June 23, 2014.

UPDATE: For a high resolution version of Alternative 4, please download the PDF (courtesy of Oran Viriyincy).