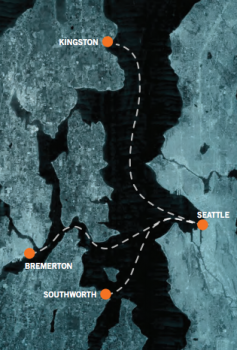 Kitsap Transit is seeking public comment on its long awaited restoration of cross-Sound passenger only fast ferry service to Downtown Seattle. Among the three routes under consideration, the most obvious candidate for foot ferry service is Bremerton. The current service between the two cities has the largest proportion of walk-on passengers of any route in the Washington State Ferries network.

Travel time on the Bremerton-Seattle ferry route is about an hour, a commute that is only negligibly shorter than the 65 mile trip over the Tacoma Narrows Bridge. A fast (about 35 minutes), convenient ferry ride from downtown Bremerton to Downtown Seattle could serve the dual purposes of revitalizing an urban center in sprawl-plagued Kitsap County while providing relief for the malcontents of skyrocketing Seattle housing prices.

The story of how Bremerton lost its fast ferry service is long and sordid. Land owners with property along Rich Passage, the narrow stretch of water that the ferries must pass through on their journey, have been suing ferry operators over alleged shoreline erosion since the early 20th century. After years of research, development, and environmental studies, Kitsap Transit is set to finally bring back convenient cross-Sound foot ferry service to Downtown Seattle using a low wake vessel purchased several years ago with Federal grant money.

There is, of course, already ferry service available for foot passengers to Bremerton aboard the Washington State Ferries route. In its current form, the trip is about an hour long in each direction. The difference between 35 minutes and an hour for each direction of a commute to work is significant. 35 minutes is about as long as a weekday morning bus ride to Downtown Seattle from Ballard. Reducing the commuting time between Seattle and downtown Bremerton could have transformative effects on the city, a once thriving industrial and urban center that has been hollowed-out by sprawling development in Silverdale to the north.

The data and opportunity at hand

In a recent study, MIT researchers demonstrated that the distribution of commute times for a given metropolitan area is fairly constant across modes of travel, and is largely unaffected by changes in commute distance or in population growth. The study provides more evidence supporting the fact that people change their habits as transportation modes are expanded. It also suggests that the existence of something like a localized form of Marchetti’s constant, a theoretical limit on daily travel time that remains relatively constant at around one-hour for all societies. The mean commuting time for Seattle is around 25 to 30 minutes each direction, and varies between 20 and 20 minutes across most metropolitan areas in the United States.

When a city adds transit capacity that reduces the commute time for a neighborhood below the threshold time people are willing to spend traveling each day, it has essentially expanded the boundaries of its housing stock for a large number of residents. In the case of a Bremerton foot ferry, this would result in the addition of a significant amount of affordable housing. Zillow lists the median home value for Bremerton as $190,900. A quick search reveals that there are over 200 homes currently for sale for less than $350,000 within about a 10-minute bike ride of the Bremerton ferry terminal.

While the problem of affordable housing in Seattle won’t be solved with a passenger ferry, residents on both sides of the Puget Sound should see the restoration of convenient ferry service as a hugely positive development. A passenger ferry has the added benefit of spurring pedestrian activity around the terminal. And, Bremerton is a city desperately in need of pedestrian activity. If public officials provide reliable ferry service and allow smart development to occur in the city’s downtown core, there is a potential for the kind of walkable, transit-oriented development that has been missing from the west side of the Puget Sound for decades, since the days of the Mosquito Fleet.

There are two other possible routes under consideration, from Kingston and from Southworth. Neither of these routes has anywhere near the potential ridership of a Bremerton route, which would provide service to the Puget Sound Naval Shipyard, the largest employer in Kitsap County. And, neither Southworth nor Kingston has the same potential as Bremerton for creating a walkable urban center.

If you are a cross-Sound commuter, or if you care about expanding options for transit and affordable housing in the region, send an email to pofinfo@kitsaptransit.com and tell them. In your email, make it clear that the Bremerton route is clearly the best choice for what will hopefully just be the first of more passenger-only ferries returning to the Puget Sound. 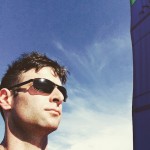