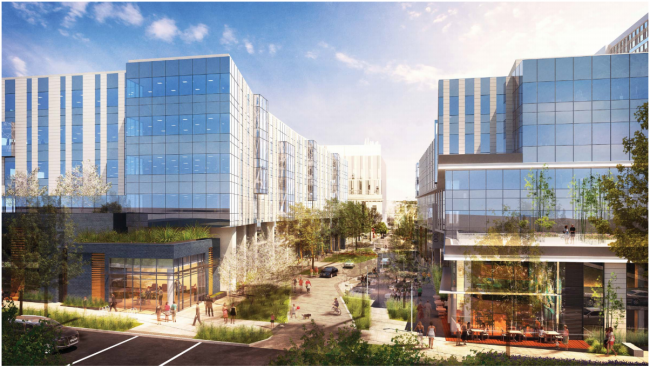 If all goes to plan, Seattle will soon have another woonerf making its way to a street near you. Vulcan lodged two related project proposals in South Lake Union along 8th Avenue N back in October 2013. The project went through a series of design reviews which analyzed alternatives for a Green Street or woonerf. But 8th Avenue already has plenty of other projects that have been developed to the Green Street standard, too.

The length of 8th Avenue N between John Street and Mercer Street was previously identified as a Green Street. More recent plans by SDOT/DPD have instead redesignated the street as a woonerf. Green Streets provide enhanced pedestrian environments, which can include streetscape features like wider sidewalks, street trees, landscaping, and appropriate furniture emphasizing pedestrian movements. These streets tend to be very boulevardesque with areas for seating, attractive landscaping, and thinner lanes to slow through traffic.

Woonerfs take this concept a step furtherer by strictly emphasizing non-motorized traffic movements. They are created through shared spaces that give visual cues and implement physical elements to encourage automobiles to yield and slow to other users. Woonerfs employ many of the same elements prescribed by Green Streets, but are more than just pleasant, wide green streets. An example in Seattle is the Bell Street Park, which presently runs for four blocks between First Avenue and Fifth Avenue on Bell Street.

SDOT and DPD have gone through an evolutionary shift of how 8th Avenue N should function as a local transportation path. First designated as a Green Street and now as a woonerf, the street can provide additional safety for pedestrians and cyclists, new active and passive open space, and implementation of important environmental goals like onsite water quality enhancement, tree canopy cover, and more porous permeability. All of this can be achieved while maintaining an access for through traffic in cars and providing space for parking. Vulcan was the first property development company to actually propose a woonerf along 8th Avenue N. Past projects chose to pursue Green Street elements instead–for a combination of reasons like former Green Street policy, developer choice, and responsibility for only half of the right-of-way width. Vulcan’s 300 & 333 8th Ave N (project permits 3014981 and 3014982) project straddles both sides of 8th Avenue N and is proposed to construct two new 6-story linear office buildings (as seen in the first image) for Amazon. This project offers a unique opportunity to do work on for the whole right-of-way width of 8th Avenue N between Harrison Street and Thomas Street.

Vulcan’s Green Street and woonerf street design alternatives were equally supported by the West Design Review Board. The Vulcan architecture team thoroughly explored the woonerf option as the preferred design option throughout the design review process. Between what the Vulcan team has indicated publicly and the investment in designing the woonerf space, it seems incredibly likely that it will be the chosen alternative unless SDOT rejects the right-of-way plans.

As you can see above, the street is angled along the length to give it visual termination points leading into the buildings. This meandering street pattern in itself is a way to reduce traffic speeds. But if that weren’t enough, Vulcan has included pockets for street parking (perhaps ideal spots for future food trucks?), physical barriers like outdoor seating and low blocks/walls, street trees, and expansive green areas. The street is also elevated from the intersections north and south meaning that drivers have to drive up gradual ramps, another cue to keep it slow. Materials for the street are intentionally chosen to indicate how the spaces are subtly divided up. Ultimately, the pedestrian and cyclist experience should be vastly improved with a new park-like space.

A project dubbed 8th + Republican (home to Glazer’s Supplies) completed Design Review in December 2013. A the Recommendation stage, the project proponent was supportive of a Green Street concept for their half of 8th Avenue N. The project proponent focused on three primary ways to address the street: a wide sidewalk, two large bulbs projecting from the sidewalk with on-street parking situated between them, and an expansive, but well designed public plaza with low lying vegetated landscaping and outdoor seating.

777 Thomas St is a project located just south of the Vulcan site and completed Design Review in July. At the Recommendation stage, the project proponent had only tacitly attempted to address the Green Street requirements for 8th Avenue N. A small bulb is proposed for the northwest corner and a set of planter strips at the edge of the sidewalk. Despite this, the Design Review had been very receptive of the plan and only requested that the project proponent extend the bulb further into the street.

The University of Washington Medicine Lake Union campus comprises a multiplicity of builds and two block on 8th Avenue N. The project was planned in phases and proposed simple Green Street elements to calm traffic: end-of-block bulbs from the sidewalks, wide sidewalks, a mid-block crosswalk with treated pavement and bulbs to reduce the walking length, and dynamic planter strips. So far most of the elements have been implemented, particularly on the east side of 8th Avenue N while they have been partially implemented on the west. Completion of the planned street improvements are pending construction of the other project phases.

Where we go from here

Despite the fact that more than half of 8th Avenue N has been redeveloped (or proposed to be) in recent years, it still has ample properties ripe for redevelopment. This means that there are future opportunities to use the Vulcan project as a standard for how to design the remainder of the street.

Future project proponents along 8th Avenue N will have the opportunity to choose what street typology they prefer–Green Street or woonerf. Hopefully project proponents will be naturally inclined toward providing a woonerf as part of their frontage improvements. But it’s not all on the project proponents. The public, development review staff, and West Design Review Board all have a part to play in ensuring that the vision for a 8th Avenue N woonerf street becomes a reality. At the project level, supporting alternatives that include a woonerf during design review is one way to do this. Another is to directly contact DPD, SDOT, and the City Council to support the expansion of a woonerf along this street (and other streets for that matter).

An upcoming project to watch (and comment on) is 401 8th Ave N (design review document), which is scheduled for its first Early Design Guidance on October 1. To follow all projects that are proposed, under review, under construction, or completed in Seattle, see my Development in Seattle map.