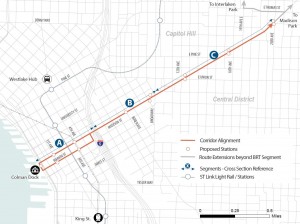 The Madison Street Corridor had previously been identified in the Seattle Transit Master Plan as one of the main transit corridors in the city that should be upgraded to High Capacity Transit service. Due to the topography of the route, normal adhesion rail based-options were ruled out and Electric Trolley Bus-based BRT was chosen as the preferred transit mode for this study.

After a brief transit-affirming speech by City Councilman Tom Rasmussen who stated his full support for the construction of a “true BRT line” for the city, the lead for this project, Maria Koengeter, introduced the study.

The open house is the beginning of a yearlong study of the corridor and the overall purpose of the meeting was to engage the community to introduce the project as well as to begin the discussion of what the overall needs and goals of the project are.

The estimated capital cost for this BRT line is approximately $87 million, and the City of Seattle has allocated $1 million for this study.

Ms. Koengeter outlined SDOT’s goals for the study as:

The timeline for the study has been set as follows:

Further public outreach sessions have been tentatively scheduled for November and December this year, and in February and June of 2015.

SDOT and the City are also making sure that this project follows NACTO’s complete streets guidelines that require support for all users, including pedestrians, cyclists, and transit–not just automobiles. Due to the narrow width of Madison Street, the bicycle component of the project will be off-loaded to an adjacent street, which will be determined at a later date.

In addition to the transit and right-of-way changes, the City is also interested in improving the general streetscape of the corridor. This includes improvements to sidewalks, landscaping, and public safety as well as connections to Madison from neighboring streets. SDOT indicated that many improvements to the corridor that can be phased in over the duration of the study. This may include the removal of on-street parking to the addition of lighting and trashcans at existing bus stops.

Through discussion with many of the representatives from SDOT and their consultants at the meeting, it was clear that SDOT and the City of Seattle are eager to design and construct this project correctly. There is a strong desire to make this line function as a true BRT line (with all expected amenities such a line provides) and not as an “Enhanced Bus Service” line such as the existing RapidRide lines. The representatives from SDOT are factoring in the topography of the route in their study. The route will have closer-than-normal stops (for BRT) and will most likely utilize 40’-45’ Trolley Buses due to clearance issues at the interface between the flat avenue crossings and the hill. The western terminus of the line will be selected as part of the seawall and waterfront redevelopment project. The intention is to have a direct connection to the ferry dock. The eastern terminus of the line is yet to be determined. Currently, the route is being studied from Coleman Dock at the waterfront to at least 23rd Avenue, however, there was a lot of interest in having SDOT look at extending the line all the way to MLK & the Madison Valley Business District.

Finally, the representatives from SDOT seemed to be surprised at the general amount of opposition expressed towards on-street parking on Madison Street, and most seemed to agree that the removal of the parking could be an easy fix to improve service immediately.

The open house had a decent turnout from the public, especially the First Hill Residential and Business communities and the local Hospitals. SDOT’s representatives were knowledgeable about the area and seemed genuinely interested in the possibilities going forward. Many details such as dedicated bus lanes (curb or center lane), traffic signal priority, what happens to the Metro Route 12, etc. have yet to be discussed. However, SDOT is planning at least four more public outreach sessions over the course of the study and their ongoing analysis of the corridor will inform the options they will present to the public.

Whether in the end a true BRT line is built, or simply existing service is enhanced, the attention being finally given to this highly-strained transit corridor is welcome.