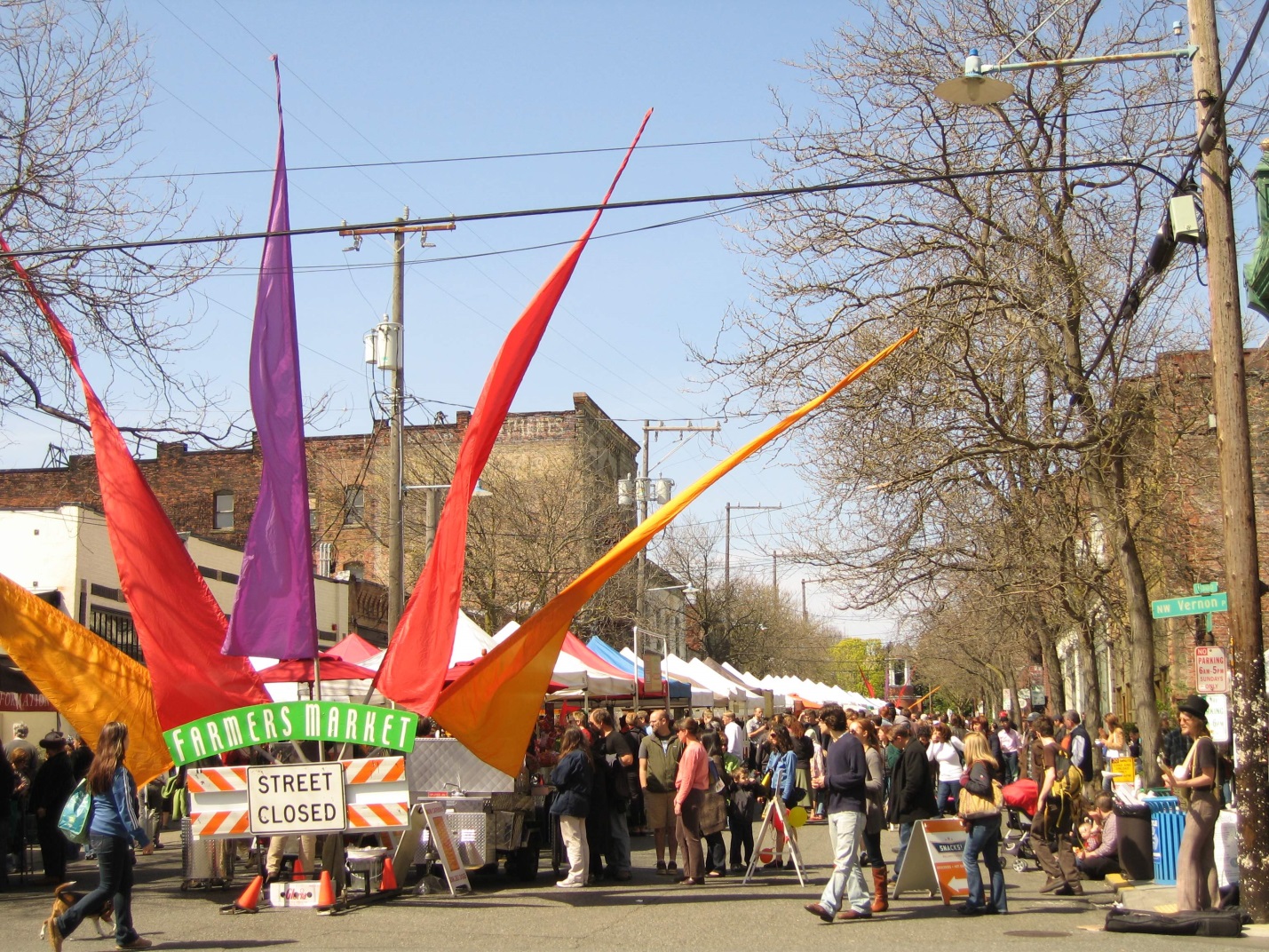 The mini-neighborhoods that make up Greater Ballard (Central, Adams, Sunset Hill, Loyal Heights, Whittier Heights, and West Woodland) together form an incredible place. Ballard is a neighborhood with beautiful people, parks, markets, restaurants, night life, and supreme views of the Puget Sound and Olympic Mountains. So it’s no surprise that Ballard is fast becoming a destination for Seattleites and visitors alike.

But despite being an up-and-coming neighborhood, it is has some serious physical and political constraints that are holding it back from reaching a greater potential. Let’s explore some of Ballard’s not-too-distant past and its (hopeful) potential future.

When I was in grade school, my parents told me that one day, I would be able to ride the monorail from our neighborhood to Mom’s work Downtown. At that time, I had no idea that I would grow professionally to have a passion for mass transit. But even then, I knew that the promise of monorail was cool and good for Seattle. We all know how that ended. The Green Line was halved, Ballard being the first portion to be nixed. That was a huge second slight to Ballard. The first slight came from the 1980s when the neighborhood was recognized for having high ridership demand, and just waiting for that high capacity transit line to serve it (see image below). Just think, this might have been our mass transit system–nearly 30 years ago!

Despite this setback, some serious good came out of it. Sound Transit built up great experience in managing and constructing transit. And now we have the opportunity to build a system of better, regional lines.

The Present and Future Remedy

Sound Transit and Seattle Department of Transportation began a high capacity transit study between Ballard and Downtown back in January 2013. The public feedback results aren’t surprising and you can read some of my past analysis on the topic, in addition to others like Ben Schiendleman and Seattle Subway. ST and SDOT did a great job by spearheading this study before any potential ST3 vote, which is a huge boon for the effort!

In the heyday of the “Grunge Movement” (mid-1990s) Ballard went through a rezone, the effects of which we see today. Many NIMBYs cursed repetitive “bread loaf” buildings that eventually went up. Buildings that are developed and designed more by the floor area ratio and seismic wood height limitations than for aesthetics and neighborhood appeal.

Let me be very clear in that I begrudge no developer or architect for building to the zoning code as it was written and approved years and years ago. All I can say is that there is always an opportunity to revise and rewrite the code so that all parties can make better buildings and neighborhood places (a very worthy video). I may be an optimist, but I truly think that NIMBY resistance isn’t due to the prospect of more neighbors, it’s due to uninspiring, clunky buildings.

Ballard’s Urban Design Framework (UDF) can bring land use policy recommendations to the Seattle City Council. Ideally, those recommendations would be future-oriented and forward-thinking. We know DPD is very capable of making such recommendations (and has!), but we also know that a few vocal outcries could derail the resolve for good, equitable, sustainable, and future civic planning. Below is the case for one recommendation that can benefit Central Ballard as a neighborhood, and by extension the city and region as a whole.

DPD should pursue a slight rezone on the block with the current highest and underutilized zoning capacity in order to save it from becoming an uninspired block in a few years. Central Ballard can simultaneously demonstrate to Sound Transit that it can be the anchor station for a Ballard to Downtown line (presumably funded in a 2016 ST3 ballot measure). Let’s help give Sound Transit more of a reason to deliver us a line that would further activate Downtown Ballard.

In the image below, you’ll see a purple block roughly bounded between 20th Ave NW, NW Market St, 17th Ave NW, and NW 56th St. That block should be the nexus of a Ballard to Downtown light rail station.

Below I have highlighted a block that I believe is a prime candidate for such a slight upzone. It’s also the same block identified in the Ballard UDF as having the greatest development capacity in terms of redevelopment of parcels and zoning. The block already has NC3-85, the highest zoning type for the neighborhood!

Only 2% of Ballard’s zoning is NC3-85. And, about half of that has already been developed. A slight rezone with building “massing” setbacks from the streets and only a 16% floor area ratio increase from 6 to 7 could really capitalize on its already excellent location!

Here is an explanation of the above image: The orange overlay shows where all of Ballard’s strictly NC3-85 current zoning capacity lies. The purple and blue indicates where recent or “built out” construction has occurred (i.e. non developable property for at least a few decades). If you look at the UDF Development Capacity map (the first image in this section) and my highlighted existing zoning map together, you’ll find that the two maps correlate for the greatest potential to activate new, exciting space in Central Ballard.

Putting It All Together

Ballard (and North Seattle) residents have a right to be skeptical about changes in transportation planning and neighborhood zoning. But that doesn’t mean that those goals and pursuits should be watered down and scaled back for fear of enraging a vocal minority. That’s what happened to the Green Line and largely the 1990s zoning in Central Ballard. And nobody is happy about either of those almost 20 years down the line. Let’s not repeat the past.

Hopefully, Ballard will take the same cues from the University District and its UDF. Create a few dense businesses and residences to act as anchors to a regional mass transit line. If Ballard doesn’t, I’m afraid it will build out under its current zoning capacity within the next 5-10 years. If and when it does that, the life cycles for those buildings will be approximately 50 years leading to a very stagnant Ballard. That unfortunate future would lack iconic buildings and have a populace potentially stranded without grade-separated mass transit.

Be bold Ballard. It’s what makes you, you.