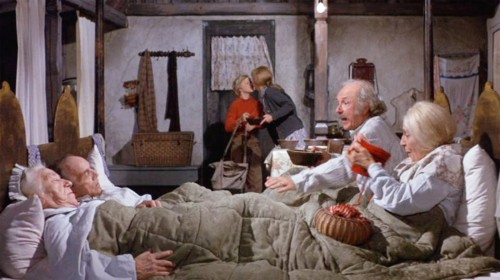 Multi-generational housing has seen steadily increasing demand throughout Northern Europe, and stateside as well. The concept even hit the NYT late in 2012.  While I don’t have a Grandpa Joe or live with my in-laws in a one room apartment (thankfully), the topic has come up more than a few times, and there’s a good possibility if we stay in the US, one set of our parents could move in with us. Multi-generational housing presents a unique typology that isn’t commonplace, but offers a lot of potential. It’s a typology that the City of Seattle should encourage–nay, must encourage. Unfortunately, the City recently blocked an intriguing proposal by a colleague of mine, causing the client to move to another jurisdiction.

There are a few different models of multi-generational housing, and size/form can vary from detached housing with additional living space to large complexes. They can be a means of pooling a family’s assets and building a better home where everyone is close together. Co-housing definitely comes with its own interesting set of demands and requirements, but there are also great opportunities in them. A family with children, a single parent household, or seniors would all be suitable for a multi-generational house. So, here’s a brief survey of a few innovative projects regarding those typologies.

At its most basic level, a multigenerational house could just be a (detached, row) house with mother-in-law apartment. If detached, they’re going to be the hardest to meet Passivhaus, slightly easier with the rowhouse. The incorporation of an ADU makes a lot of sense for Seattle’s SF zones (though it is highly unfortunate it’s limited to just one per lot). Unfortunately, even though ADUs are great for reducing insurance, mortgage and tax burdens–something like 1,400 (legal) ADUs have been permitted on Seattle’s ~124,000 single family lots since the ADU ordinance was passed in 1994. Obviously, a ton of potential to add density here. At a minimum, it would probably be responsible to design new housing to incorporate an ADU for future flexibility.

The incorporation of a DADU or backyard cottage could be another way to set up housing for the elderly. While the typology is intriguing–financing can be relatively difficult to pencil out and the DADU ordinance has some ridiculously onerous requirements. DADUs are often touted as a means of increasing density–though few have been built in Seattle. Sightline Institute had a great series of posts on ADUs/DADUs that revealed how the City could encourage more of this form of housing.

A step up from the ADU/DADU is the incorporation of multiple living suites combined in one building, with a central living space(s). This, to me, is a really great approach, and there have been several successful projects–some even Passivhaus or near-PH. I guess one way to think of this could be micro co-housing. Each family has their own space–with shared common areas. If kept relatively compact, it could be much easier to achieve Passivhaus than detached housing. I also like the idea of reducing the number of kitchens–helps keep costs lower.

One I’m very fond of is a concrete project in Loerrach, Germany by Gunter Pfeifer. The project consists of a space for the grandparents on the ground floor, children’s bedrooms in one concrete ‘wing’ and the parent’s bedroom in the other. The central common area brings natural light deep into the house and utilizes several aspects of Pfeifer’s ‘kybernetische prinzip’ for a lower energy residence. This central space that plays a key role in the thermal dynamics of the building is a common thread in Pfeifer’s work (Learn more and see additional photos).

Miyahara Architect Office’s TTN House is another interesting example. A 3-unit multi-generational house for an elderly couple and their two daughters. The project was designed for future flexibility, so each unit has self contained bathroom and kitchen. The structural images on this one are really interesting (Learn more from archdaily). 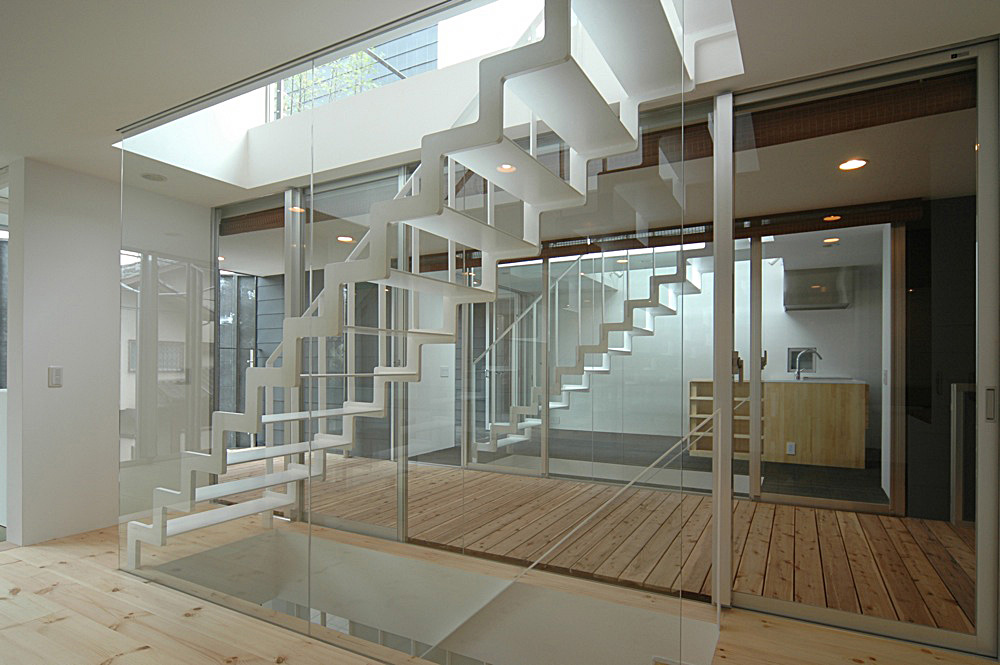 A relatively well-known and stunning example is Kraenzle + Fischer-Wasels’ mehrgenerationenhaus in Darmstadt. The project was built by an elderly couple, with the intention of their daughters’ families eventually moving in. The project is three  separate two-story units under one roof. Comingled between the units are some incredible common spaces and buffers (patios, gardens, entry). The project was planned to easily adapt to change (incorporation of an elevator or stairlift). Conceivably, it could even become a 6-unit apartment if the need arose. Not surprisingly, this won a number of awards.

Another variant, which may be more palatable from a long-term ownership perspective is a form of addition, apartments or row-houses that allow multiple generations to reside adjacent to each other. Grandma may not want to eat lunch with the rugrat on a daily basis–and so this provides a little more solitude in the present. And if the need arises to rent out the adjacent unit, there are fewer hurdles. The units can also be huddled together to make Passivhaus much easier to achieve. Better yet, a whole series of them to form a larger community, intertwined like some Corbusian wine rack. This phenomenal, modern, low-energy addition by Anja Thede to a 1920s house outside of Darmstadt plays up the assets of the site really well. The incorporation of an addition allows for future flexibility–the elderly to live in one house while the younger family in the adjacent, the ability for one unit to become a separate rental, or even an office. With a total floor area of 3,060 square feet, this type of project would easily fit on a typical SF5000 lot here in Seattle. And I just find it to be rather stunning (Read and see more photos, pdf in German).

In terms of large scale projects, there have been several completed buildings that combine housing for singles, families, and seniors. This is the version that I think is more common in the EU. Most Americans might say “well hey, isn’t this just typical apartments?” And at some level, it is–though these tend to be of two flavors. One, a mix of units including those incorporating ‘universal design’, as well as nursing facilities. Second, an elderly residence with community centers or pre-schools. In this sense, it’s more a community asset where multiple generations can interact on a daily basis. Of course, Passivhaus is overly applicable to a situation like this–the heating needs will be signifiacntly less while ventilation strategies may start to get fun. In many respects, the high level of comfort (No drafts! No cold surfaces!) of a Passivhaus, and excellent indoor air quality, pair phenomenally with the comfort requirements of elderly housing. I’ll actually go as far and say anyone building elderly housing at this point and not shooting for Passivhaus is going to lose a chunk of the market to the enterprising developer that takes that on.

One of the more interesting large-scale multi-generational projects is baumschlager + eberle’s Siedlung Ruggächern in the Affoltern district of Zuerich. A massive undertaking, 14 buildings of various height incorporating nearly 280 apartments for elderly, singles, and families. Pairing compact, well-designed density with great landscaping/public spaces, community spaces, and workshops? And then nearly hitting Passivhaus (20kWh/m2a)?!? Phenomenal development, the US could learn a lot from the work underway in and around Zuerich right now (More photos and information here (in German) and here (pdf in German)).

The Anna Haag-Mehrgenerationenhaus in Stuttgart by aldinger + aldinger is another example of larger scale complex. The project is a senior living facility incorporated with a kindergarten, cafe, teaching facilities, gardens, and courtyards.

And as for a multi-generational Passivhaus? Yup, that’s been done, too. This 27-unit complex in Herrenberg, Germany features accessible kitchen, workshop and meeting room on the ground floor. Passivhaus (tho uncert’d) was chosen for economic as well as environmental reasons. A stunning, unrealized project in Koenigsbrunn, Germany by cukrowicz + nachbaur/Walter Unterrainer would have met PH or been relatively close (More information and images by Europaconcorsi).

There is something very attractive about recombobulating the nuclear family. What could be better than increasing density, increasing human contact, decreasing transportation emissions, all whilst living in uber comfortable, hyperefficient housing? Perhaps forming a baugruppe to accomplish this deliciousness?