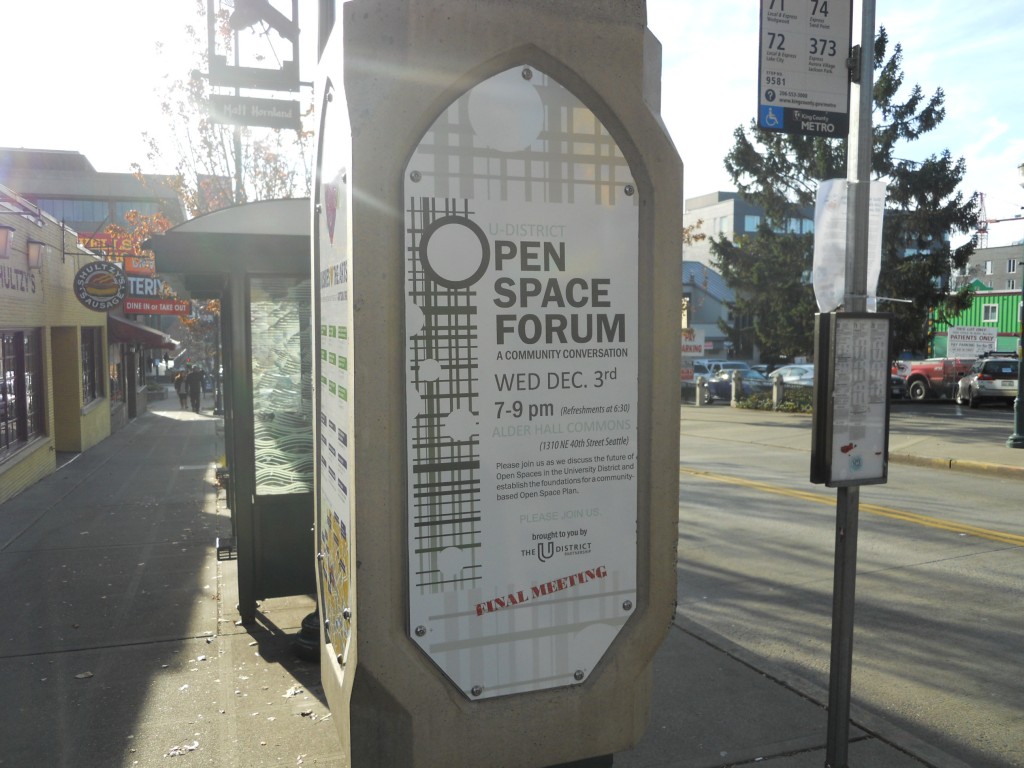 The third and final public meeting on an update to the U-District neighborhood’s park plan was held on Wednesday night. Like the first meeting (I missed the second), the event was well attended and organized. Here, city staff and their consultants presented a synthesis of ideas they heard during group discussions at the previous meeting. The direction that the plan will take is ambitious and will embody the core values of the community. The current plan, last updated in 2006, hasn’t been extensively acted upon, but the recent creation of the Seattle Parks District will help improve and add park spaces here and citywide. The catalyst for this public process is mostly the new light rail station that is due to open in 2021, seven years from now. The neighborhood currently has 14,000 residents, and by 2030 the station alone is expected to serve 12,000 daily commuters. The city is planning to increase height limits in anticipation of increased population and employment growth. However, the U-District also currently lacks an adequate amount of open space, with a three acre deficit by city standards. The University of Washington, the city’s largest employer and a magnet for youth and talent from around the world, is steadily growing. But its 600 acre main campus isn’t open to neighborhood residents for recreation and events.

A draft of recommendations to be listed in the parks includes six key elements. The first is to activate existing and planned parks. Most are along the neighborhood’s edge, including University Playground near I-5 and Cowen Park to the north. These spaces could be improved through better programming or simply letting residents know they exist, perhaps through flyers or a neighborhood wayfinding system. New park space is also opening within the next few years, including an expansion of Christie Park  and an addition to Sakuma Viewpoint on Portage Bay to the south.

The second idea is to establish a multitude of pocket parks so that most residents are within a five minute walk of open space. Pocket parks are small and intimate, provide relaxation space between larger parks, and oftentimes are on private property. While the city could acquire property for these types of parks, it may be more feasible to create incentives for future development to include pocket parks for public use. Such incentives usually include the exchange of open space for taller height limits. The third issue is the western edge of the University of Washington campus on 15th Avenue NE. It’s mostly a retaining wall facing a sidewalk for several blocks broken only by campus entrances. A representative from the university said there is an active interest in removing the wall, and projects like a possible Burke Museum expansion could facilitate it one piece at a time. I suggested that the university’s need for additional office space could be fulfilled along the edge with office buildings that contain street level retail. Locating future student housing along the edge would also give students easy access to shopping on University Way (The Ave, the district’s main commercial street) and transit connections. The fourth idea is east-west pedestrian connections, especially between the university campus and the upcoming light rail station. There is already movement in this arena; after 42nd Street, 43rd Street, and Brooklyn Avenue were identified for “green street” treatments in a 1998 neighborhood plan, the the city is finally finishing up designs for these streets (PDF). Green streets have additional vegetation and improved bike and walking infrastructure like attractive paving materials and comfortable street furniture. On 43rd, for example, the plans call for a widened sidewalk up to 20 feet on the north side (where most people will be walking between the station and campus), street trees, and raised intersections at Brooklyn Avenue and The Ave. Brooklyn Avenue between 45th and 43rd will be curbless and intended for a daily offshoot of the neighborhood’s popular farmer;s market. The green streets will be implemented only piecemeal, however; construction will be done by developers whenever their project necessitates the street beside their property be torn up for other upgrades. But Sound Transit’s construction is adjacent to a considerable portion of the designated green streets, so big improvements can be expected by the time the station opens in 2021.

Another east-west idea is midblock pass-throughs. The neighborhood’s north-south street grid is coarse, with average blocks being 500 feet long and 250 feet wide. Pass-throughs, essentially east-west alleys, could allow people to walk through the middle of long blocks. Like pocket parks, this idea could be implemented through regulations or incentives for redevelopment. Alley activations can also enliven neglected public space, and can be done incrementally with business support, material improvements, and event programming. Cafe Allegro, for instance, has its only entrance on the alley between 15th Avenue and The Ave but is highly popular. The University Bookstore is likely planning to convert its parking lot into a structured garage, which presents an opportunity to improve the adjacent alleyway. The fifth idea is a key north-south spine that consists of a street treated as a linear park. During the second forum meeting, most breakout groups identified 12th Avenue, Brooklyn, and/or The Ave as this key corridor. 12th Avenue is currently being converted to a neighborhood greenway, which is a safer and calmer street achieved through signage, intersection improvements, and speed limit reductions. Brooklyn Avenue’s green street improvements, which includes an uphill bike lane, are also intend to extend north to Ravenna Boulevard and south to Pacific Street. Additional street trees can contribute to a sense of uniform character along at least one of these corridors.

The sixth, and perhaps most significant idea, is to identify a site for a publicly owned central plaza. U District Square has been the lead group on this effort for several years, and the idea has been floated for decades. Attendees emphasized that the light rail station presents a a once-in-a-lifetime chance to establish a central open space that forms the identity of the neighborhood. The ideal size for the central plaza would be a quarter acre, which is similar to the scale of the well-used Hing Hay Park in the International District. The developable area atop the station will be 18,000 square feet (.41 acres), but the UW owns the air rights and seems to be resistant to any idea but building office space there. Whether the plaza is built over the station or not, it was agreed that it should be centrally located and preferably along The Ave. Several sites near the intersection with 43rd Street, including the outdated post office and single-story commercial buildings, also present opportunities for acquisition. Rather than waiting for properties to come up for sale on the market or resorting to eminent domain, the consultants plan to recommend aggressively talking to property owners who may be thinking about selling.

Other thoughts that came up during the discussion period were specific suggestions for each of the above ideas, such as ensuring maintenance funding is adequate and that buildings surrounding the public spaces enable “eyes on the street” to promote safety. One audience member suggested studying a freeway lid over I-5 between 45th and 50th Streets, similar to the idea for downtown lids. The Ave is identified as a future streetcar route that will connect to Eastlake and downtown, a concept I explored in detail in another post. The idea of closing it off to car traffic and converting it to a pedestrian mall was also brought up by the audience. Other ideas for The Ave include additional street trees or a planted median north of 50th Street, where the street widens. And though it’s a less likely candidate for a north-south green spine, I’ve also done some preliminary designs for a road diet on 15th Avenue that includes protected bike lanes and additional street trees.

With this meeting, the formal public process comes to an end and the consultants and city staff will work to publish the updated neighborhood parks plan over the next few months. A draft of the neighborhood upzoning is also to be released the early spring, which is a chance for residents and businesses to provide further input on the growth of this vibrant urban center. Signup for updates on the U-District’s urban design project page.