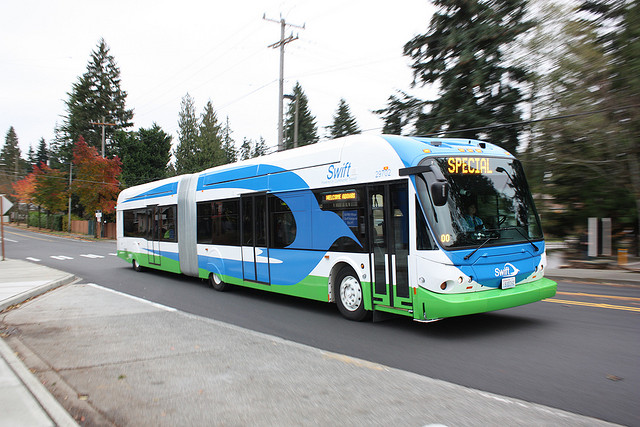 Last week, we reported on Community Transit’s future plans for Swift II, a new bus rapid transit line in Snohomish County that would connect Canyon Park (Bothell) to Paine Field (Boeing-Everett). The pieces are quickly falling into place for the project with newly granted approval by the Federal Transit Administration (FTA) to proceed with project development. This is an important step because it means that the project could qualify for the coveted and valuable New Starts grant program. Earlier this year, the agency received a $3.3 million dollar grant from the FTA to proceed with design and environmental analysis on the line.

Community Transit has a lot of work left:

Working with local and state agencies are manageable issues for the agency. New taxing authority would come through a local options sales tax that the Governor proposed last week. It is unknown if such a proposal will be successful in the 2015 Legislature. Meanwhile, if the application by Community Transit rates high enough, it could qualify for the New Starts funding in the next two years. The agency believes that the soonest deployment of Swift II service could be early 2018.

Besides new stations, buses, and high frequency service, a key element for the deployment of Swift II is the construction of Seaway Transit Center as the line’s northern terminus. This facility would be located on property currently owned by Boeing at the Everett plant. The approximate location is expected to be around Boeing Access Road and Gate E-77, just west of Seaway Boulevard. Boeing already funds a custom route by King County Metro Transit designated as Route 958, which loops around the campus and serves Gate E-77. Adding a transit center here is a logical decision. Boeing has a very high volume of employees that come and go from the plant 24 hours a day. Ridership is already built in. But this location also has a benefit for residents and commuters. The new transit center would provide a connection point for many local Community Transit and Everett Transit routes as well.

Earlier this month, the Washington State Department of Transportation (WSDOT) picked the Seaway Transit Center as a candidate for their Regional Mobility Grant Recommend Project List. If funding becomes available, WSDOT could award up to $6.8 million to Community Transit. The grant would allow Community Transit to both assemble land and design the transit center. It is anticipated that funding could roll in over the next four years.

In a press release by Community Transit, US Senator Patty Murray (D-Washington) was quoted as saying:

This approval from the Federal Transit Administration is an exciting and important next step toward making Swift II a reality. Snohomish County commuters, businesses and families have already seen the benefits of the first Swift line, and I will continue working with Community Transit and federal transportation officials to move this project forward.

Murray has done a lot for local transit thanks to her power as Chair of the Senate Transportation Appropriations Subcommittee. In the past decade, she has delivered more than $1 billion towards new capital transit projects like Link Light Rail, Seattle-Portland high speed rail, Swift, and RapidRide to name a few. While her position in Senate will be changing come January due in part to the Republican takeover, we hope that she will continue on the Subcommittee as Ranking Member. Her presence is invaluable to delivering key transit funding to projects in Washington like Swift II.