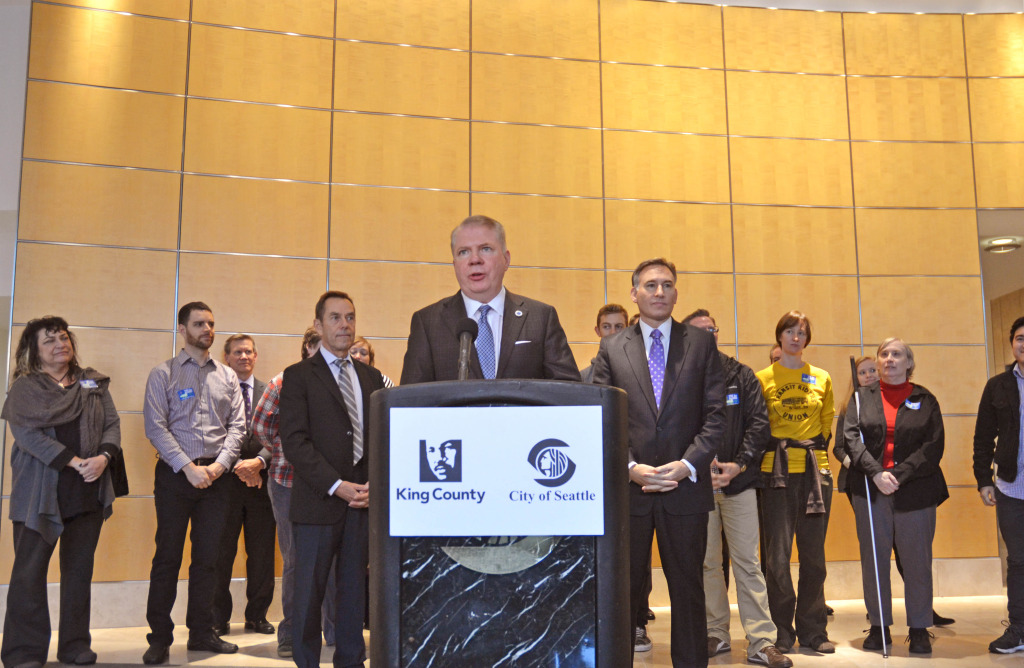 Last year was a very uncertain time for transit in Seattle. At the beginning of it, we were bracing for service reductions by as much as 17% over a two-year period. Some measure of hope was given by a countywide ballot in April to prevent service reductions. But that vote was narrowly defeated by exurban and rural voters. Seattle then mulled over an idea to save its service in the aftermath while King County Councilmembers fought over how to forestall or lessen the impact of impending cuts. The bloodshed began in late September as the first round of service reductions went into effect, mostly affecting peak-oriented trips. But things changed rapidly. King County managed to call off all planned cuts in early October and Seattle voted overwhelmingly in favor of taxes to increase bus service.

Increase. A year ago, that word seemed almost impossible. Frequent Network Plan? Pure fantasy. We had buses to kill, or at best save. But now we really do get to talk about increasing service, and the Mayor has just the plan to do it.

On Monday, the Mayor summarized how important his plan for increased Seattle bus service is:

By adding more than 200,000 more hours of bus service annually, we can ensure that transit expands along with our growing city. This voter-approved investment in additional service will help make transit a better choice for everyone in Seattle, and is the first major expansion of bus service in our city in almost a decade.

Under Seattle Mayor Ed Murray’s plan, the city would see 223,000 service hours annually added to the baseline service that we see today. A strong focus of the service hours are geared toward reducing crowding and improving reliability of existing routes. Service hours will be targeted at adding frequency on 34 high-demand routes, revising schedules of 48 routes that are chronically unreliable, and adding new buses to 16 routes that are severely overcrowded. Hours that are added to increase frequency will be allocated toward all service periods: peak, off-peak, weekend, and night. The latter three should be especially good news to bus riders.

In addition to this, a small sliver of funding will go toward partnerships with other jurisdictions ($3 million annually) and social welfare ($2 million annually). The voter-approved measure allows the City to enter into contracts with other cities that want to cost-share routes that also serve Seattle. These types of routes would exceed Seattle’s standard requirement for full subsidy (routes that operate at least 80% of their service hours in the city can qualify for full funding). An example of cost-shared services might be peak commuter routes like the 158 (Seattle-Kent-Covington) or 212 (Seattle-Southeast Bellevue). If the pair cities are willing to pay for a portion of the service cost, Seattle could pick up the remainder to keep or add these long-distance services. Meanwhile, the new ORCA LIFT program for low income earners will receive funding assistance from the City. Fares under the program are reduced for many services like King County Metro, the Seattle Streetcar, and Central Link Light Rail.

The terms of the contract create a very unique situation for the newly formed Transit Division of SDOT. While service planning and implementation will be collaborative between SDOT and King County Metro, SDOT will still have a strong say in what types of service treatments individual bus routes will receive under the partnership. To help guide the allocation of service hours and improvements, the agency will use the City’s adopted Transit Master Plan and the baseline Service Guidelines promulgated by King County Metro itself.

The first step to making all of this a reality is the execution of a contract for service between the City of Seattle and King County. On Monday, the Mayor’s Office said that this should happen very soon after the City Council has had an opportunity to review and approve the final contract language. The Mayor sent the contract to Council the same day. King County Executive Dow Constantine also sent the same contract language to the County Council for review and approval on Monday.

The service increase is only possible because of the successful vote for the Seattle Transportation Benefit District Proposition 1 in November. This measure ensures that at least $45 million in earmarked revenue will be collected through a combination of an annual vehicle licensing fee and sales tax increase. The annual vehicle licensing fee is $60 and sales tax increase is 0.1%. The Transportation Benefit District has the authority to levy these revenue sources for six years.

Under the terms of the contract, the City and County will enter into a binding agreement for three years worth of service increases at a total cost of $120 million. The contract could be renewed for a further three years, which happens to coincide with the life of the voter-approved revenue source. The rounds of service increases will occur this year: one in June and the other in September, each coinciding with King County Metro’s regular service changes.

UPDATE: Seattle Transit Blog has additional information on how the service hours will be allocated route by route. You can read the contract language and King County Council’s ordinance here and here, respectively.