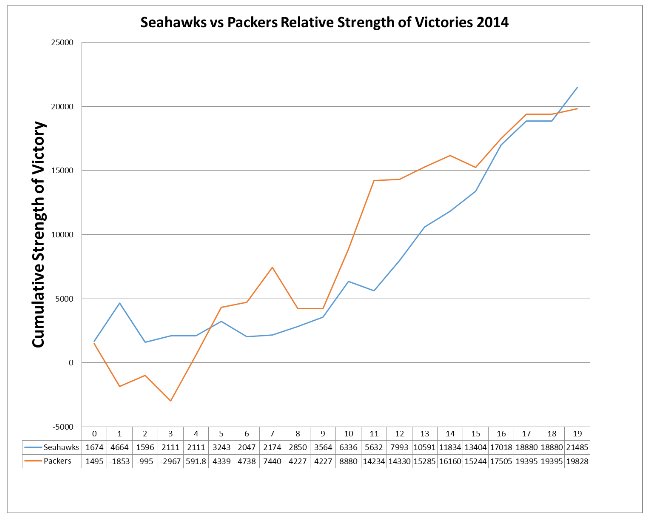 It’s the NFC Championship fellow Urbanists! I’m sure you’ve all noticed that the Town has been electric since Thanksgiving when the Hawks started their current 7 game win playoff run. The Green Bay Packers are guests in our house at 12:05 PM today and it’s going to be a blast! The road to the Super Bowl in Glendale, AZ will continue for us after today’s game and here’s why:

After mashing up all those numbers on a week by week basis, I was able to chart the ongoing strength of victories relative to their opponents for both the Seahawks and the Packers. This is what I found: As you can see, in week 1 the Packers dropped due to a vicious 20 point beating from the Seahawks offense and stifling defense. They continued to drop in cumulative strength in week 3 with a loss to the Lions. The Pack didn’t really hit the gas until week 10 and 11 when they badly beat the Bears and the Eagles.

As you can see with the Hawks, the season started with a bang in week 1 and a loss in week 2. The beginning of the season was a hard one. Sure there were victories but they were close which the RSVRSO doesn’t reward greatly. But then there was Thanksgiving when our Seahawks beat the Santa Clara 49ers in Santa Clara 19-3. The Hawks haven’t looked back since. Now here is the most tantalizing graph: The Hawks’ season can be best fit with an exponential curve. The Packers’ season is best fit with a logarithmic curve. Exponential curves start slow in the beginning but gain steam further along the x axis (later in the season.) Logarithmic curves peak early but plateau further along the x axis. While these teams may be close in final RSVRSO, the charts of their seasons are drastically different. One spells a trip to the Super Bowl. The other spells the fate of most visiting teams in the Clink.

UPDATE: This article has been fixed since publication. Apologies for the graphical errors.