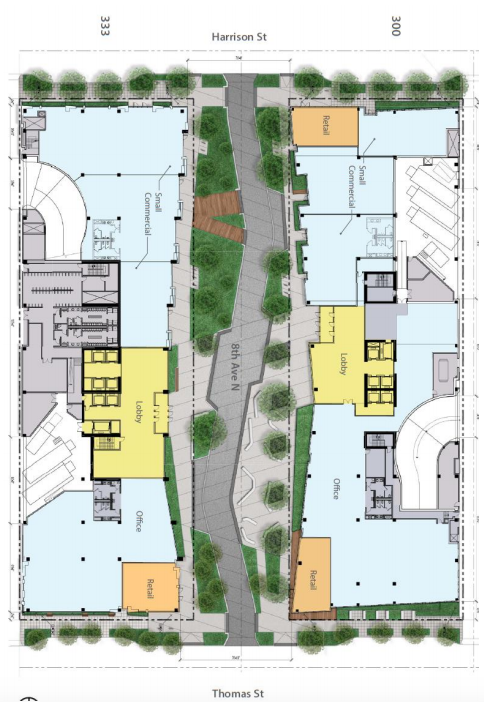 Last Tuesday, the Seattle City Council Transportation Committee discussed the creation of a woonerf along 8th Ave between Harrison St and Thomas St in South Lake Union. The woonerf (a living street designed to slow traffic and prioritize pedestrian activity and green space) would be part of a public private partnership between the City and the developer, Vulcan (Paul Allen’s real estate company, which owns much of the neighborhood).

Vulcan is willing to enter into agreement with City to develop the block as a woonerf in the spirit of the South Lake Street Concept Plan. The plan, adopted in 2013, calls for a 16-block area in the southwest corner of the neighborhood near Denny Park to be preserved for primarily residential development.

The woonerf development agreement calls for a raised, curbless  street with a preserved, dense tree canopy; wide sidewalks to accommodate multiple activities; and furniture including tables, chairs, and custom concrete seating. Current City code would only require Vulcan to make minimal improvements, such as repaving the sidewalk and installing a five-foot wide planter strip.

As part of the agreement, the Seattle Department of Transportation (SDOT) would waive street use fees for the project (valued at $527,000) in exchange for Vulcan assuming the full cost of the project ($2.1 million) saving the City $1.6 million. Street use fees are applied to construction that interrupts the right of way, such as equipment storage on the road or sidewalk.

Councilmember Mike O’Brien voiced concern over the project’s departure from the adopted 2013 plan for the corridor. The 16-block area was rezoned to discourage commercial development, with the commercial Floor Area Ratio (FAR) being reduced from 4.5 to 0.5—equivalent to approximately half a block of commercial development on the ground floor, or a small corner shop.

Vulcan submitted their application two months prior to the implementation of the new zoning code, exempting them from the strict residential requirements. O’Brien expressed that this may be a “fatal blow to any future residential development,” thereby sinking the vision for the entire area. He said he feels that the City is giving away public right-of-way to become a “corporate office park” as opposed to a “vibrant residential community.” He then suggested reallocating funds to a residential project, and expressed that he is not prepared to support the project at this time.

Councilmember Tom Rasmussen, appearing to try and assuage O’Brien’s concerns, pointed to the residential development that has already taken place in the rezone. He also emphasized the mixed-use nature of the zoning, though this perhaps overstates the half-block allocation per development.

The Committee agreed to hold the proposal until the next meeting to receive further comment from the Department of Planning and Development (DPD).

If you would like to get involved, you can submit public comment and attend the next Transportation Committee meeting on Tuesday, January 27th at 9:30 AM at City Hall.

UPDATE: The Transportation Committee has postponed a follow-up discussion on this issue until Tuesday, February 10th at 9:30 AM.