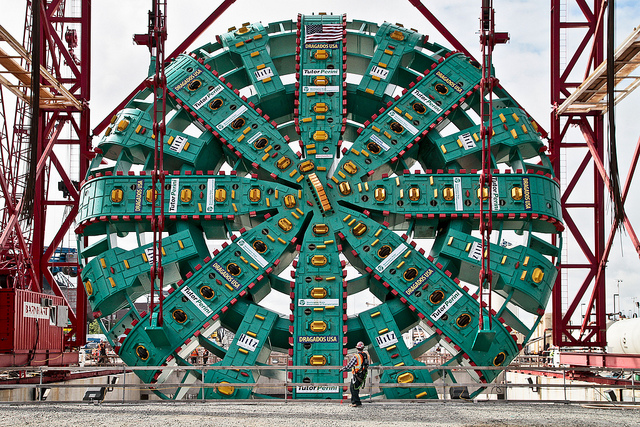 People keep asking “When will the SR-99 tunnel be complete?” It’s a great question because right now is seems more likely never. We thought the new tunnel would wrap up digging and open in late 2015. Then it got pushed back to 2016. And now it’s maybe August 2017 at the soonest, but even WSDOT doesn’t buy that.

Why the creeping schedule? Well there’s no certainty that Seattle Tunnel Partners (STP), the contractors leading this catastrophic project, will actually successfully dig down to the tunnel boring machine cutterhead and replace it by April. In spite of a sinking Pioneer Square, the contractors continue their effort to reach the cutterhead in earnest, dewatering the waterfront and Pioneer Square in the process. The excavation effort remains a mere 6 feet from the cutterhead, but as we have all observed, this project has lurched from one disaster to another usually without notice.

Even if STP does manage to daylight the cutterhead and boring machine, Bertha may be totally unfixable, end up in lengthy lawsuits, or breakdown again in Downtown. And then what?

Who could beat Bertha?

So while Bertha’s laying patiently in her lonely, cavernous tunnel, we thought it would be useful to entertain a thought exercise. How many times could you walk the length of Bertha’s alignment before she makes it to the North Portal?

Trick question! An infinite amount of times. While we’re pretty certain that this tunnel project won’t be completed, we did run the numbers just for kicks and grins.

Let’s suppose that Bertha somehow makes it to Thomas Street by October 2016: a comparable walk would take an average of 44 minutes to go one way along a 2-mile corridor. We estimate that you could walk the length of Bertha’s alignment about 18,980 times*, or the equivalent of  37,960 miles, between now and then. With that amount of walking, you could go from one end of SR-99 to the other in Seattle 2,480 times, travel between Seattle and New York City 15.7 times, or go around the globe 1.5 times. You could even get nearly 1/5th of the way to the moon. Walking.

If somehow the SR-99 tunnel project reaches completion (and that’s a big “if”), we’re betting that it will be beat by an early opening of Northgate Link. Yes, that tunnel project is considerably longer: 5.2 miles longer** to be exact! And, it isn’t even slated to open until 2021. However, Sound Transit has oscillated from being ahead of schedule to just on-time with an exceptionally generous project float time. But word is that it could open as early as 2019. That’s how much more confidence we have in Sound Transit than WSDOT.

Why is that? The simple answer is that Sound Transit has a great track record of successfully delivering complicated tunneling projects on-time and under-budget. University Link is the poster child of good tunneling projects with opening of the line in the first quarter of 2016, a solid 6-8 months ahead of schedule. We expect the Northgate Link schedule to contract while the SR-99 tunneling project schedule will continue to balloon–until it’s ultimately cancelled.

So, keep walking folks. You’re faster than Bertha, and that’s saying a lot.

*Based upon 580 days to completion of tunnel boring in October 2016.
**The Northgate Link project involves twin-boring the length between Northgate and UW Station, a distance of 3.6 miles per tunnel.