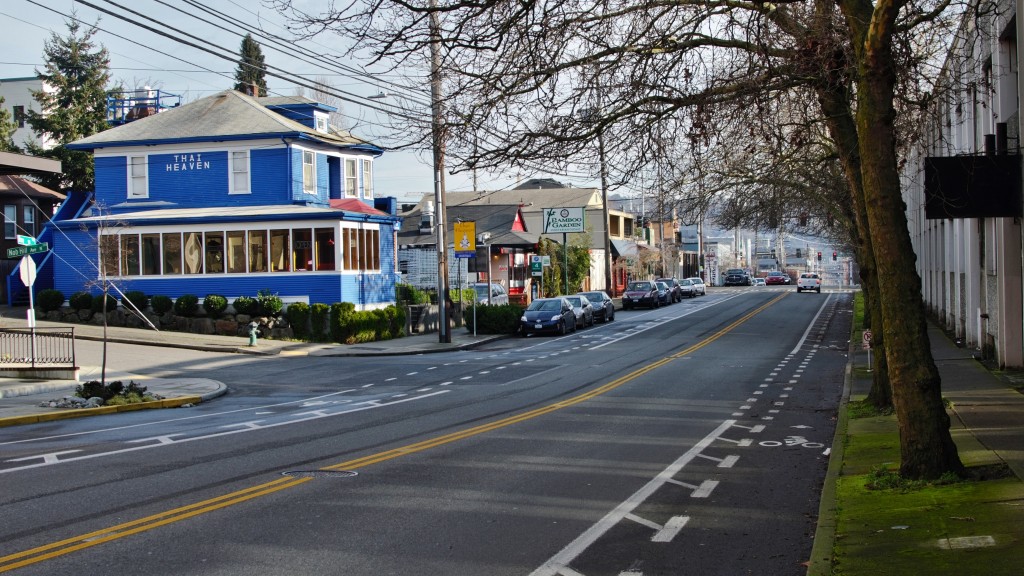 Roy Street serves as the main bike arterial between South Lake Union and Lower Queen Anne, passing north of Seattle Center. As part of the Mercer Corridor Project, the street was changed from a wesbound one-way street to a two-way street. Buffered bike lanes were added on either side of the street during the process. The City of Seattle identifies the painted bike lanes as ideal in the Bike Master Plan, however with growing demand in that corridor, a protected bike lane should be added.

Roy Street is broken into two segments by Aurora Avenue (SR-99). The segment on the west side runs from Queen Anne Ave to 5th Ave and on the east side from Dexter Ave to Fairview Ave (also called Valley St in some places). These two segments have many differences, so the protected bike lane configuration would not be the same.

Since there is no on-street parking on the south side of the Roy Street, it would be easy to lay down a cycletrack along it. To do so, the westbound bike lane would need to be relocated from the north side of the street and incorporated into the cycletrack creating a two-way bike facility. Bollards added to the already-existing (though relocated) buffer would separate it from traffic. SDOT should place other safety devices like green paint at intersections and driveways, and post no-turn-on-red signs for vehicles headed eastbound on Roy St and northbound on side streets. These would ensure that drivers are aware of cyclists and stay out of the bike facilities. Given the layout of Roy St here, bike-specific signals are not necessarily warranted at this time as turning movements are limited, except at 5th Ave where the cycletrack would end anyway.

The eastern segment of Roy Street differs from the western segment in that the parking is present along the south side of the street instead of the north side. The street also crosses each direction of the South Lake Union Streetcar tracks at 45-degree angles along two intersections. Bikes must cross rail tracks at a right angle to prevent the rail from grabbing the tire and causing falls. Since parking is provided along the south side of the street, the cycletrack would be located on the north side. However, there still are a couple of obstacles to overcome.
On the east-west block from Terry Ave to Westlake Ave, there is a right-turn lane on the north side of the street, and between Boren Ave and Terry Ave there is a four-car passenger loading zone on the north side of the street. The right-turn lane would be relocated to the outside of the cycletrack, and turn movements at Westlake Ave would be restricted by the already-existing right turn signal. The cycletrack would need to curve into the passenger loading zone, perhaps reducing the capacity of it by two cars, but improving the safety significantly.

Since Roy Street does not have a bridge over or under Aurora Avenue, bikes must head over to Mercer Street, a block south, to cross the busy highway. For bikes, the shift from Roy St to Mercer St is done via 5th Avenue. 5th Avenue would include bike lanes from Roy S to Mercer St, but then transition to a sidewalk-level cycletrack on the west side of the street. The Bike Master Plan identifies 5th Avenue as needing a protected bike lane up to Roy Street from Denny Way. However, the Mercer Corridor Project will likely only provide a painted bike lane.
If left as it is, the Mercer-to-Roy block will be one of the most confusing and least efficient bits of bike infrastructure around. Under the current configuration, a cyclist traveling northbound on the 5th Ave cycletrack would have a very challenging time trying turn left onto Roy St and head westbound. The reason for this is that SDOT will deploy a cycletrack on the west side of 5th Ave south of Mercer St, but north of this, regular bike lanes are on either side of the street. A cyclist in the cycletrack would be forced to to exit it at the intersection with Mercer St and enter a precarious confluence of conflicting traffic movements–all before crossing to north side of the street. But if that weren’t bad enough, a cyclist would again have to cross 5th Ave to make a left at the following light at Roy St. Zigzagging–and dangerously at that–will not be popular with regular cyclists.
All of this could be simplified. The City should shift the bike lanes on the 5th Avenue block between Roy and Mercer to the west side of the street. By doing so, continuous cycletracks would create a safe and simple solution for bikes.

On Roy Street west of Aurora Avenue, the bike lanes are moved to the south side of the street into a protected bike lane, from Queen Anne Ave to 5th Ave (a total of seven blocks). On the part east of Aurora Ave (Valley Street in some places), the bike lanes are moved to a protected bike lane on the north side of the street from Dexter Ave to Fairview Ave (a total of six block). On 5th Ave between Mercer St and Roy St (one block), the bike lanes get moved to the west side of the street, lining up with the other block of protected bike lane from Mercer St to Republican St.
The  city’s bike network would see 14 blocks (nearly a mile) of added protected bike lanes under this proposal. While this may seem small, it would be a huge boon for cyclists who want to travel cross-town or access other key facilities of the wider bike network. But it’s more than just convenience and connectivity, it’s a seamless set of facilities that would serve all ages and abilities; a big change from the current arrangement, which is less safe and more geared toward vehicular cyclists.