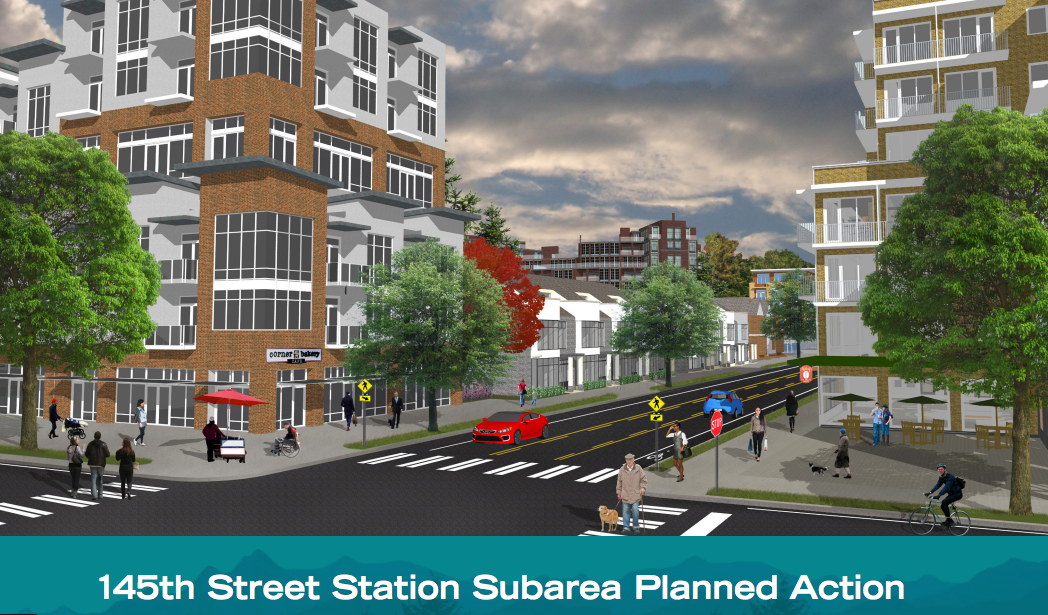 For many, Shoreline is just another suburb of Seattle with quiet streets, ample single-family housing, and auto-oriented shopping centers. But peel back a bit of history and you’ll see that there’s more to Shoreline. From the outset, the city was established first and foremost as a rail community. Founders saw a huge opportunity for growth with the coming Great Northern Railway, and in 1890, they platted the Richmond Beach area (which today forms northwest Shoreline). But it wasn’t until the arrival of the Interurban Streetcar, a frequent rail service running from Seattle to Everett, that really made growth began to take off.

As high quality roads and highways were laid down like the North Trunk Road, the competitive advantage of the Interurban rapidly died way. And by 1939, service on the line finally came to an end. But Shoreline, didn’t. The city continued to grow, and not like that of typical suburbs. Early on, the city had a very useful grid due to traditional platting, great public amenities, and vital commercial centers dotting the flourishing neighborhoods. Today, the city is home to over 53,000 residents and now stands at a crossroads of return to its roots as a rail city.

With the prospect of being served by two North Link light rail stations by 2023, the City wants to help make the most of these high quality transit investments. Right now, the City is in the process of exploring and adopting alternatives to accommodate more housing, jobs, and business opportunities in close proximity to the light rail stations. Specifically, the the City has been extensively studying subarea plans for two locations centered on I-5 and 145th St, and I-5 and 185th St.

Shoreline could take a unique approach to rezoning the area around the future 185th Street Station. Three phases of progressive rezones could occur between now and 2033. Phase 1 would be adopted by Council ordinance on February 23 while Phases 2 and 3 could each be unlocked in 2021 and 2033, respectively.

This is a substantial change from what was originally considered by Council in August 2014. At the time, the Council had stated their preference for an areawide rezone, with Alternative 4 as the preferred choice. However, the Planning Commission later met on the matter and urged the Council to reconsider an areawide rezone. Instead, the phased approach emerged in order to control the pattern of development within the area, before and after the implementation of light rail.

Alternative 4 would allow a significant increase in growth. Currently, the subarea has 7,944 residents and 3,310 dwelling units, but it could grow by as many as 5,399 residents and 2,190 units, representing at 68% increase in population. Meanwhile, 928 employees could be added over the current baseline of 1,448 employees, a 64% increase in jobs.

Shoreline planners want to use the traditional “wedding cake” approach to zoning around this station area. It’s a common approach where zoning runs on a gradient of intensity; highest in the core and least at the fringes. Most growth will be focused near the core area of the light rail station, and to a lesser degree along the spine of 185th St. Zoning intensity generally drops every two blocks beyond the core area and spine.

Blocks immediately surrounding the light rail station would be zoned MUR-85. New development could be mixed use in nature and house buildings up to 8 stories (85 feet) in height. Meanwhile, the spine along 185th St would connect the light rail station to Shoreline’s town center area. These blocks would be zoned MUR-45, which would allow a mix of uses and building up to 4 stories (45 feet) in height. 15th Ave NE, a major north-south street, would be rezoned to CB, a commercial business zoning type. And, areas toward the fringes of the subarea could be rezoned to MUR-35, another mixed use zoning type. Buildings could be up to 3 stories (35 feet) in height.

Two separate options are still under consideration in addition to the above. Essentially, it comes down to how expansive the initial rezone would be with Councilmember Roberts suggesting Option 1 and Option 2.

Under Alternative 2, mixed use zoning would stretch along major streets like 145th St, 155th St, and 5th Ave NE. And, a core area would be established between the blocks of Meridian Ave N, NE 155th St, 15th Ave NE, and NE 145th St. The intent of this alternative is to mix density into the single-family residential areas in a modest fashion while creating a network of improved streets and connected mixed-used areas.

Alternative 3 takes a completely different approach to development. Density is focused closest to the station area while precluding the connectedness between centers like the Aurora Avenue corridor and the business district centered on NE 165th St and NE 5th Ave. Instead, development in the core could would be slightly broader with increased heights to 8 stories (85 ft) between the blocks of 1st Ave NE, NE 154th St, 8th Ave NE, and NE 145th St. Heights would drop dramatically to 4 stories (45 ft) on some block, or immediately to 3 stories (35 ft), resulting in a patchwork of density throughout the area east of I-5. The neighborhood business district at NE 145th St and 15th Ave NE would also receive some measure of increased development opportunity. It, too, would be rezoned to permit 8-story buildings.

There’s a lot to like about both of these options. The benefits of the Connecting Corridors alternative is clear: it opens up a broad set of areas for modest redevelopment and growth while bridging neighborhoods together with safe street infrastructure and business/shopping opportunities. On the flip side, the Compact Community alternative really does give serious options for growth by allowing a range of building types above and beyond that of Connecting Corridors. But, it does suffer from lacking the areawide nature present in Connecting Corridors. It also may not be reasonable to expect 8-story development to occur since the cost of construction goes up quickly once you pass 5-over-1 (i.e. woodframe construction). Meanwhile, Connecting Corridors severely restricts options for varied development types, which is possible in the Compact Community alternative.

The City will take up the issue of selecting a preferred alternative for the 185th Street Station Subarea on Monday, February 23rd. Also, the City will be taking up comments on the Draft Environmental Impact Statement on the 145th St Station Subarea plan on Thursday, February 19 (tomorrow). In both cases, you can make comments on all facets of the plan changes, so please be sure to share them with the Shoreline City Councilmembers and Shoreline planning staff.