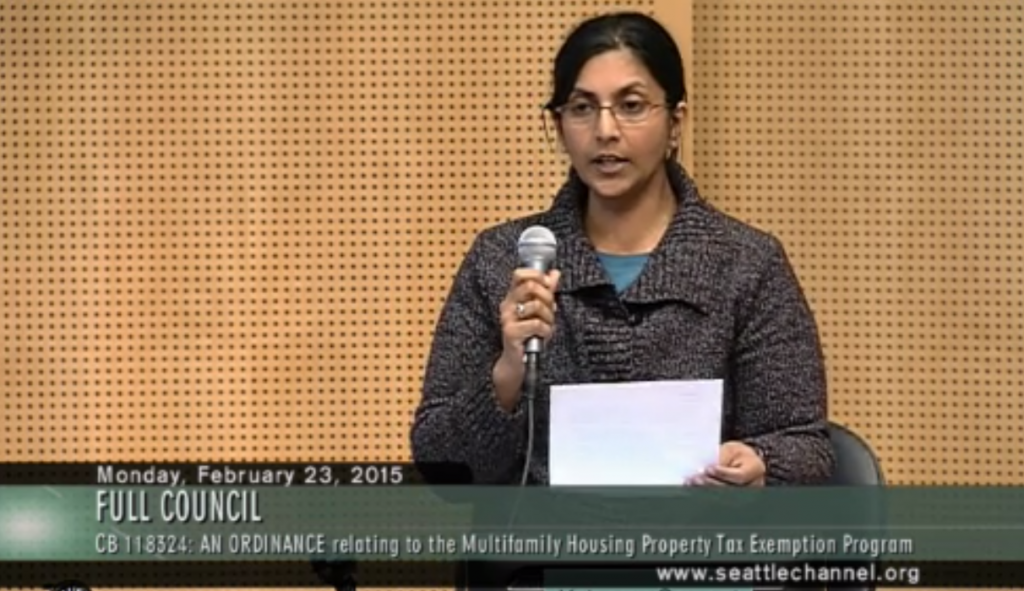 In a 8-0 vote in favor yesterday, the Seattle City Council approved a change to the Multifamily Housing Property Tax Exemption Program (MFTE) on small efficiency dwelling unit developments (more commonly known as microhousing). The MFTE is a voluntary program for housing developers to provide income-restricted units below certain Area Median Income rates over a 12-year period. During this timeframe, property owners are exempt from paying property taxes to the City of Seattle.

Councilmember Sally Clark introduced the legislation by saying why it was necessary: “With the small efficiency dwelling units, we need to adjust the income downward to ensure that we are not giving a public benefit, the forgiveness on property tax, without getting enough of a public benefit in terms of the rent level.” Essentially, the prevailing thought on the issue is that developers could end up with a windfall under current MFTE rules for small efficiency dwelling unit (SEDUs) developments. Under the MFTE rules, developers could charge a maximum income-restricted rent very close to or more than most market rate SEDUs. This of course would create situations where the “affordable units” aren’t actually more affordable than other units, and grant the underlying property owner significant property tax savings.

Prior to yesterday’s vote, SEDUs were treated as studios for the purposes of the MFTE. Eligible projects under the code were required to provide 20% of all studios as income-restricted units at or below 65% of the Area Median Income in order to qualify for the MFTE. This translated to a monthly maximum housing cost of $1,004 and maximum annual income of $40,170 as a single individual.

Two versions of the Council bill were floated. The first was presented in committee before being referred to the full Council. That bill explored a lower requirement for the number of income-restricted units in SEDUs. The committee identified a target of 20% of units as income-restricted. However, Councilmember Nick Licata felt that there needed to be a greater public benefit, which led him to propose his own amendment to the bill. Language in Licata’s amendment sought to increase the number of income-restricted units by another 5% for a total of 25%. Clark summarized the changes in detail during the Council legislative session by saying that:

This legislation would actually move the rent level, the affordability down to 40% of the Area Median Income for the set-aside units. In Committee, it was changed from a 20% set aside to 25% set aside. I’ll be very clear, the Office of Housing’s calculations indicate that a 25% set-aside is a stretch beyond what developers will likely use. Having said that, since we adjusted the rules for the small efficiency dwelling units, we don’t have any projects to base the projections on, and a bit of this is guesstimating, and trying to figure out what we think the market will do.

Essentially, the new MFTE SEDU rules set a maximum rental rate for income-restricted units at $618 per month and a maximum annual income of $24,720 for a single person. This number would certainly be below most market-rate units in SEDU developments. Although, there could be cause to revise the numbers upward or downward for SEDUs in the future. Clark hinted that this would likely happen anyway as the City would explore program-wide changes to the MFTE code later in the year. Additional revisions to the SEDU MFTE rules could happen at that time if necessary.

Before the final vote, Councilmember Kshama Sawant both praised and critiqued the MFTE program.

For every single building that takes advantage of this program, the City is giving a greater tax break than we are getting back in term of affordability. In every example, mathematically, we could make more affordable housing dollars available simply by collecting the taxes from developers and using that money to offset rents. And while I think we should try to make this program better for housing affordability, in reality, we have to be clear that this in many way just more of a corporate tax loophole than a real affordability program.

UPDATE (2/24/15 @ 3:03 PM):  It should be noted that Sawant’s comments could be misleading to some. The way property taxes work, the City should collect the same amount of total revenue to fund programs regardless of whether individual properties get tax breaks for programs such as the MFTE or senior housing. The taxes uncollected from individual properties should be spread across the remaining taxpayers.

In 2011, there was a controversy about whether or not taxes were lost or shifted. The final report by the City indicated that in 2013 the City failed to collect $354,000 of the $2.2 million that was exempted by the city through the MFTE, or 16%. With that said, there was an additional $726,000 collected from construction due to the impact on the City’s tax base. To put that number in perspective, it’s less than the $500,000 that the City is forgoing for the South Lake Union green street, which the Council approved in a 6-2 vote, Sawant and O’Brien casting the nay votes.