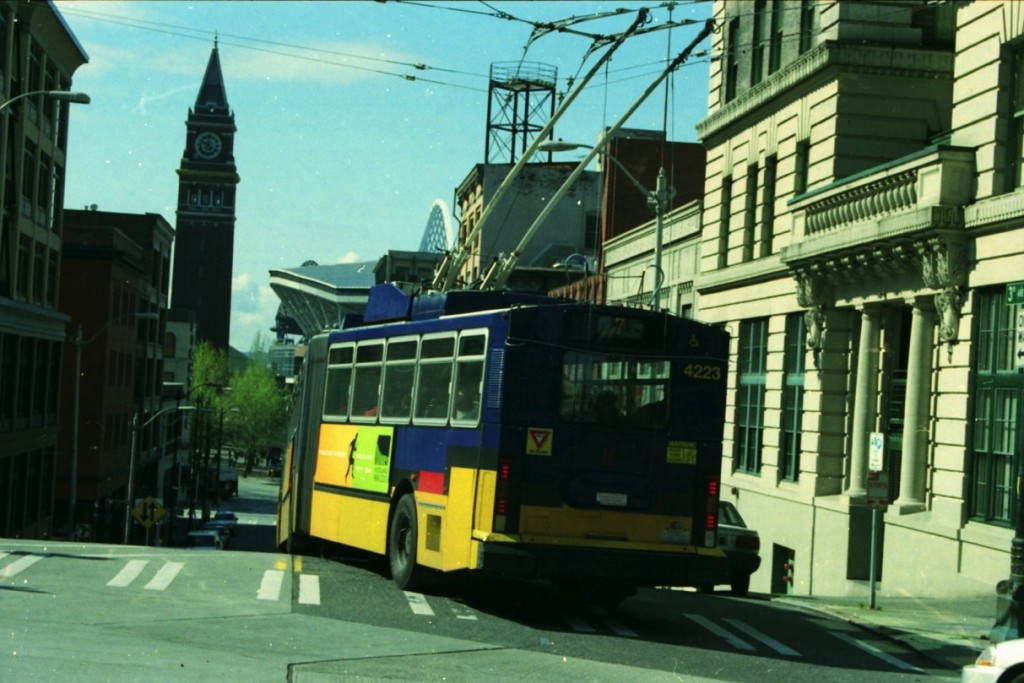 I’m yelling out the window at friendly faces. We’re on the 7, going through lower Pioneer Square. First it’s a man I don’t know, but who knows me. Then there’s the guy who’s always dressed in fluorescent construction gear. There he is, outside the Men’s Shelter deep in conversation with somebody. He recently lost his school textbooks. When I honk to get his attention, his eyes light up. On Jackson, I spy Grover across the street– Grover is a driver, and he bucked the popular trend by actually losing weight when he went full-time. That’s how you know anything is possible!

I hop out of the bus at the red light to look at the exterior signage; someone told me it wasn’t displaying correctly, and they’re right. Later, during the time a new bus is sought for, I will make a handmade sign and hugely enjoy the antiquated throwback nature of such. For now, Grover walks past, asking, “Nathan! Wha’s goin’ on?”
“Oh you know, just hangin’ around on the 7 here! Not a bad way to pass the time!”
He laughs with (not at!) my enthusiasm.
“Have a good one!”
“Have a good one!”

A last minute runner, fumbling for his fare, pulling out a $2.50 ticket– “I’m s’posed to only be paying .75,” he mumbles to himself.
While he’s smoothing out the ticket to put it into the machine my brain cycles through the ideas articulated here, and I say aloud, “you should save that.” Tearing him off a transfer. “Use it for a driver who’s givin’ you a hard time!”
His smile carries the warm, open-hearted realization: ah, the world is not against me. I do have friends out here. “Thank you!” he says, with feeling.

Another fellow, very serious, tanned red by the sun, boards with a gigantic inch-thick steel square. At four by four feet, it looks like it weighs more than I do.
“You’ve got the goods today, I see!”
“Yup.”
“Are you takin’ that down to the Recycling place?”
“Yeah.”
“Excellent.”
“Do they measure the contributions by weight, or…?”
“Yeah, by weight.”
“Well then, looks like you hit the jackpot!”
He grins.

A man and his toddler son form a distinctive pair in the mixed-race tableau of the 7, being about the only Caucasians on board.
The child is curious about God. “Did Jesus die?” he asks, wide-eyed.
The father replies without concern for being judged or ridiculed by those around him. They discuss theology in subdued tones, the father gazing out the windows from time to time, as slanting afternoon sunlight glances in. I’m reminded of Rockwell’s Saying Grace. As they exit, Dad says to me, “you’re kinda like the mayor of the number 7!”

As night approaches, Eric steps in, introducing me to a friend of his (“this is Mike.” Mike nods). Eric is tall, dressed in large, dark, faded outdoor wear, textures of plaid and padding, well-used denim built to withstand the strain of a difficult life. He has a perpetual baseball cap and long stringy hair framing a gaunt, pale, hollow, and loving face. Blue-gray eyes which have seen much, and yet aren’t afraid to wear emotions easily. You know the type. He would travel four hours to see his aging mother in Bremerton once a week no matter what, until he one day told me she had passed. You could see how it hurt him. Today he’s happy to have made the bus.

“Oh, hey, Nathan! I wouldn’a jaywalked if I’d known it was you, since I know you woulda waited!”
“I’m glad you made it! I appreciate the hustle!”
After they settle down in their seats, Eric comes back up. “Hey, do you want some girl scout cookies? These are the really good ones. Caramel, chocolate and coconut. With coconut flakes.”
“Coconut, oh my!”
“Yeah, let’s see.” He reads off the gory details. “Crisp cookies coated in caramel, sprinkled with toasted coconut, and striped with a dark chocolaty…”
He had me at crispy. “That sounds outstanding! I would love some!”
“Have you had these ones?”
With enthusiasm: “No!”
“Well hey, why don’t I give you this row, and then these can be mine and these can be for Mike.”
He’s about to give me five cookies! Yes, I am glad he made it!
“Eric, you’re amazing! This is so perfect, because I forgot to bring dinner!” Normally I don’t go for sugar, and as I write this now I can’t believe I actually ate five of these things in one evening, but in my dinner-deprived state my decision making skills were definitely elsewhere. You think differently when you’ve just spent seven hours eating brown rice crackers somebody gave you from the food bank. Plus, uh, coconut’s healthy, right?

After he opens the box and supplies me, he asks the rest of the bus if they want girl scout cookies. Even with the mention of chocolate and coconut, they have more self-restraint than I, or maybe they’re confused by Eric’s ramshackle appearance. I know better though. Looks can be deceiving.