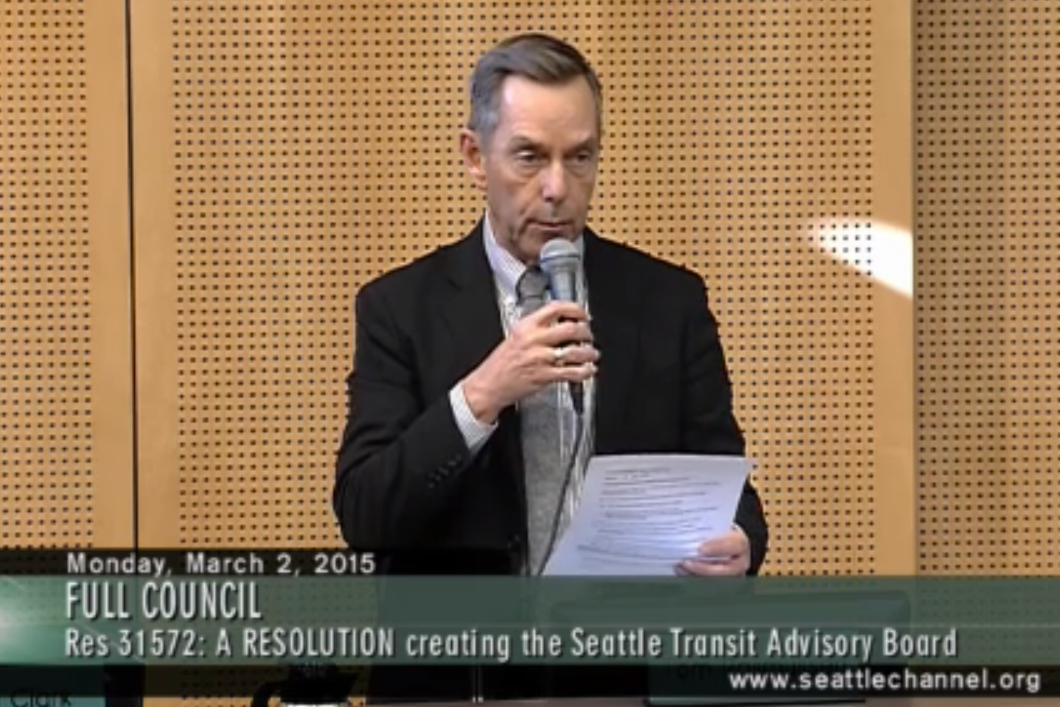 On Tuesday, the Seattle City Council created by resolution a new advisory board to oversee all matters of transit in the city. The new Seattle Transit Advisory Board would consist of 12 board members selected throughout the city. Council President Tom Rasmussen introduced the resolution by describing its ties to the original Proposition 1 measure (the citywide bus funding measure), which called for a citizen’s committee to oversee how Proposition 1 funds are used. Rasmussen enumerated some the primary competencies that Proposition 1 envisioned for the Board:

Responsibilities of the Board include reviewing and providing comments on which routes get investments, and whether they are actually reducing overcrowding and improving reliability, the effectiveness of the use of funds for outreach and access to Metro’s low-income fare, how the vehicle license fee low-income program is being administered, and the status of the proposed Regional Partnership Program which will encourage other cities to participate with us in the enhanced service.

But, Rasmussen noted that the Board’s responsibility would be bigger than just oversight of Proposition 1 funds. The Board would be tasked with directly advising the Council, Mayor, and city departments on the full spectrum of issues related to transit. One of the big priorities for the Board, Rasmussen said, would be to ensure that the Transit Master Plan (TMP) is being realized by the city and local transit agencies. The Madison BRT project is a key element of the TMP, and currently in the planning process by the Seattle Department of Transportation (SDOT). This project, Rasmussen suggested, could be one of the first tasks for the newly created Board to take up and weigh in on.

The new Board would be modeled after other transportation advisory boards like Bicycle, Pedestrian, and Freight. Staff from SDOT’s newly formed Transit Division would be tasked to support the efforts of the Board. And, six of the positions will be appointed by the Mayor, and five by the Council, and one from Get Engaged as a young adult representative. Members will serve two-year terms on the Board, although six of the original 11 members will be appointed for three years to stagger future appointments. Specifically, the Resolution calls for board members to be chosen by the following criteria:

In other words, the Council wants to create a very diverse board that is knowledgeable, uses transit, and comes from various age groups and backgrounds. It’s a sensible approach to get a broad perspective on Seattle’s growing and future transit system. We’ll keep you posted when the board opens up for inaugural membership.