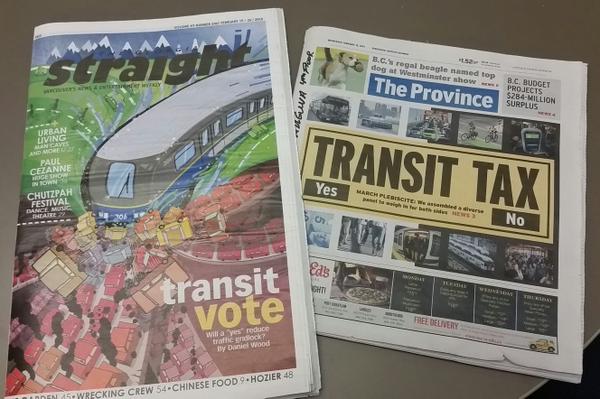 If you haven’t heard, Vancouver is going to vote on a massive transit funding referendum. The vote is for a 0.5% increase in the sales tax that will raise about $250 million a year. If the measure passes, it would be coupled with federal spending that would result in a $7.5 billion (in Canadian dollars) transit investment. It will be the first non-binding vote in Canada’s history in which people will choose whether or not to raise their taxes.

Sales tax increases are frequently opposed for being regressive, and rightfully so. However, a sales tax that funds transit is almost definitely worth it. Paying a little more for goods and services can seem overwhelming for people who struggle with daily expenses, but many of those people are dependent on the most expensive type of transportation: cars. This is especially true for people who live in the suburbs, like Surrey, BC. An advocate of the Surrey Poverty Reduction Campaign captures this dilemma quite well:

Approximately 83% of employees in Surrey use a vehicle to get to work compared with 71% across Metro Vancouver. Only 13% use public transit compared with the regional average of 20%, according to Statistics Canada’s 2011 National Household Survey.

Even though the tax is regressive, meaning low-income people will be more affected than higher-income taxpayers, Sundberg said her organization is urging a yes vote because good transit can be an important benefit to people who are living in poverty.

The measure would make frequent public transit accessible to 70% of people in the Vancouver metro area. Todd Litman goes on to explain why this regressive tax would be good:

“The biggest benefits [of transit] are that it allows households to reduce their car ownership – and the effect is huge,” said Todd Litman, executive director of the Victoria Transport Policy Institute. “The average household in a car-dependent community has one car for every adult, so even low-income households are spending $10,000 a year on owning and operating their car, where that same household in a multi-modal community would be spending half as much.”