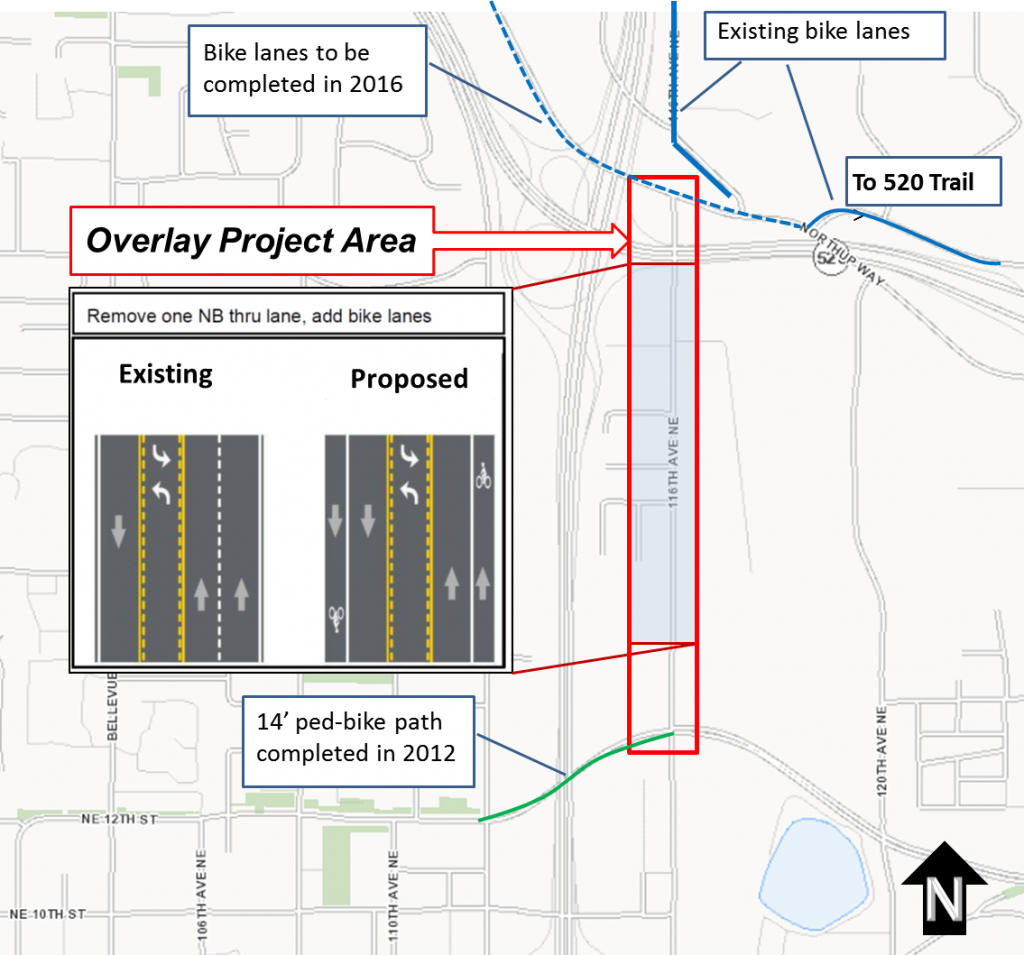 Next summer, the City of Bellevue will repave 116th Ave NE from NE 12th St to Northup Way, north of the Overlake hospital. The city is planning to change the current configuration of the street from two northbound lanes, a center turn lane, and a southbound lane to one lane in each direction, a center turn lane, and bike lanes on either side of the street. 116th Ave NE acts as the main corridor connecting Downtown Bellevue and Kirkland, as well as Redmond and the Microsoft campus via the 520 trail.

The City of Bellevue’s effort to install bike facilities on this crucial part of the Eastside’s bike network are commendable, but its plans show the bike lanes ending well before the intersections on both ends of the street. If not expanded along the entire length of the project, the bike lanes will serve very little purpose as the unsafe intersections would keep many from riding on 116th entirely, even if they would feel safe before they reached either intersection. The current plans would not fulfill the city’s vision to make “biking in Bellevue safer and easier”, as defined in its 2009 Pedestrian/Bike Master Plan.

Another flaw in the proposal is the width of each lane. The planned design places 5-foot bike lanes on the outside of the roadway, and three 11-foot lanes in the center: one in each direction plus a center turn lane. However, those extra-wide 11-foot lanes encourage speeding, as opposed to safer 10-foot lanes.

Last Spring, Bellevue endorsed the NACTO Urban Street Design Guide, which recommends 10-foot lanes, stating that “lane widths of 10 feet are appropriate in urban areas and have a positive impact on a street’s safety without impacting traffic operations.” Bellevue should now practice what it endorsed.

If the center lanes were narrowed to 10 feet, the extra three feet can be distributed to an 18-inch painted buffer for each bike lane. This will increase comfort for people biking and bring the speed of drivers closer to the speed limit. It will bring us one step closer to Vision Zero.

At the south end of the project, NE 12th St, the city states that 116th’s two lanes to the south of the intersection must merge after the intersection to keep traffic moving. This, however, is not true. Just 24 blocks to the east and 12 blocks north, the intersection of 140th Ave NE and NE 24th St used to have a similar configuration with similar traffic volumes. In 2013, the City of Bellevue changed the street design so that the merge occurred before the intersection instead of after, which converted the right lane to a right turn lane. The change happened seamlessly and no backups formed. With the traffic being so similar between the two intersections, this change would also be effective at 116th and 12th.
With one lane north of the intersection gone, bike lanes could be extended all the way to the intersection, making for a much safer route to the multi-use path on NE 12th St’s bridge across 405.
On the north end, the bike lane ends under a dark underpass with low visibility, so collisions would be likely to happen if a driver noes not see a bike. The bike lane should switch between the right and left turn lanes for Northup Way either before or after the overpass, but certainly not under the overpass. There should be a clearly marked (and green-painted) bike lane under the overpass. The bike lane should also be painted green as it crosses the right turn lane.
Right turns on red lights on 116th southbound to 12th westbound should be forbidden in order to keep the crosswalk clear for bikes crossing the road to get from the path to the bike lanes.
Bike lane crossings at driveways and intersections along the segment should also be painted green in order to raise awareness for both people on bikes and in cars.
Please send Bellevue’s City Council a note to make this happen!

Dear City Council,
Thank you for approving bike lanes on 116th as part of the pavement overlay project, but the incomplete design should be refined in order to make biking safer and more attractive along this stretch of road.
The bike lanes should be expanded to the intersections in order to provide a safer route. The northbound lane merge should be placed before the intersection at 12th, as it was recently done at a similar intersection at 140th and 24th.
Traffic lanes should be narrowed to 10 feet, encouraging drivers to drive at the legal speed limit and providing a safety buffer for people biking in the bike lanes.
With these two simple improvements, 116th could become a much safer place to bike, and would encourage many people to do so, fulfilling the City of Bellevue’s goal as stated in the Ped-Bike Master Plan.
[customize your message here]
[sign your name]

Send this to the Bellevue City Council at council@bellevuewa.gov.