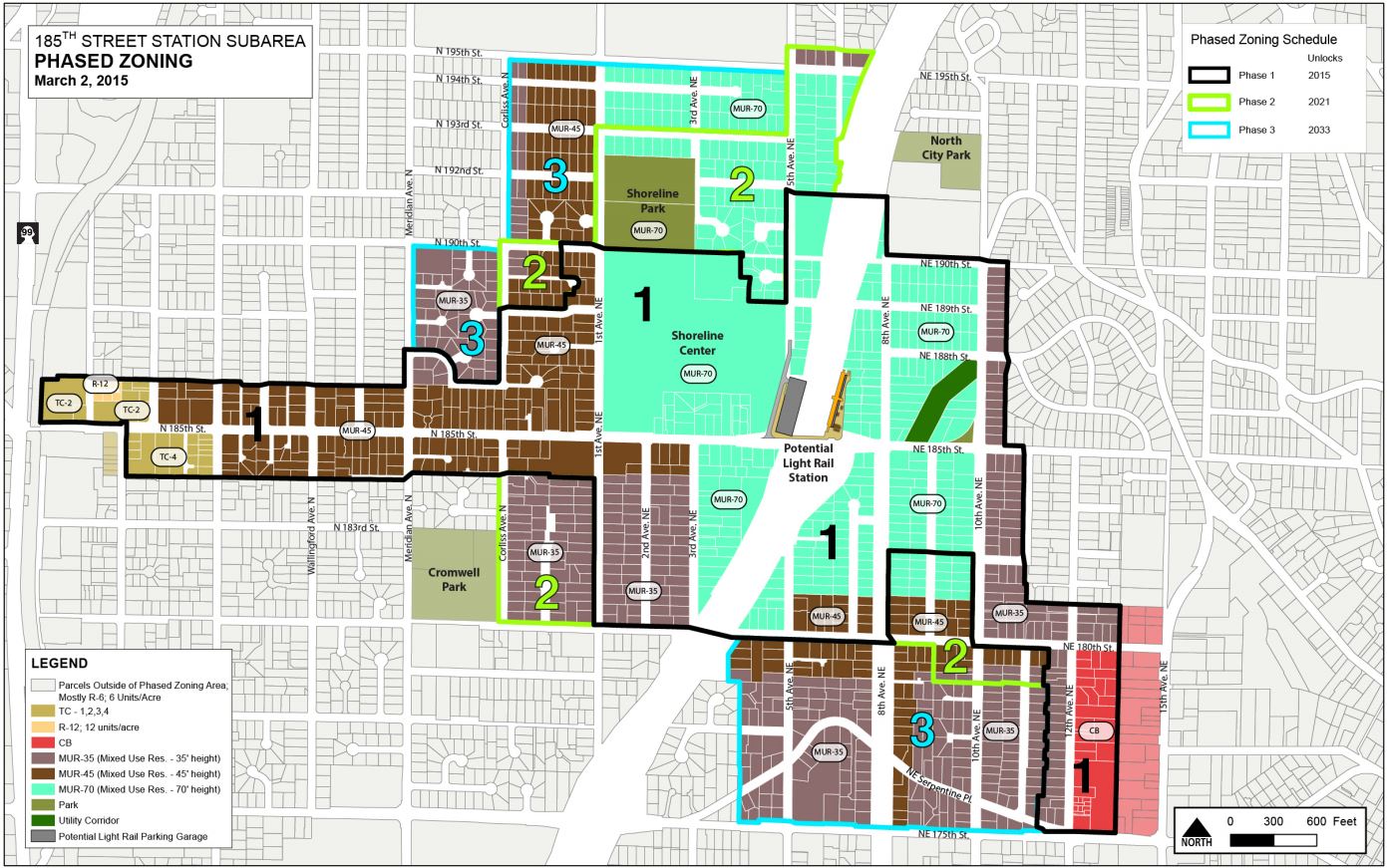 Last week, the Shoreline City Council met to approve a rezone in the area surrounding the future 185th Street Station, a light rail station on Sound Transit’s Lynnwood Link alignment. Previously, the City of Shoreline had explored an areawide rezone ranging in mixed-use zoning from 3 to 8 stories as well as a few commercial zones. However, the Planning Commission recommended a phased approach to zoning changes. The City Council agreed with a less aggressive rezoning effort and supported three phases of zoning changes beginning with the area closest to the future light rail station.

The Council took a different course of action from what we reported on a few weeks ago. The Council reduced the maximum zoning explored, adopted different zoning designations in some areas, and removed a few areas entirely from any current and future rezones. For instance, in the core area closest to the future light rail station, the maximum zoned height was reduced from 85 feet to 70 feet (8 and 7 stories, respectively). And while this means theoretical reduced building capacity and height, it may be a wash given that woodframe construction usually is cost prohibitive above 6 or 7 stories. Meanwhile, a block of properties located north of N 185th St between Stone Ave N and Ashworth Ave N saw a zoning boost from the previously proposed TC zoning to MUR-45.

The phasing of rezones also saw a variety of changes from the preferred alternative previously analyzed by the Council and City staff. While most of the areas to be rezoned have occurred under the Phase 1 rezoning by the Council’s actions, two subsequent phases will further unlock areas north and south of the core station area for rezoning between 2021 and 2033.

Councilmembers discussed the alternatives of the Draft Environmental Impact Statement for the 145th Street Station Subarea, but ultimately felt that they could not endorse a particular option for further study. This was in spite of two fairly complete proposals recommended by City staff and the Planning Commission known as the “Connected Corridors” and “Compact Communities” alternatives. Councilmembers feel that a corridor study for 145th Street should be completed first before progressing to a Final Environmental Impact Statement and final set of preferred zoning alternatives. Ultimately, the 145th Street Station Subarea rezone has been tabled until 2016 at which time the precise timeline and pickup point in the process will be determined.

If you’re interested in seeing the current zoning in effect, including the rezone, Shoreline has provided a handy interactive zoning map.