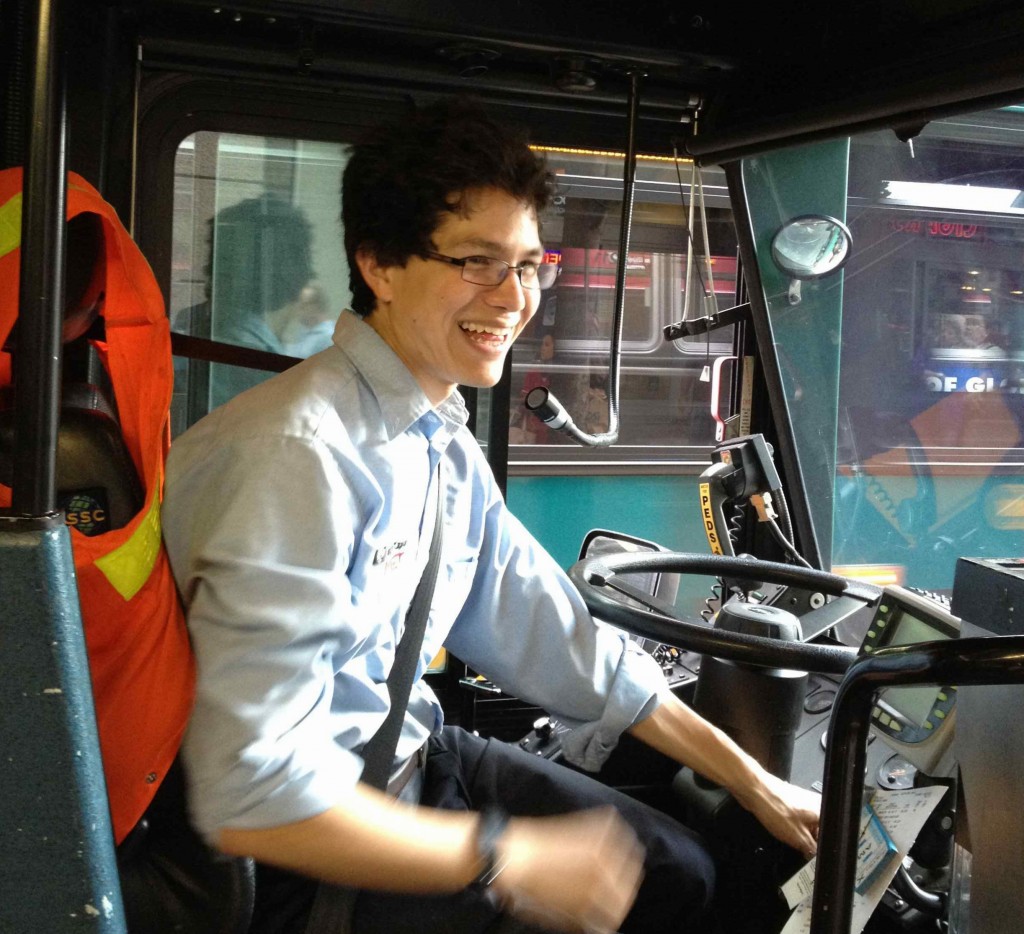 It’s an overwhelming whirlwind, bus driving. In thirty seconds you’ll have someone who loves you, someone who hates you, and somebody who wants to know how to get to Everett. The following list below happened in the space of an hour, over and after each other, a mental marathon of juggled headspaces and concerns. Each bus stop is another channel, another doorway, utterly separated from what came before.

-Rainier and Frontenac. A white drunk asks how to get to Georgetown, in between throwing around the n-word like Jefferson Davis was still in style. Boy, did he ever pick the wrong route to say that word on! Inwardly I wonder if I’d have it in me to intervene on his behalf if the brothers looking on felt compelled to express their frustration with him physically.

Eventually he asks to deboard between zones. “Right here?”
“Yeah, lemme get away from all these niggers.” We’re happy to oblige.
“You’re a nigger, faggot,” a woman tells him as he leaves, a comment in the running for least constructive statement of the month.

-“We need more like him,” I overhear from the middle of the bus. It’s a fan club of lovelies discussing me, four people who couldn’t look more different– remember those photos in math textbooks of students working together? There was always one Asian kid, one black kid, someone with a broken arm and somebody with glasses… my classmates and I could never take any of it seriously. Today I’m energized to see four variations of black, white, female, and male, in all manner of dress, enthusing over my attitude. One asks my name, and we holler introductions– he’s Darryl, but call him Mississippi.

-A middle-aged gent telling me about his two friends who grow marijuana, both of whom have degrees in relevant scientific and medical fields, and the various greenhouse methods, et cetera.

-As soon as the above fellow leaves, another takes up his post to chat. I’m reminded of a friend who once told me she often wanted to talk to me on my bus, but it always felt like she had to wait in line to do so! “I need to get off soon,” this man tells me. “I can only take so much fun at one time! I can only ride your bus for short distances!”

-Albert, a man whose brother recently passed, is moving to New York, where his only remaining family, a sister and niece, live. Today he’s passing time at the Bayview Street bus stop. “You’re coming back around?” he asks. “I’ll catch you on the other side!”
“We’ll talk more! See you soon!”

-A woman in fluorescent green inquires into her phone, “WHERE THE FUCK IS YOU AT?”
“Wow,” I say, “we don’t need to say stuff like that!”
She’s greatly flustered, and howls a mini-monologue into her phone about the exasperating nature of being unreliable; a friend has failed to meet her at one of the stops. I can sympathize with that. I’m reminded of a conversation I recently had with a friend where we shared our mutual feelings on much the same, praising the value of being on time, of being trustworthy. Her diatribe expresses nearly my exact sentiments, albeit in slightly different words!

-I honk the horn at Seneca to no avail– Richie Holly’s on the sidewalk, and he’s not paying attention. This is what red lights are for. I jump out and catch his attention, convincing him to ride for a stop. Instantly we’re deep in conversation– Kate Alkarni Gallery’s closure in Georgetown, the health benefits of walking, how he’s feeling healthier than he can remember, how I’m working on four life-sized portrait drawings. He’s uncontactable, but we see each other often enough on the street. Always a pleasure.

-Kyle Gulke appears out of nowhere. Diving into another headspace– he’s thinking of Italy for the summer, and I’m trying to convince him how great Florence is. Venice, Rome, yes, both terrific, but those art museums in Florence! I spent ten hours in the Uffizi. Now we’re discussing how many days you can see Florence in, and you also have things like Pisa in the surrounding territory… and he’s off the bus at Belmont, in a blink-and-you’ll-miss-it guest appearance. Out of Italy, back onto Pine Street.

-Broadway and Pine. Why does it sound like a tropical rainforest in here? “Hey, what are those bird noises?”
“Oh, that’s me,” an older woman up front pipes up. “They’re motion-sensing bird toys. I got ’em at the dollar store.”
She tells me the details. This way her grandsons can’t snoop around in her room. The birds will go off. I was going to ask whoever it was to turn down the birds, but I find all of this rather endearing. Not beeps, not alarms, but friendly chirping sounds. We let the nature soundtrack continue.

-Rory is often drunk, but he’s never angry. Crabbing season is about to start, he’s telling me. He’s getting his boat ready. But there’s a limit to how many crabs you can catch. His solution? Take a bunch of kids with you. Kids count as people for the purposes of catching crabs, and with each kid you have, you can get another six crabs. Brilliant. Why not just take more adults? They weigh too much. Kids are light, and they still count as crab-catching people. Details, details.

-A young man feels my enthusiasm as a bodily force. “Operator of the year, niggaaaa!” he roars with throaty joy, at once testosterone-filled and high on the concept of universal love, heady with genuine excitement. Another brother is looking on, and we’re all grinning wide, glowing together.

-You can get a lower back brace for about $100. So says our latest buddy, who does landscaping and masonry. He prefers masonry– less bending over. We talk about the hazards of repetitive manual labor, and the importance of core strength. He’s young, early twenties, and he wants to have a body that still works two, three, four decades from now. So do I.

And so on. I pull into the next zone, where a crowd is waiting…