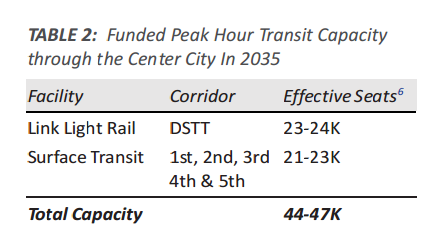 Sound Transit completed a comprehensive study (see PDF below for full details) in 2014 to forecast Downtown Seattle transit capacity over the next 20 years. The study, entitled Downtown Seattle Transit Capacity White Paper, forecasts a daily transit capacity shortfall of 5,000-8,000 trips in Downtown Seattle by 2035. This shortfall persists even after building the Center City Connector and a Ballard-to-West Seattle High Capacity Transit (HCT) line. The findings come at an important time for regional transit, just ahead of a potential 2016 ballot measure that could fund significant capital investments in transit projects. Overall, the study indicates an urgent need to expand downtown transit capacity.

The study summarizes the complicated forecasting by poignantly noting that Downtown surface transit is already at capacity.

In most cases, the capacity of a street is constrained by bus stop capacity, or the amount of curb space available for arriving buses. This King County Metro analysis, performed in anticipation of the end of the Ride Free Area and pay-on-entry boardings, reveals that stops on 2nd, 3rd and 4th Avenues at Pike Street are at or over capacity

Light rail ridership growth is expected to continue on the existing Central Link alignment while expansion north, south, and east will dramatically boost ridership in the core of the system even more rapidly over the coming decade. In order to accommodate this growth, it will be necessary to increase the frequency of trains in the Downtown Seattle Transit Tunnel (DSTT). Ultimately, this means pushing buses progressively out of the tunnel and onto city streets. In a system that is already over capacity, full buses will end up leaving people behind even more frequently. The overall estimate of 2035 capacity includes completion of the Center City Connector, building out the bicycle network, and improved Link headways.

Everyone knows that Seattle is experiencing remarkable growth. Sound Transit’s ridership models show an increase of over 30,000 trips from their previous 2011 research.

However, estimating trip demand is more complicated than simply estimating the number of transit users. As an example, the paper shows how transit demand from West Seattle could create uneven demand at various locations; more people would enter a northbound train in Downtown than would exit it. This is why Downtown transit demand is estimated to be very high:

After examining all conventional scenarios, the study indicates that there is a gap between demand and capacity of 5,000-8,000 trips. Additionally, this shortfall assumes that bus capacity can maintain its current level, an optimistic assumption. Any additional traffic in Downtown slows buses further, requiring them to wait longer at stops and ultimately reducing the number of bus trips through Downtown. It’s likely dedicated bus lanes won’t solve this issues as cross street and turning traffic will exacerbate the problem.

There are only a few solutions that can address this problem. The first option mentioned in the study is to reduce the number of lanes for private vehicles, add bus-only lanes, and add bus rapid transit (BRT). This would require two bus-only lanes in each direction on both 2nd Ave and 4th Ave so that buses could pass each other (similar to 3rd Ave). As a solution, it is the lowest cost alternative. But it does have a serious pitfall: growing traffic in and around Downtown would inevitably make these buses less reliable. The alternative to BRT is another grade-separated corridor through Downtown. This could be elevated rail, a new rail tunnel, or a new transit tunnel that serves buses and trains, but could later be converted to rail-only. The last option is very similar to the West Side Transit Tunnel (WSTT) proposal supported by Seattle Subway.

A New Downtown Tunnel: The WSTT

An additional downtown transit tunnel would be the most reliable option and likely the only solution that would meet the expected future transit demand. When first built, it would allow multi-modal transfers, but could be converted to rail-only if and when it becomes necessary. Transit through the tunnel would not be delayed by surface traffic, interfere with people walking or biking, and might even be more palatable to drivers who would otherwise see up to two more streets in Downtown Seattle converted to transit-only. Furthermore, if the transit tunnel is not built now and bus-only lanes are constructed instead, we will inevitably come to a point when those lanes will have to be disrupted in order to build more capacity. This would have deep repercussions on all users attempting to travel through Downtown.

Moving Forward: The Politics of ST3

This study comes at a critical time. Sound Transit is putting together the projects that will ultimately go on the ballot in 2016, which would expand and improve regional mobility. Downtown Seattle has the highest amount of transit use in the entire region and capacity is already at a breaking point. The success of Washington’s economic engine relies on excellent transit in Downtown Seattle. Due to long-range planning and construction timelines, we must fund projects now that Seattle needs by 2035. This study makes the most compelling argument seen yet for a new Downtown transit tunnel and against more at-grade transit.

Editor’s Note: Further clarification has been added to the opening sentence about what was assumed when forecasting the transit capacity shortfall.