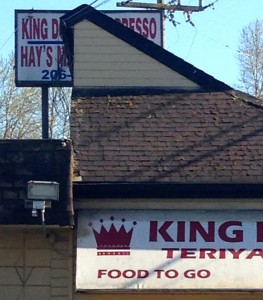 Metro stops 8080 and 8070 surround the northern and southern ends, respectively, of a lakeside bend of Rainier Avenue South. In the bend’s lee, does preside King Donuts Teriyaki Laundromat.

Through a quirk of bio-evolutionary history, when the lake was lowered nine feet by the Corps of Engineers, for what would become General Chittenden’s Locks, King Donuts Teriyaki Laundromat arose from the waters. Fully formed. Donuts. Teriyaki. And Laundry. All the people of Seattle by the sea rejoiced and continue to do so. Were such a story fictitious, we would have to make it up. King Donuts is the missing Seattle link because nothing – nothing – is or feels like it. I approach the coffee counter in awe.

‘Is that an old-fashioned?’

‘The one that looks like a bun thing? It’s got no glaze.’

‘I’ll take one. And a drip. Thanks.’ I’m happy with my choice; it’s good. I stand at the counter. Listening.

I ask Jimmy if he is the owner, the son of the owner, married into the business. I go through a handful of different ways to ask how he got there. Here. On that side of the counter. Jimmy assures me that he is not family, though I still do not really believe him. Everyone, I see so far, treats each other like extended. I am the only person that does not know my way around the counter, the laundromat, the tables in the dining room. They’re doing their best though to adopt.

‘May I plug in my phone, Jimmy? It’s about to go dead,’ appears one with stylish orange glasses. She looks at him and flashes a wide smile before returning to what I previously thought was a private dining room, but now know is the laundromat.

‘Sure,’ he tries to keep a smile down but his eyes completely give him away. He pulls apart a – before unnoticed behind the counter – cord octopus. He tries to attach one charging cord and then another. He is patient, but neither one quite works. On the third try, he lights upon the right tentacle for her phone. I hear the beep. Charging.

For the few minutes I’m there, a stream of people enters: for a donut, a cup of coffee, juice, milk. It’s never crowded or ever slack. Steady faces: parent and child, co-workers, a retired trawler crew, a suite of college kids washing laundry, middle- and high-schoolers snacking, and library goers from the Rainier Beach branch across the street. Just really everyone.

Jimmy tells me that he hates interviews. And he likes to up-cycle cleats and sneakers into robots. He shows me one that he has made with an X-Acto knife, hot glue, used soccer cleats, and his imagination. An arm’s length tall Optimus Prime double. Red. Black. Fierce. Playful. Squishy. Vinyl. He tells me that companies send their old shoes to him and then he returns them as robots.

I finish my donut and the last of my coffee. And head out refreshed to Stop 8080 to catch the Seven.