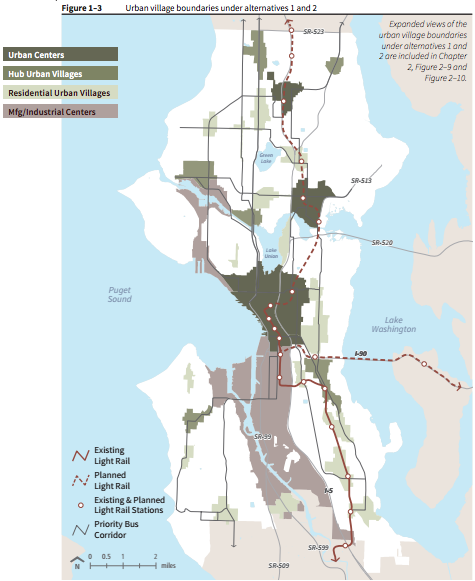 Yesterday, the City of Seattle issued the Draft Environmental Impact Statement (DEIS) for the city’s comprehensive plan update, known as Seattle 2035. The comprehensive plan update will guide how Seattle grows, and covers things like housing, land use, transportation, environment, utilities, capital facilities, parks, and neighborhoods. The 394-page DEIS is the first version of the comprehensive plan update to analyze four different alternatives for growth, their anticipated impacts, and potential options to accommodate each alternative. Specifically, Seattle 2035 spans a 20-year planning horizon and plans for 120,000 new residents and 115,000 new jobs. Each alternative considers these growth targets in their analysis.

In a statement, Seattle Mayor Ed Murray said that “Seattle’s new Comprehensive Plan will be our blueprint for a more walkable, livable community. Race and social justice must be a foundational value as we update our plan. In the coming years, we need to encourage healthy growth and prosperity for all our diverse communities.” Mirroring the heart of what the Mayor said and complementary initiatives of his administration, the DEIS sets out seven core objectives for Seattle’s future Comprehensive Plan:

Chapter 2.1 of the DEIS has some really big nuggets tucked away within it. Potential changes for zoning, comprehensive planning, and housing policies are recommended:

Rezone Criteria. Potentially eliminate land use policies that establish detailed and strict criteria about when it is appropriate to change zoning from a single-family designation. This is the only zoning category that is addressed this way in the Plan and is at a level of detail that is more appropriate for the Land Use Code.

Homeownership. Consider eliminating the goal of increasing home ownership over time as outdated and no longer applicable in Seattle.

Affordable Housing. Consider adding affordable housing as an appropriate use of City surplus land, along with some guidance for how to select among the various possible uses of surplus property. Potentially incorporate new policies that emerge from the City’s Housing Affordability and Livability Agenda.

Each of these may seem like brief and simple statements on potential changes, but they represent a huge shift. For instance, the proposal to simplify the Future Land Use Map (FLUM) designations in urban village designated areas could provide greater flexibility, certainty, and clarity. Currently, urban villages consist of designated boundaries on the FLUM, but underlying land use designations are still called out separately and generalized, which add a significant degree of ambiguity on how zoning should be implemented within the urban villages. It’s conceivable that the urban village districts can be better described at the subarea plan level or in policies as opposed to ambiguously indicated on the FLUM. Meanwhile, dropping the goal of homeownership is a strong statement that the city should be focused on all tenancy types regardless of whether a resident is a renter, social welfare or co-op tenant, or condo or fee simple property owner.

The Department of Planning and Development (DPD) is seeking public input on Seattle 2035. A 45-day public comment has been opened and will run until June 18, 2015. While all comments will be considered in Final Environmental Impact Statement, it is best to provide DPD with comprehensive comments covering issues you think are important for the Department to analyze and why one alternative–or combination of alternatives–is best. You can visit the online open house to explore the elements of the DEIS and take a quick online survey.

DPD will hold a public open house and hearing on May 27th from 6pm to 8pm at City Hall in the Bertha Knight Landes Room. Additionally, written comments can be sumbitted online, at 2035@seattle.gov, or mailed to DPD.