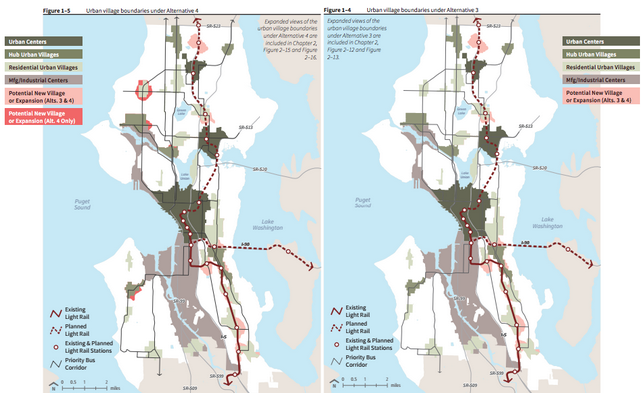 Seattle is growing fast. Over the next 20 years, 120,000 new residents will make Seattle their home, and employers will add 115,000 new jobs within city limits. In today’s terms, the Seattle of 2035 will have as many residents as Fort Worth, and it will be as dense as Long Beach.

Accommodating this level of growth requires serious planning, and the City of Seattle has spent the past two years doing just that.

In early May, the city offered up four different alternatives for growth. The first two largely mimic the city’s current pattern of growth while the second set of alternatives could change how the city focuses growth. In an earlier article, Stephen Fesler summarized these changes as follows:

The least surprising option is Alternative 1, which simply continues the city’s existing growth patterns. Under this alternative, 42% of household growth would be focused in urban centers, 35% in urban villages, and 23% in single-family neighborhoods. There would be no changes to urban center/village boundaries. Instead, growth would be sustained by infilling parcels of remaining developable or redevelopable land.

The city could implement strategies to increase building capacity within these areas through upzones or modifications to development regulations. Indeed, some urban villages still have excess land supply that is zoned for urban low-density residential. Those familiar with the city’s zoning maps would notice, for instance, that the Roosevelt Residential Urban Village is one such place with single-family-to-urban-zoning potential. These areas could be rezoned to support more growth, though this would likely involve lengthy planning processes.

Meanwhile, some urban villages, like Ballard, are approaching their total development capacity under today’s land use regulations. It’s likely that there isn’t enough remaining development potential in Ballard to meet the legal requirement to provide 20 years of capacity. Over the past 20 years, 3,516 new dwelling units have been built in Ballard, of which 2,836 net new dwelling units were built in the past 10 years alone. And development isn’t slowing down; dozens of new projects are currently being planned or constructed. If this level of growth continues, it won’t be long before there aren’t any parcels in Ballard left to develop.

To its credit, the city is engaging in a process to determine how the central area of Ballard can be designed to absorb more growth through the Ballard Urban Design Framework. But Ballard is just one of many urban villages that have seen rapid growth, and like Roosevelt, Ballard’s urban design framework will likely need to be revisited sooner rather than later if growth continues at its current pace.

On the face of it, Alternative 2 might seem like a great vision for the city. Urban centers have excellent access to jobs, high quality transit, city services, and shopping opportunities. Alternative 2 would concentrate growth in these well-connected areas, while relieving pressure on areas of the city at high risk for displacement, like Southeast and Northeast Seattle.

But there’s a catch. This level of concentrated growth would amplify the rate of change in the urban centers. As cheap, older buildings are cleared out to make way for new, expensive ones, it will become that much harder for anyone but the rich to afford to live in those areas. Lower-income households would be effectively shut out of the most vibrant and thriving parts of the city.

Additionally, despite fairly generous zoning in urban centers, there’s no guarantee that projects would come anywhere near the allowed limits. They certainly don’t today. It’s entirely possible that changes in the market could push developers to seek other types of development than high-rises. If this happens, development would essentially be unplanned.

South Lake Union is a clear demonstration of both of these problems. The neighborhood changed so quickly that it lost its low cost building, and yet many of the new projects didn’t maximize the neighborhood’s zoning capacity.

Alternatives 3 and 4 are more ambitious in their approaches to growth in the city. Underlying both alternatives is the thesis that high-quality transit, like light rail and/or bus rapid transit, are key to expanding access to urban benefits. Both alternatives would expand the boundaries of urban villages near light rail stations at Rainier Beach, Othello, Mount Baker, Beacon Hill, and Roosevelt, and would establish new urban villages centered on the future Judkins Park and N 130th St stations. Alternative 4 would additionally expand urban village boundaries in Crown Hill, Ballard, Fremont, and Alaska Junction. Under both alternatives, the city would take steps to implement zoning and regulatory changes to facilitate urban development.

Transit-oriented development is a fantastic way to extend the reach of urban benefits, but it is not a panacea. Both alternatives run the risk of severe displacement in Rainier Beach, Othello, Mount Baker, and Beacon Hill, as well as dozens of other locations in the city’s urban villages slated for future development and regulatory changes under these two alternatives. In fact, the city’s own analysis suggests that the potential for displacement is higher under the latter two alternatives. It would be unfair and inequitable to ask lower-income residents to bear the brunt of the city’s growth — and yet both alternatives essentially gloss over new and effective potential mitigations for this problem.

As our readers know, The Urbanist is not one to be boxed in.

The Urbanist’s editorial staff believe that all four of the provided alternatives would lead to an unacceptably high level of displacement and inequity. We cannot, in good conscience, endorse any of them. Instead, we are endorsing a fifth option, which we have creatively dubbed Alternative 5.

Growth can be a wonderful thing. Seattle is growing, and it behooves us to direct that growth in a way that will most benefit our residents, our city, and our planet. Yet growth also has costs, and we must not allow those costs to fall disproportionately on those who are least able to pay them. If we want to accommodate the next 20 years’ worth of growth without large-scale displacement or turning Northgate into a gated community, we must find a way to spread that growth — and the benefits of urbanism — to a wide swath of the city. High-density growth must be paired with high-quality transit, such that walkability and car-free living are no longer the sole privilege of those who live downtown.

Seattle deserves an equitable approach to growth, and we believe that Alternative 5 is that approach.

The comment period on the Draft Environmental Impact Statement for Seattle 2035 ends on Thursday, June 18. Please share your thoughts with the Seattle’s Department of Planning and Development (DPD) and let them know that you think The Urbanist Alternative 5 is the best approach to growth over the next 20 years. Brief comments are greatly appreciated by city officials, as are comments that make compelling and thorough arguments. You’re welcome to quote our four points above verbatim in your letter to DPD.

Take the survey and leave your detailed feedback for DPD staff.