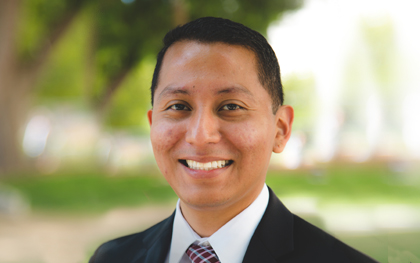 Abel Pacheco (aged 28) is one of the two youngest candidates running for Seattle City Council with hopes of capturing a position in the newly formed District 4. Pacheco originally grew up in California, but found himself in Seattle to pursue his educational aspirations in public administration at the Evans School of Public Affairs. He has very strong ties in District 4 having previously served on the Wallingford Community Council and the U-District Partnership (he still is an active member for both organizations). He now works in higher education as Assistant Director for External Affairs at the University of Washington and Adjunct Professor for North and Central Seattle Colleges.

Pacheco boasts a platform focused on housing, public safety, and innovative technology issues to improve our infrastructure like transit and broadband. As a person of color, he understands the challenges that people face when it comes to policing. He wants to improve partnerships to drive better outcomes. He also thinks that the key to success in government is harnessing technology. He wants to help the City find ways to implement technology so that departments become even more responsive, smarter, and reinvent how infrastructure is used. On housing, Pacheco can identify with those struggling to find affordable housing. Since moving to Seattle, he’s been a mother-in-law renter; he wants to find solutions so that more Seattleites can attain quality, affordable housing options.

Pacheco’s take on housing affordability is mostly centered on planning and transportation. He looks toward neighborhoods as an opportunity to support growth. Pacheco wants to work with them to meet their goals, but with a renewed spirit of charity by the City. He thinks that the City should put tools in front of them to help them determine what approaches to use. Pacheco mentioned changing zoning (including single-family areas where warranted), changing regulation around allowing accessory dwelling units, and modifying development regulations as examples of this. Pacheco also reflected on past planning efforts in neighborhoods as somewhat prefunctory; going forward, he wants a more collegial planning process that hears the desires of local resdients.

Pacheco placed an emphasis on people living where they work and supporting public transportation. He wants to focus on getting people to live closer to where they work, but also thinks that good transit goes hand-in-hand with new urban development. Going further, he suggested that new development is a much better fit when located in transit-rich areas. At the same time, the availability of high quality transit can get people to work and elsewhere very effectively.

Pacheco jumped right in and said that Seattle is leading the way on wage equity. He noted that a $15 per hour minimum represents a huge step forward. Increasing wage for low-income earners could really help them up, but only if the city can get housing affordability and transit right. He’s deeply concerned about current trend of rising costs for housing and transportation. Pacheco thinks these are still serious liabilities that need to be tackled by the City to ensure the success of the new minimum wage rules.

Pacheco is a big supporter of Vision Zero. “I think it’s a very noble goal and we should strive to achieve it,” he told us. He realizes how challenging life can be for vulnerable users like bicyclists and pedestrians on city streets. He shared a personal story to explain that point.

Pacheco, a resident of Wallingford, works in the University District. He once decided to ride his bike to work along 45th Street, but found it so unsafe and terrifying that he now walks most days and occasionally hops on the bus. He understands why people are frustrated with our infrastructure and thinks people shouldn’t have to make that choice.

Pacheco thinks that the new Move Seattle program will be a big leap forward in realizing the goals of Vision Zero. He says that the loss of “one life is one life too many.” He wants to play a big role in helping implement Vision Zero policies and programs, particularly for the neighborhoods of his district. Pacheco proposed a new lid on top of I-5 that he argued could be a positive project for his district and help make progress on Vision Zero–as well as with housing. Stretching from 43rd Street to 50th Street, the lid would heal a deep wound between Wallingford and the University District. Pedestrians and bicyclists would be able to traverse safer connections, particularly along a new path stitching 47th Street back together. Meanwhile, it could help the city realize housing, environmental, and park space goals. 14 acres of new park could be created while added tree canopy would contribute to positive environmental outcomes.

“Growth is coming and I want to make sure we do it in a way that is environmentally sustainable.” He used the Bullitt Center as an example of this. One of the reasons that the Bullitt Center was built, he said, was to challenge current building and land use codes. At the same time, it was constructed to show that it was possible to use the cleanest and most sustainable technologies in new buildings. He thinks that we can build sustainably and sufficiently to accommodate growth by funneling it in proximity to light rail stations.

When asked what 20-year growth alternative approach would be best align with his vision for Seattle, he identified Seattle 2035 Alternative 4 (the urban village, transit-oriented growth alternative) as a similar approach that he would favor. He reiterated that development must happen where transit is accessible.This can also help relieve the pressure of parking, or lack thereof, from neighborhoods. Part of his reasoning was that the old ways of auto-oriented growth aren’t the best long-term option. “Our streets aren’t going to get any wider”. Moving people on transit gives the city much higher and efficient throughput while helping to better maintain the city’s character that people value.

Pacheco said that his district would be home to the three new light rail stations over the coming decade. With this new piece of infrastructure in place, it will offer tremendous opportunity for his district and sustain growth in an equitable, sustainable fashion. Pacheco linked the district’s light rail investments to the future University District rezone. He supports the overall rezone and thinks that it will bolster the prominence of the neighborhood because it would increase housing.

He recognizes the concerns that residents and businesses have about the impacts resulting from investments in new development. Despite that, he thinks that there is a bigger struggle for many residents, often students, when it comes to housing choices. For them, it’s usually a choice of living further from campus or living three to a room closer to college. With more capacity for housing, and presumably the delivery of new units, current and future residents could take advantage of the new housing offerings closer to where they want to be.

Another point he raised was social equity elsewhere in his district. He sees the eastern portion of the district as transit-poor, particularly in Sand Point and Wedgwood. At the same time, prominent senior centers and social welfare organizations like Solid Ground operate in these areas. He thinks that the opening of light rail will offer a huge chance for the district to re-evaluate transit service patterns.

Read our interviews with other District 4 candidates, Rob Johnson and Michael Maddux.