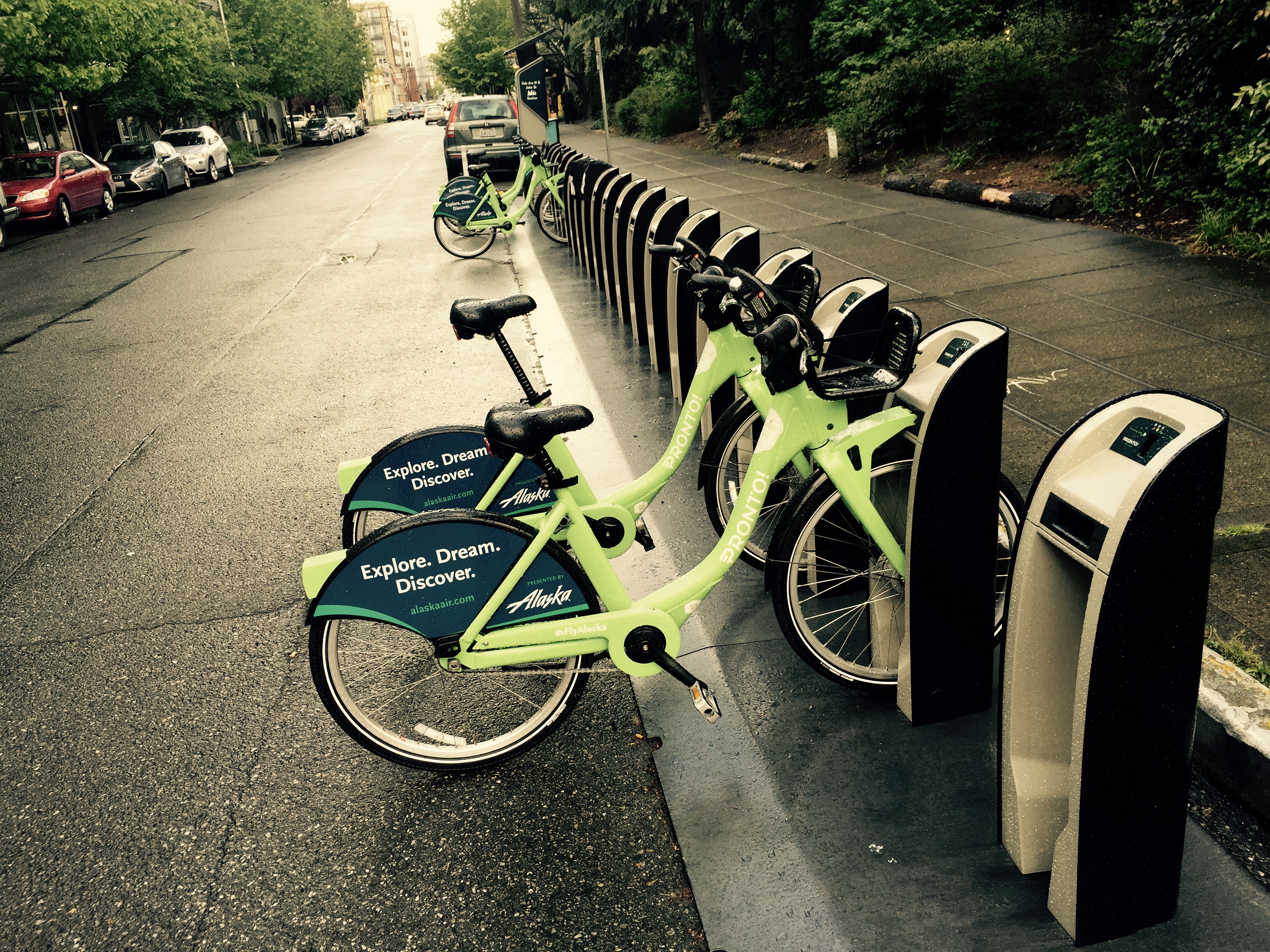 Happy birthday to Pronto! Boy does time fly. Seattle’s bike share turns one today and there’s a lot to celebrate. In Pronto’s first year, the bike share heralded the newly opened Downtown protected bike lanes, launched with 50 stations and 500 bikes across the city, collaborated with four organizations to deliver four new bike stations, came up with local squiggle routes to help riders out, introduced a low-income program with Bellwether Housing and Capitol Hill Housing, held dozena of membership and community events, and devised a unique solution for free bike helmets for riders.

With data from Pronto, I put together a map of (mostly) Pronto annual members in Seattle as well as graphs depicting age cohorts and gender.

Back in March, Pronto released data from the first six months of the infant bike share program. At the time, 36% of annual members identified as female. Today, that number remains unchanged with 1,212 women members, or 36% of the 3,299 annual members. Interestingly, about 1% (33 individuals) of annual members are categorized as “other” suggesting that there is a contingent of individuals who identify neither as female nor male. Men continue to dominate Pronto’s membership at an almost 2-to-1 rate (62%).

On first blush, Pronto annual members are not necessarily as youthful as you might suspect. The 31-to-40 age bracket makes up 44% of annual members while their next closest cohort are in the 21-to-30 age bracket with 31%. Middle aged members (41 to 60 years of age) roughly equate to their youthful counterparts at 28%. Those in their golden years constitute a very small sliver of the annual member total with 145 individuals (5%), but that’s still 3.5 times the number of minors registered to the program.

At least 344 annual members are not registered to an address in Seattle. This suggests that most of those likely live outside of the city, which represents as much as 10% of annual members. My guess is that these individuals either really believe in bike share and bought membership to largely support the program or hold a regular job in the Pronto service area. A few extra data points accidentally ended up in the map above, some of which is not abundantly evident at first glance — call them Easter eggs. As an example, six annual members appear in zipcodes out by Carnation and Duvall. Talk about dedicated members. The remainder of members outside of Seattle tend to be in adjacent cities like Shoreline, Burien, and Mercer Island.

If the numbers above aren’t enough for you, let’s run through some more for the first year:

Breaking those numbers down further, we find a mix of good and less-than-good numbers. For instance, the average bike station saw 512 customers purchase short-term passes and the network generated 935 miles of bike riding daily. Meanwhile, 144,000 trips were made on Pronto bikes throughout the year, but if you parcel that out on a per bike per month basis, that comes down to 24 trips. In context though, that’s within a range closely mimicking peer systems in Denver and San Francisco.

Additionally, that first data point in the list above suggests that the bike share system is meeting a key target — the 30-minute target. With average trip time at 19.05 minutes, most users are not exceeding the 30-minute threshold at which additional charges kick in for each half-hourly block. Bike share is predicated upon the concept of rotating bikes throughout the system as quickly and as balanced as possible. This helps realize a primary goal of ensuring that bikes remain accessible to users at most locations in the system and on demand.

Going forward, there is a lot that could change with Pronto. Mayor Ed Murray is committed to expanding the bike share program. One key expansion is set for the Central District, which is partially motivated out of social equity, but also is also a logical area for expansion. Wider plans call for the addition of electric bikes to the fleet, the deployment of 2,500 bikes and 250 bike stations, expansion to most corners of the city, and possible absorption of Pronto into city government.

If you want to celebrate Pronto’s first birthday, join the bike share crew in Downtown and Capitol Hill today for some free gifts from Chipotle at the times and bike stations listed below. Don’t forget to bring your membership key with you!

*Most numbers are derived from data provided from Pronto during the time period of October 13, 2014 to October 6, 2015.