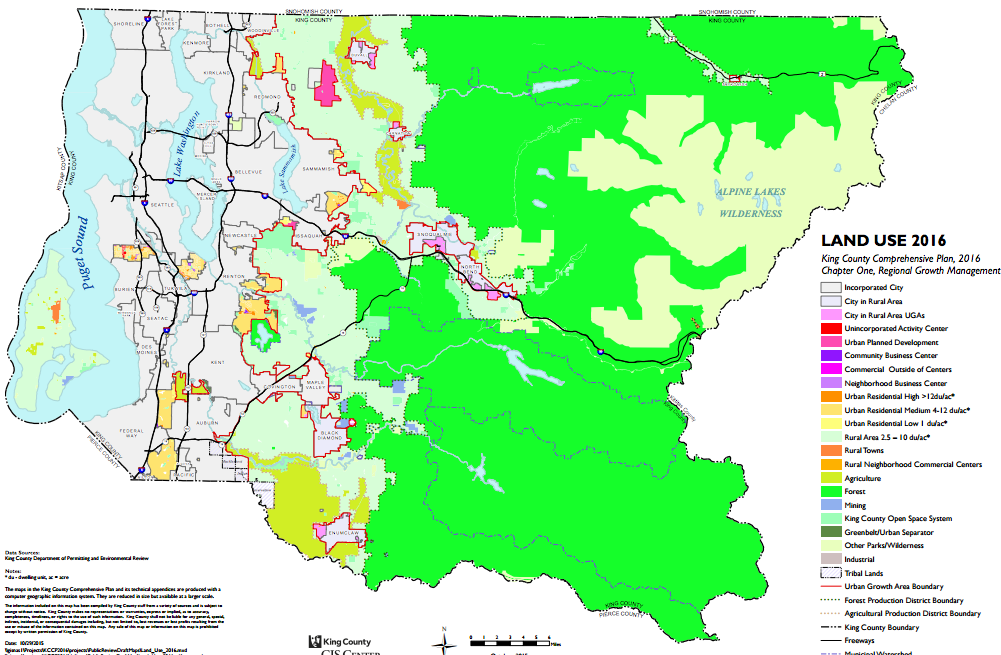 Cities and counties throughout the region have been pushing to complete their comprehensive plan updates for the 2035 plan period, a 20-year planning horizon. Typically, a major plan update happens every eight years1, but King County is unique in that a major update happens ever four years. Planners for the County are proposing substantial changes to the Comprehensive Plan, but many will be pleased to hear that their draft proposal includes no expansions to established Urban Growth Areas2 (UGAs).

Still, the County did receive 16 docket proposals from the public to amend the Comprehensive Plan. Six of those proposals are directly related to modifications of UGA policies with four of them actively requesting expansion of UGAs.

Docket Number 5 is a unique proposal regarding changing the UGA boundaries near the Renton Highlands. The proponents make two separate but related requests. Their seek to either:

Planners note in their review of the proposal that contraction of the UGA would not serve established countywide growth management policies. Therefore, they recommend that the proposal be rejected.

Docket Number 7 is a proposal to expand the UGA for a pocket of parcels between I-90 and the City of Snoqualmie. The properties are currently zoned as RA-5, a low density rural residential zone, and have a commensurate land use designation of Rural Area. Land to north of the properties form the burgeoning Snoqualmie Ridge community, an area that is dominated by single-family residential developments. Limited strip commercial and services can also be found within the community. Properties to the west of the proposed redesignation area are largely undeveloped while properties to the east are best characterized as large lot residential. Planners have recommended rejection of the proposal to expand the UGA based upon established countywide planning policies.

Docket Number 8 is a proposal to expand the UGA for a pocket of 20 parcels located between urban areas of eastern Sammamish. The proponents have requested the inclusion of the parcels into the UGA so that they could be annexed to the City of Sammamish and developed at urban densities. Surrounding areas have been developed primarily for low density single-family residential uses. However, the planners have recommended that the proposal be rejected.

Docket Number 11 is a proposal to include 15 parcels within the UGA along the eastern border of Redmond. All parcels in the proposal are presently zoned as RA-5 and have limited residential development. Citing countywide planning policies and the excess of developable land within the UGA, the planners have recommended that the proposal be rejected.

Docket Number 13 is a proposal to take protected agricultural land out of farming use and place it within the UGA for future urban development and annexation to the City of Woodinville. The parcel of land is immediately adjacent to the city limits and best characterized as a working commercial farm. Properties to the north and west have been fully developed with urban residential uses. Again, planners cite an abundance of urban development capacity within the existing UGA and countywide planning policies for recommending rejection of the proposal.

Also worth noting is Docket Number 16, which is a proposal to change County policy on extension of public sewer service to rural unincorporated areas adjacent to UGAs. The proponent notes that extending public sewer systems to such area would reduce wastewater runoff to fertile farming areas and allow additional business. On the face of it, these sound like worthy objectives, but the Growth Management Act actively prohibits the extension of sewer service to unincorporated rural areas on the basis that it is an urban service. Once sewer service is extended, it’s hard to deny requests for higher intensity land uses and urban development. For these reasons, planners have recommended that the policy proposal be rejected.

…The boundary is not a relief valve to be opened when the going gets tough. Rather, it’s there to preserve permanently the region’s vital diversity of land uses, habitat and rural economic activity.

This urban-rural mix is one reason the Puget Sound remains a beautiful, livable place. It provides a variety of lifestyle options….

What’s dwindling is easily developable property in the most desirable areas. Easy pickings are gone — subdividable tracts in Sammamish are as scarce as vacant lots in Ballard.

That’s not a crisis — that has been the plan all along. The landmark 1990 Growth Management Act funnels most growth into urban areas while preserving precious natural spaces….

These are important points. King County not only has sufficient capacity for development within UGAs, but every ability to increase development capacity over the current plan period and future ones as well. We don’t have to make a choice between our quality of life and our natural environment. We already have the tools in place to enhance both, and that’s through maintining the urban line and building better communities within.

If you wish to comment on the docket proposals or the Comprehensive Plan update, contact the project manager, Ivan Miller, and the King County Council.