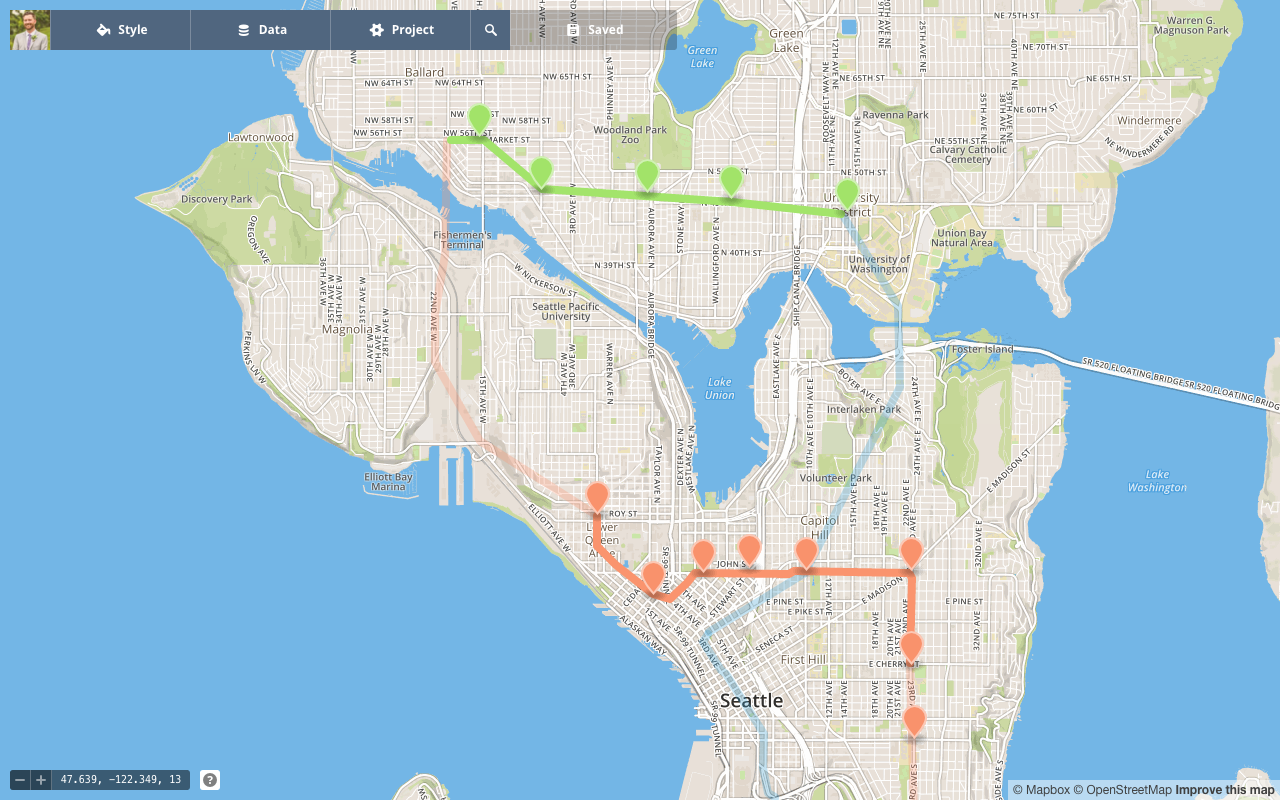 Reading the tea leaves of the Sound Transit Board, serving Ballard is a clear priority for Sound Transit 3 (ST3). But the Board evidently favors a Ballard-Downtown line via Interbay (I’ll just refer to this as Interbay henceforth for brevity). Ballard-University District (Ballard Spur) light rail might offer greater benefits and also leave enough money for the Metro 8 Subway. In combination, the Ballard Spur and the Metro 8 Subway will serve Seattle better than the Interbay line on its own.

I made the case for building a Lake Union Loop by completing the Ballard Spur, the Metro 8 Subway, and Ballard-Downtown (via Interbay) light rail. Building those three lines might be too expensive for ST3, especially if the scope isn’t increased beyond 15 or 20 years. Even if we did have enough money, we’d still have to determine the order in which to build the lines. I’d argue the Ballard Spur and the Metro 8 Subway should be first because they are more beneficial than Interbay light rail alone.

The latest study indicates that the elevated Interbay option with a new movable ship canal bridge would cost between $4.4 billion and $4.7 billion while the tunnel option would cost between $5 billion and $5.3 billion. Either option would operate best with a new Downtown transit tunnel, which would add another estimated $2 billion to the total project cost. Meanwhile, Sound Transit has pegged the Ballard-University District line around $3 billion. As an added bonus, this line would also connect Ballard and the University District to neighborhoods in between.

Sound Transit’s modeling predicts that the travel time from Ballard to Westlake Station will take approximately 18 minutes for an elevated line, or 19 minutes for an underground line. The Ballard Spur will be competitive with those times, even with the transfer to the Link spine. Here’s why:

Thus, at peak, the Ballard Spur could average faster times to downtown at 17 minutes. Off peak, the average travel times will only be marginally slower than Interbay.

Note that the Downtown-Ballard trip might be slightly slower since the Ballard Spur is expected to have a peak headway of 6 minutes and therefore a 3-minute average transfer penalty at peak. On the other hand, operators could hold the Spur train for incoming Link spine trains to optimize connections.

To avoid the transfer penalty for Ballard trips, the Ballard-University District line could also just continue south to downtown Seattle, sharing track with Link spine trains. Theoretically, this would allow Ballard to Westlake Center time of 16 minutes, the fastest of all options. Sound Transit doesn’t seem to keen on this idea, apparently citing rail congestion and concerns about station design. However, plenty of systems operate at higher frequencies than every 3 minutes without issue. It may not be necessary if the transfers are efficient enough, but through-routing the Spur would seem to be the gold standard on travel time from Ballard to Downtown.

One of the biggest things the Interbay alignment brings to the table is a station in Uptown and either Belltown or South Lake Union (perhaps both with a somewhat squiggly alignment). The Metro 8 Subway could do the same thing for less money. The most important stretch connecting Uptown to Madison Street would be about 3 miles. It takes another 0.8 miles to reach Cherry Street and 23rd Avenue closer to the heart of the Central District. Since the length is about the same as the Ballard Spur, the cost should be similar.

However, since I’m gunning for at least 6 stations (two more than in the Ballard Spur study), the price would rise. Underground stations cost an average of $175 million for the University Link project. Sound Transit seems to be estimating higher costs in ST3 studies; although, this may be a function of their over-designed stations with oversized mezzanines. So, let’s add about $400 million to the cost for two more hopefully modestly-designed stations. Thus, it would seem a $3 billion Ballard Spur and a $3.5 billion Metro 8 Subway would still cost about the same as a Ballard-Downtown line with a new transit tunnel.

Given how much these two short lines would improve mobility in Seattle’s densest neighborhoods, it seems a more judicious use of funds than building an Interbay-routed light rail line alone. The Metro 8 Subway hasn’t been officially studied, so it seems that Sound Transit doubts its significance; the regional significance, however, is clear to me.

This potential subway line would connect South Lake Union, a major employment center in Seattle, with the dense residential neighborhood of Belltown and the residential/cultural area centered around Uptown and The Seattle Center. A station near Madison Street and 23rd Ave E would also allow for connections to/from the planned Madison Bus Rapid Transit (BRT) line and provide high-quality transit service to the underserved Central District and portions of the east slope of Capitol Hill. Adding a station in the Cherry Street area would link the Central District even better, improving Sound Transit’s equity credentials.

The Metro 8 Subway would be a massive transit service upgrade. The Denny corridor is one of the most congested in the city due to interactions with busy I-5 and SR-99 on-ramps. Sometimes taking the King County Metro Route 8 bus is effectively no better than walking. From Capitol Hill to Uptown, the bus is scheduled to take 29 minutes at peak; often it takes even longer. Meanwhile, Google Maps says walking those 2.3 miles takes 47 minutes. A subway could travel that distance in about 8 minutes and be impervious to weather conditions.

Building the Metro 8 Subway would set the stage for the Ballard-Downtown line since it would take care of one mile of tunnel work and two underground stations. I’d wager that would shave almost a billion dollars off the price tag if Sound Transit was to build the Interbay route later on. Building the Ballard station of the Ballard Spur would also knock off the cost of another underground station ($200 million give or take) on the Interbay light rail budget.

These alternatives, as presented here, provide an intriguing alternative to the current Interbay plans for approximately the same amount of financial investment. Furthermore, the Ballard Spur and the Metro 8 Subway would connect more diverse, transit dependent neighborhoods, remove a lot of inefficiencies present today, and create a more dynamic transit network.