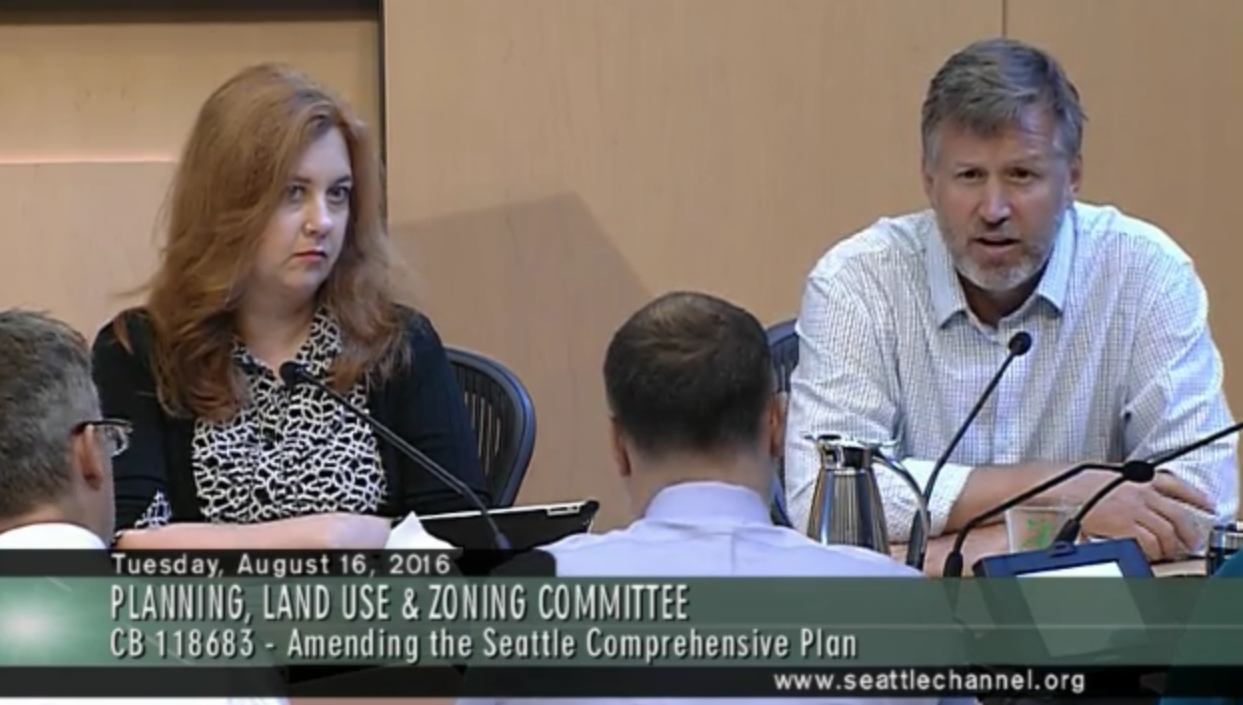 Yesterday, I highlighted the Comprehensive Plan amendment proposals that the Seattle City Council is wading through for the major update known as Seattle 2035. Amendments would touch every chapter of the Seattle 2035 plan. The Planning, Land Use, and Zoning (PLUZ) Committee met yesterday to discuss 13 high level policy amendments, setting aside discussion on the other 100+ technical amendments. Three councilmembers were in attendance for the meeting, including Committee Chair Rob Johnson and Councilmembers Lisa Herbold and Mike O’Brien. Summarizing the key policy decisions in an e-mail to The Urbanist, Amy Gore, a Legislative Aid to Councilmember Rob Johnson, said that the councilmembers offered the following direction to Council Central Staff:

Policy 1 – Support for creating a new Community Engagement Element, with a desire to make crystal clear that the goals and policies should be applied across elements and issues.

Policy 17 – Believe that if we move forward with an amendment about growth or land use approaches in transit corridors, that it will require more specificity.

Policy 36 – Support removing provisional boundary expansions until more work has been done through the HALA engagement process and considered next year when we have a final proposal.

Policy 36 – Support waiting on “shading” urban villages until next year for the same reason above.

Policy 37 – Support for retaining existing policies regarding industrial lands until the completion of the Industrial Lands Task Force recommendations (2017).

Policy 52 – Agreed that definitions of transit service (“frequent”, “very good”) should be more specific and consistently applied throughout the plan.

Policy 73 – Support for making growth goals in land use and housing consistent.

Metrics and goals for parks and open space:

Another topic not originally in the amendment packet:

Policy X – CM Herbold mentioned that she had some other policies related to drainage and flooding issues that she would like the committee to consider.

The councilmembers also weighed in on the topic of amending urban village growth rates. The discussion was very robust on the matter of how growth estimates are developed regionally and how they are apportioned throughout the city urban village by urban village. The Seattle 2035 plan would apportion estimated growth rates to urban village types as the table above indicates. Two amendment proposals could revise the future growth rates upward or downward for urban villages depending upon whether an urban village is determined to have high access to opportunity (i.e., jobs and services) and characteristics of low or high risk of displacement, as defined by the Growth and Equity Analysis. Council Central Staff will explore the issue for further.

The PLUZ Committee will meet again to discuss the major Comprehensive Plan update on September 9th with a follow-up hearing on September 15th.