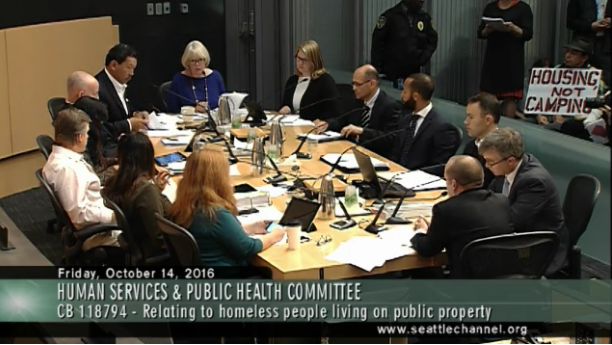 Seattle, we have a problem. A few dozen or so of our housed neighbors –claiming to represent “thousands” of Seattleites–showed up to the City Council Human Services Committee meeting Friday. “Housing is not a right,” a fair amount espoused. We could replace the phrase “the homeless” with “Muslims” in many of the statements made by these folks, and it would have basically been repeating Donald Trump (albeit slightly more coherently).

The rallying cry this time around: We don’t want the homeless camping in any parks! Fanning the flames: Seattle’s current administration sending out a map outlining where encampments could not be swept, in their opinion, under one of the current proposals to end inhumane sweeps before Council. The problem: the administration 100% misinformed and stoked fears in the public, and used the media to make it worse. All of that hatred of our neighbors experiencing homelessness falls at the feet of the 7th Floor. Congrats.

Of course, the legislation in question doesn’t actually open up all parks and public spaces to camping. Rather, as amended, it would direct the administration and the various department heads to promulgate rules to determine where there are “acceptable” and “unacceptable” places for people living in tents to exist. The only way that would include parks or park-adjacent locations would be if the administration identified those as “acceptable” places. I imagine that would be highly unlikely–especially given the clear statement from the Mayor that “we can’t have people in our parks, we can’t have people on our sidewalks.” (and by “people,” referring to unsheltered people living in tents).

(Separately–I’m not convinced that non-active use park spaces are in any way ideal for encampments, anyway. Often that means far from services, transit, etc. I think there are places that are better options for this short-term, band-aid measure)

During public comment, there were a fair amount of folks calling for a “real solution” to homelessness. Some even cited to the Pathways Home Initiative–which is going to do some great things. The Mayor should be applauded for this and the Navigation Center that he has been pushing through. But, as Xochitl Mayokovich pointed out during testimony, implementation and capital investment in all of these measures takes time. The Navigation Center is looking at a January opening (and will have 75 beds). Pathways Home is looking at a two year period before full implementation if done right. People without shelter need somewhere safe to sleep in the interim.

But let’s get back to the end game. Personally, I have had lengthy conversations around encampments with Councilmembers Burgess and Bagshaw. Councilmember Johnson and I had a lot of conversations around homelessness throughout 2015. Hell, I’ve even had solid talks with Mayor Murray about human services and addressing homelessness from a policy perspective. I actually find we are in agreement on a lot of pieces of the overall puzzle. While I am appalled at some of the media tactics we have seen around this policy, I know that all of the players care deeply about this crisis, and want to see folks in housing, not in tents. Impugning the character of our elected officials misses this fact.

To me, the end game must be getting people into permanent, affordable housing, and with the wrap-around services needed for those who need extra support. I hate the encampment fight because it has led to our City Council having to spend time on this legislation, and bringing up the hatred and vitriol from some members of our city against those experiencing homelessness. As we move forward with Pathways Home, we must end the process of “you can’t be here,” and instead have a “you can’t be here, but you can be there” approach to unsanctioned encampments. And when we have real housing options, whether through vouchers, permanent supportive housing, etc., work to rapidly support helping people transition from tent to roof.

Because as Councilmember O’Brien has stated again and again–people are not homeless by choice. There are many factors that are roots for the causes of homelessness that we are addressing in Seattle, from the minimum wage to worker rights that protect those most vulnerable of slipping into homelessness to our affordable housing levy and linkage fees on developers. We are working to end exclusionary zoning practices that drive up the cost of housing, and displace residents as their rents rise due to a lack of adequate housing stock and housing types. We also can’t solve all of these issues alone. We are not an island, after all. The Federal and State governments have a lot of work to do.

But none of the changes we need on any front are happening overnight. I am glad that the Mayor has moved forward with a proposal to adopt much of the ACLU bill into how we conduct sweeps. And I hope that we can move forward with the real, long-term solutions. Because one thing I do believe–having to sleep in a tent is unacceptable, and reflects a failure of us as a society. But until we have realistic housing options, until those are built and the procedures are in place, people need a safe place to sleep, to eat, to shit, and to exist. Because, despite what some folks during public comment said, we all do have a right to exist. 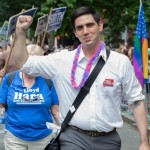