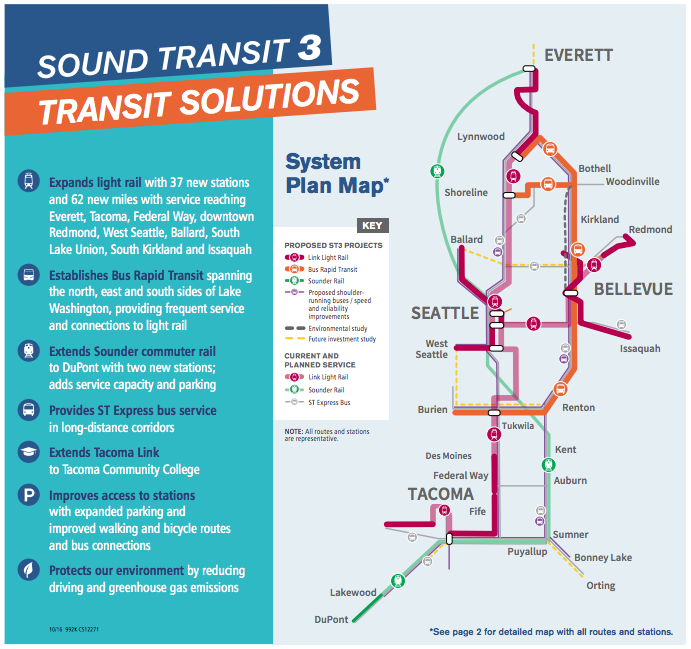 We’ve talked about Sound Transit 3 ad nauseam over the past two years, often until we were blue in the face. We’ve written about how ST3 could unlock transit-oriented development on SR-522, better serve Belltown, and act as a prime asset in our regional transportation network. We’ve also explained why foes are often wrong in their opposition. The reason, of course, is that crafting and voting on a regional transit expansion measure is a deeply important decision. If approved, it will set the Puget Sound on a very particular trajectory affecting nearly every future land use and transportation aspect throughout King, Snohomish, and Pierce counties for decades to come.

Many of our loyal readers will be familiar with these deep dives and think pieces, and perhaps take them into account when filling out their ballots. But the lion’s share of the electorate will be relying upon what they hear from friends and family about the measure. Others may be swayed from the soundbites that they get from other media. Sound Transit, though, has jumped in to provide concrete information sending households throughout the regional transit authority taxing district a six-page voter’s pamphlet that offers an honest analysis of what’s in the package, why it matters, and how Sound Transit operates.

Snippets on what’s in the expansion plan:

Kent/Des Moines to Tacoma: stations at South 272nd, Federal Way Transit Center, South Federal Way and Fife (all with parking) as well as East Tacoma and the Tacoma Dome

Cost: The estimated cost to implement the ST3 Plan is $53.8 billion in year-of-expenditure dollars of which new local taxes account for $27.7 billion. This cost includes all construction, operations, maintenance, reserves and debt service from 2017 through the completion of the system in 2041.

Improved transit capacity and reliability helps employers to attract and retain a broader base of workers and to have better access to goods and services. Increased transit use removes auto trips from roadways preserving capacity for personal, business and freight travel.

Sound Transit also has an extensive online repository of ST3 project documents that speak to the System Plan and appendices1 in greater depth.

I would be remiss if I did not mention the position of The Urbanist on ST3. Our Elections Board enthusiastically endorsed the measure because it would deliver grade-separated light rail to many parts of Seattle, enable transit-oriented development and urban development throughout the region, create a more resilient transportation system, and offer a very good value for the amount of local investment promised by it. If you’re still on the fence, take time to learn about the proposal, but ultimately, we hope that you too will find yourself in support.