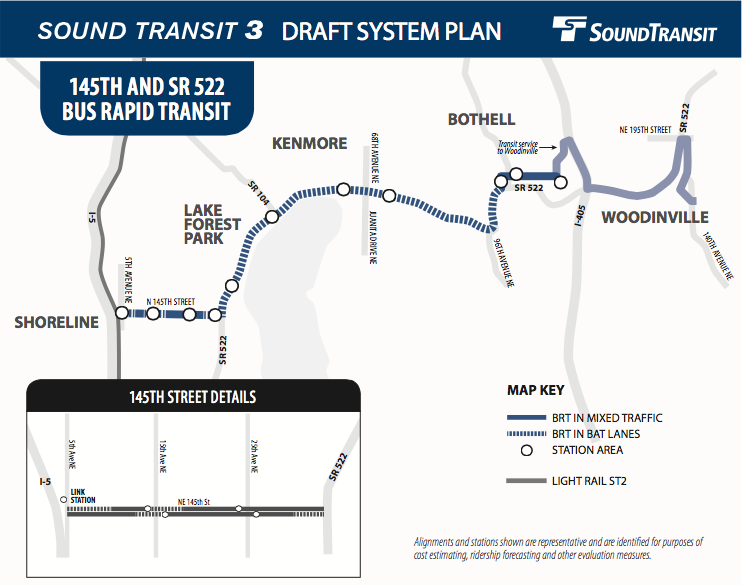 Sound Transit has finalized its Sound Transit 3 (ST3) package outlining the next 25 years worth of high-capacity transit investments. Most of the lines have been pretty well discussed, but one that is less so is SR-522 bus rapid transit (BRT). For a relatively paltry $387,000,000 or so, Sound Transit expects 8,000 to 9,000 daily riders by 2040. SR-522 BRT is a promising project and could look even better if the corridor grows faster than Sound Transit expects it to.

The plan calls for a route starting from the 145th Street Link station on the border of Shoreline and Seattle and following the border via 145th Street (SR-523) with stations at 15th Avenue NE and 25th Avenue NE and then turn northeastward on SR-522 just north of Lake City. Along 145th Street, the line would have queue jumps. On SR-522, it would have BAT lines throughout. The BRT line passes by Lake Forest Park Town Center, Kenmore’s central business district, and Bothell’s city center before terminating at University of Washington Bothell.

The development trajectory of SR-522 BRT seems to be underestimated. Sound Transit study pegged the corridor’s 2014 population at 23,800 and projected to reach 29,700 by 2040, meaning a population increase of only 5,900. By my estimation the corridor is already halfway there based on what’s been built since 2014 and what’s in the works. The corridor is already seeing what constitutes an apartment boom, particularly for suburban standards. Shoreline, Kenmore, and Bothell are growing pretty steadily, and, with the promise of truer BRT service, it could be an even hotter market for transit-oriented development with plenty of good sites. Meanwhile, Sound Transit expects employment in the corridor to jump from 7,700 to 12,300 jobs.

Living On The Edge In Seattle

One thing SR-522 BRT doesn’t do is hit the heart of Lake City, but the neighborhood’s northern edge will be within the walkshed and the immediate neighborhood has significant development potential in its own right. With the upcoming rezone of the Lake City Urban Hub, the neighborhood could see even more. Development is already climbing up the SR-522 corridor close to the future station near 145th Street and SR-522.

Within a few blocks of the future station, a seven-story building with 160 apartments is planned at 13730 Lake City Way NE. To the west, a six-story apartment building with 56 units is in the hopper for 12337 32nd Ave NE. To the south in central Lake City, more than 630 units are in development.

Meanwhile, 15th Avenue NE just below 145th Street is also zoned for growth (although it currently is suffering from a rash of one-story chain drive through fast food with the usual suspects.) One developer is the early stages of building a 65-unit apartment building its tentatively calling Jackson Square at 14349 15th Ave NE. Currently a 88-unit parking structure is planned so hopefully the design review board talks them down in light of impending transit upgrades.

Shoreline isn’t really thought of as a growth center but the city is making serious moves in that direction with the arrival of light rail by 2023. Already projects are trickling in. The city got a foretaste of what’s to come with Malmo building that opened in 2015 with 129 units near the RapidRide E stop at 152nd Street. The Shoreline Planning Commission recommend heartily increasing housing capacity near the future 15th Avenue BRT stop and possibly attracting similar projects.

Lake Forest Park doesn’t appear to have gotten as far along the urban re-design process as Shoreline, but then since it’s to the east, it won’t have direct access to light rail. SR-522 has a car-dominated development pattern but already that is changing with apartment buildings sprouting up more often and Lake Forest Park is trying to get in on that. A few things appear to be in the works in Lake Forest Park: a 16-unit condo building here and a 35-unit apartment there. But Lake Forest Park is relatively quiet on that front, although that could change with a more extensive zoning change. No zoning changes seem to be imminent near the “Town Center” a mall along the highway which will get Lake Forest Park’s other BRT station and a 300-car park and ride. One can hope a new station area plan is to follow with the TOD goodies.

Kenmore’s BRT stop at 65th Avenue NE should see plenty of TOD and already is seeing it without upgraded bus service. In 2015, Spencer 68 opened adding 138 apartments a blocks north of SR-522. The vast majority of Kenmore that is zoned for commercial and multifamily residential is near the SR-522 corridor. The less dense single-family zones are farther afield. This dynamic and the city’s stated desire to maintain the sanctity of single-family means most of Kenmore’s growth will be funneled near the future BRT line.

The Bothell building boom was the subject of a Puget Sound Business Journal update last week. Marc Stiles wrote, “Apartment development in Bothell has been booming. From 2013-15, more than 750 new units were added citywide, and another 600 are scheduled to open between now and 2018, according to Dupre + Scott Apartment Advisors of Seattle. City officials said most of this development is downtown.” The University of Washington Bothell is also booming: “Over about the last five years, UW Bothell’s full-time student population has increased 71 percent to 4,932, while Cascadia’s jumped 27.5 percent to 2,666,” Stiles reported. The two schools’ shared campus makes for a solid anchor for the BRT line’s northeastern terminus.

Stiles suggested Bothell’s McMenamin’s hotel that opened in 2015 catalyzed the building blitz, and he’s probably right there. What beer-guzzling Cascadian doesn’t like a McMenamin’s?

From Fledgling To Flying

Growth, though fledgling, is building along the corridor and the promise of BRT-like improvements connecting the area to the light rail spine could really get the momentum going. Sound Transit’s transit plan looks pretty solid; though, transit advocates will be on the look out for tell tale signs of BRT creep. On the land use front, urbanists should push the cities along the line to support the stations with strong access plans and zoning and land use policies to support strong transit-oriented development. If growth exceeds Sound Transit’s prediction—and it’s certainly looking like it will—it’s quite possible ridership will too. The Bothell Way corridor is as car-oriented as the highway that bears its name. But it doesn’t have to be that way.