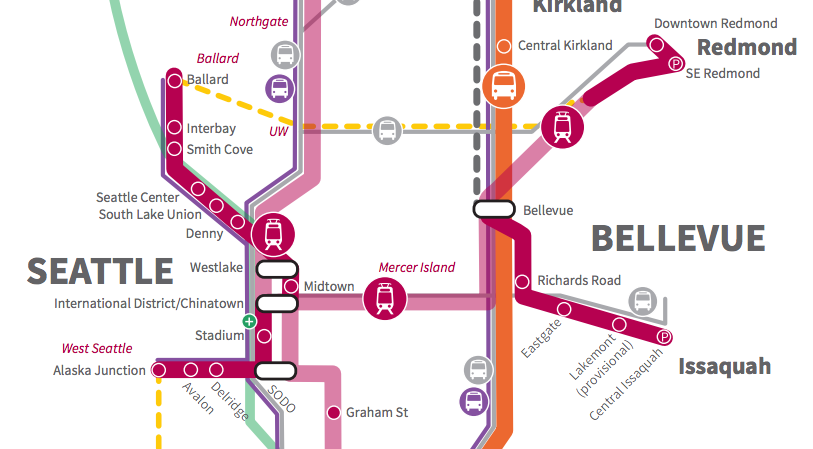 Commuters in Seattle’s suburbs should like what they see in the Sound Transit 3 Draft Plan that the Sound Transit Executive Board unveiled on Thursday. Seattle urbanists are left wondering what they get out of the ambitious but suburban-focused 25-year $50 billion plan to bring Sound Transit’s total to 108 miles of rail, a length that would rival BART in San Francisco. Sound Transit officials estimate that $27 billion would come from regional taxes and $23 billion would be leveraged from other sources like the federal government.

Seattle: West Seattle Junction, At Grade To Ballard… That’s It?

The plan would build light rail to West Seattle Junction in 2033 and to Ballard via Interbay and a new Downtown transit tunnel by 2038. The plan calls for at-grade rail in Interbay and a moveable bridge crossing of Salmon Bay which cause some to worry that light rail to Ballard would be bogged down in traffic, both nautical and terrestrial. Sound Transit’s own study found that the at-grade option to be 5 minutes slower than a completely grade-separated option (23 minutes versus 18 minutes). We can take solace that a second Downtown transit tunnel is on the plan, but, without many additional Seattle destinations in the light rail network, that tunnel would also be more about expanding capacity for suburban commuters than it would be about helping Seattleites. If ST3 has $50 billion, why did Sound Transit not pick a gold standard rail option for Ballard? The Ballard-to-Downtown options that were entirely elevated or with a tunnel crossing of Salmon Bay show massively larger ridership. Options C-01B (elevated) and C-01C (tunnel crossing) each showed ridership of 102,000 to 133,000. With the opening of the University Link, the Central Link hit ridership of 57,000 on Tuesday. Option C-01B or C would more than double that, showing its colossal potential. So why did Sound Transit not go with the superior option on travel time, reliability, and ridership?

Finishing the Central Link spine north to Everett and south to Tacoma remains the central focus of Sound Transit’s vision. Everett promoted the extravagant option of routing to Paine Field picking up roughly the same ridership while spending about $2 billion more and taking 13 minutes longer than the I-5 alignment, and costing about $1 billion and taking 7 minutes longer than the most direct SR-99 alignment, according to Sound Transit own study.

Extending the East Link to the Redmond city center also got priority by being pegged for 2028 completion. Tacoma Dome would get service by 2033 and Tacoma Community College by 2041.

Meanwhile, Everett could be served by 2041 (a mere 26 years from now) via extensions of the Link spine. Same goes for Bellevue to Issaquah with a 2041 opening while the plan also calls for the extension of Sounder rail service from Lakewood south to DuPont by 2036.

The plan calls for tons of parking, including early deliverables to Kenmore, Lake Forest Park, Bothell, Kingsgate, several places along the Sounder and in Renton. Plus more later park and ride additions as more suburban stations go online. Early estimates showed that Sound Transit would spend somewhere in the ballpark of $1 billion on parking alone in the ST3 package. If we’re looking for funds for a Ballard-to-UW like we should be, this is one place to find them. Let the private sector handle more of our parking concerns as we’ve laid out. Don’t blow a billion of our precious transit dollars storing cars. Seattle Mayor Ed Murray asked Sound Transit CEO Peter Rogoff about starting to charge for parking at Sound Transit garages to recover operating cost if not capital expenses and Rogoff didn’t really have a firm answer beyond: we’re going to study/look into that.

BRT For The Suburbs

Bus rapid transit is slated for the I-405 corridor from Lynnwood to Burien and the SR-522 corridor from Bothell to the 145th Street Link station on the edge of Seattle, both to be completed by 2024. In an early deliverable, Sound Transit promises to implement shoulder-running for express buses, which may speed up service if highway traffic doesn’t become much more crippling than it is today.

Responding to Seattle’s request for early deliverables, the plan also promises unspecified capital improvements to the RapidRide C and D. Despite Sound Transit’s own stated goals of equity and following metrics and the like, no love was showered on RapidRide E, Metro’s most successful bus line which averaged 15,800 daily ridership in spring 2015. To compare, the D averaged 11,700 daily riders while the C averaged 10,100. Since no Sound Transit improvements are planned for the SR-99 corridor where the E runs, it would seem more appropriate, efficient, and equitable to invest in a corridor where BRT wouldn’t be made redundant by later ST3 rail investments. Doing so could shore up votes in under-served northwest Seattle.

A Continuing Lack Of Transparency

Although there was much fanfare around Sound Transit’s draft plan roll-out, the “bold” proposals came with minimal detail. Costs weren’t even broken down by line or phase, let alone by station or service type. John Howell from the independent expert review panel warned the board that their lack of transparency invited people to question their models and methods yet in the very same meeting Sound Transit neglected to release their cost estimates of its proposed projects. Releasing cost estimates may help explain to Seattleites why they do not get more for a plan that promises to leverage $50 billion. Moreover, the utility of the new light rail will depend on the efficiency of bus connections and Sound Transit has so far punted on the issue. We should demand they outline bus integration in the coming months.

After the plan was released, Seattle Subway tweeted, “We won on making ST3 big – now we need to make ST3 great. Stay tuned – we’ll need your help! #ST3″. The large scope of the plan certainly gives us a big canvas. But too much of it is painted with lower priority projects. Ballard-to-UW should be on the map, not just as a study. Seattle Subway’s idea to build Ballard-to-UW subway as an extension of the Downtown-to-Ballard line has promise. It would save on the expense of a separate operations and maintenance plant and allow east Ballard, Phinney Ridge, Fremont, and Wallingford residents one-seat rides to Downtown. It would also vastly improve upon the sluggish Route 44 bus and provide crosstown service, which is sorely lacking in the whole $50 billion plan.

Ballard-UW is the lowest hanging fruit, but Sound Transit also plans to swing the Ballard-to-Downtown line to the east to pick up South Lake Union and Denny Triangle in the process missing Belltown. Not serving Belltown is a huge oversight. Perhaps getting Belltown a deal like First Hill got where Sound Transit funds a streetcar would mitigate this disaster. Alas, a Belltown streetcar wasn’t included in the ST3 draft plan. Some, present company included, had floated the idea of a Metro 8 Subway so that South Lake Union can get a subway specifically dedicated to its needs while the Ballard line can take the most direct line downtown through Belltown. Sound Transit could throw Seattle the bone of at least studying something like the Metro 8 so we can see how feasible it is.

In summary, the whole timeline for Seattle rail improvements is troubling. Northgate will go online in 2021 and Judkins Park circa 2023, but ST3 doesn’t slate another Seattle station opening until 2033 with West Seattle. The ten year gap in light rail roll out is a problem, especially when Seattle, not its suburbs, is leading the region in growth. Ballardites would have to wait until 2038. Sound Transit also has refused to commit on the 130th Street infill station to the Central Link (citing concerns over jeopardizing federal funds) and has put off Graham Street station until 2036. These disappointments could just be Sound Transit under-promising in hopes of over-performing, but really we should expect both higher expectations and higher performance. Let’s push Sound Transit to build the infill stations as soon as possible, forge ahead on the Ballard-to-UW subway, upgrade the RapidRide E closer to BRT standards and fund transit in Belltown whether streetcar or otherwise. Seattle is the fulcrum of the light rail network that makes the rest of the system work. Subarea equity should not mean the suburbs build dubious projects out into the hinterlands while Seattle languishes for decades. The whole network will produce better ridership and results when more of Seattle’s core neighborhoods are well integrated in the system.