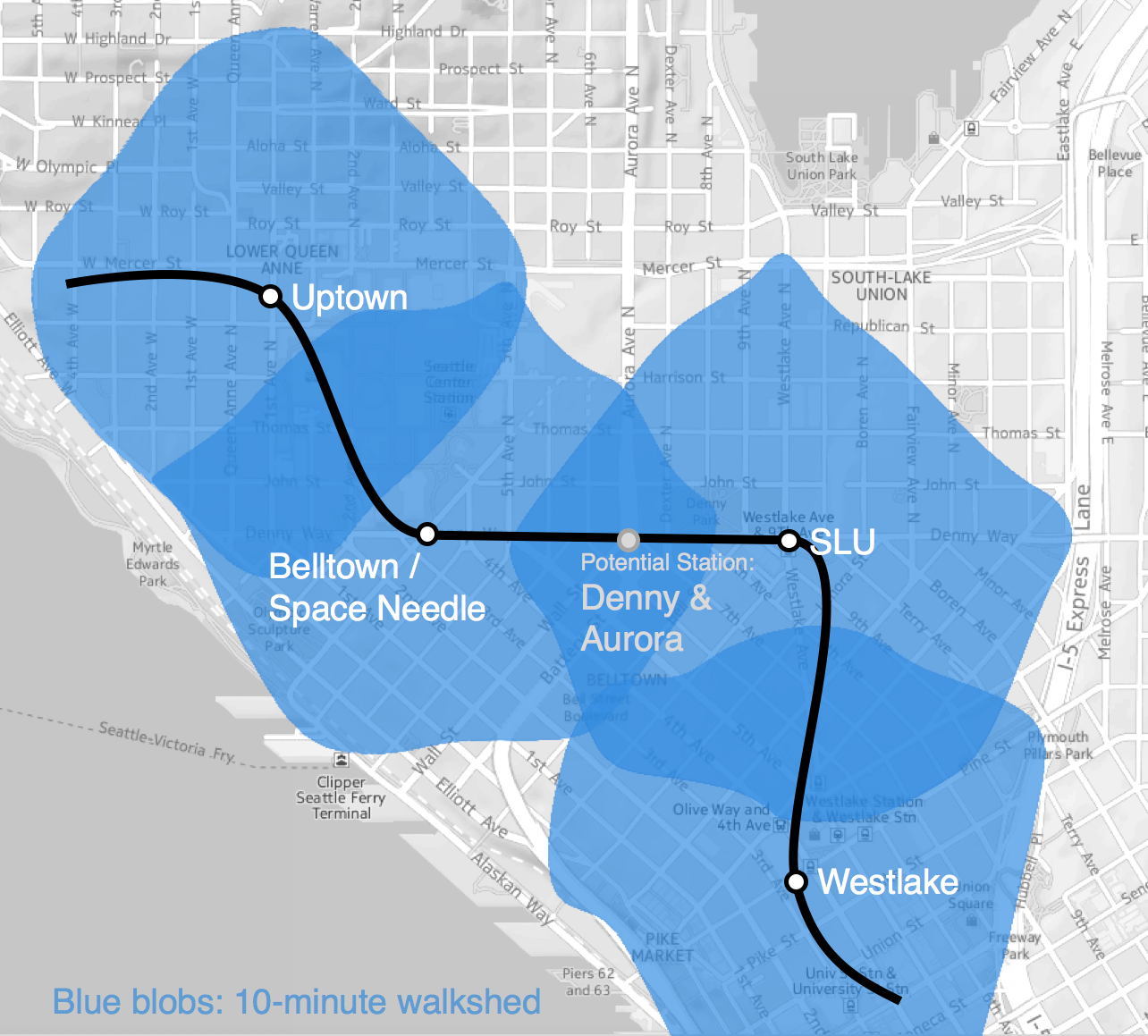 Potential new light rail lines for the upcoming Sound Transit 3 ballot measure were clarified further after a recent Sound Transit board workshop. From 4 options for the Ballard to Downtown line, only one provides a stop in Belltown, while the rest cover South Lake Union. This dichotomy need not be true. It is possible to combine service to the fastest growing job center (South Lake Union) with a stop that serves both the second densest residential neighborhood (Belltown), which is also a major employment center and some of our most popular tourist attractions (Space Needle and Olympic Sculpture Park).

This article builds upon the grade-separated (tunnel + elevated) alignment proposals only. Grade-separated lines can carry as much as three times as many people per hour compared to at-grade lines and do so with significantly higher reliability. Given that we are spending billions of dollars for a system that is to support strong population growth over the next 50 years, we get the highest return on our investment by building grade-separated lines.

The Seattle Department of Transportation has proposed two stops to Sound Transit: one at the heart of South Lake Union (Denny & Westlake) and one in the northwest corner of the neighborhood (Aurora & Harrison). Sound Transit has accepted the first proposal as part of its alignment options, but is treating the latter as a separate project. The proposal below moves that latter station to Denny & Broad and goes over the implications of that in terms of mobility, future extendibility, cost and performance.

Let’s start by looking at the 10-minute walksheds (in blue) of the two stations (courtesy of IsoScope):

Before we look at the benefits, it’s important to understand that the lines are roughly the same cost because:

Travel time is also roughly the same. While there are sharper curves in the Belltown alignment, they are all next to a station where the train has to slow down to a stop regardless.

To understand what we stand to gain or lose with each station, we can compare the difference in walk sheds. The area in red below is the unique non-overlapping part of the walkshed added by each station:

From a visual perspective, the Belltown stop could serve more residents, visitors, and likely a comparable number of workers to the SR-99/Harrison stop.

It also serves tourists better as a direct line from the airport covering all of Downtown, Pike Place, the Space Needle, WSF and the Victoria Clipper.

A tunnel under Denny also lays the foundation for a potential “8 Subway”, as proposed by the grassroots organization Seattle Subway. The Denny corridor has similar ridership to the Ballard-Downtown corridor (14,700 vs 17,200 projected in 2030, for each line respectively) and it is a great candidate for light rail. While a South Lake Union stop does provide a connection to Capitol Hill already, there are more destinations on the corridor that are outside of its effective walkshed — Summit, Hilltop, Madison Valley to name a few.

Regardless of whether an 8 Subway is considered, the Belltown stop can still serve far more people than a SR-99/Harrison stop in terms of residents, workers, and visitors. Even just the stretch on Denny from Westlake to Broad is very congested, yet a common corridor for South Lake Union workers living in Belltown.

If you want Sound Transit to consider a Denny & Broad station, e-mail them, tweet referencing @SoundTransit, or submit a comment online.