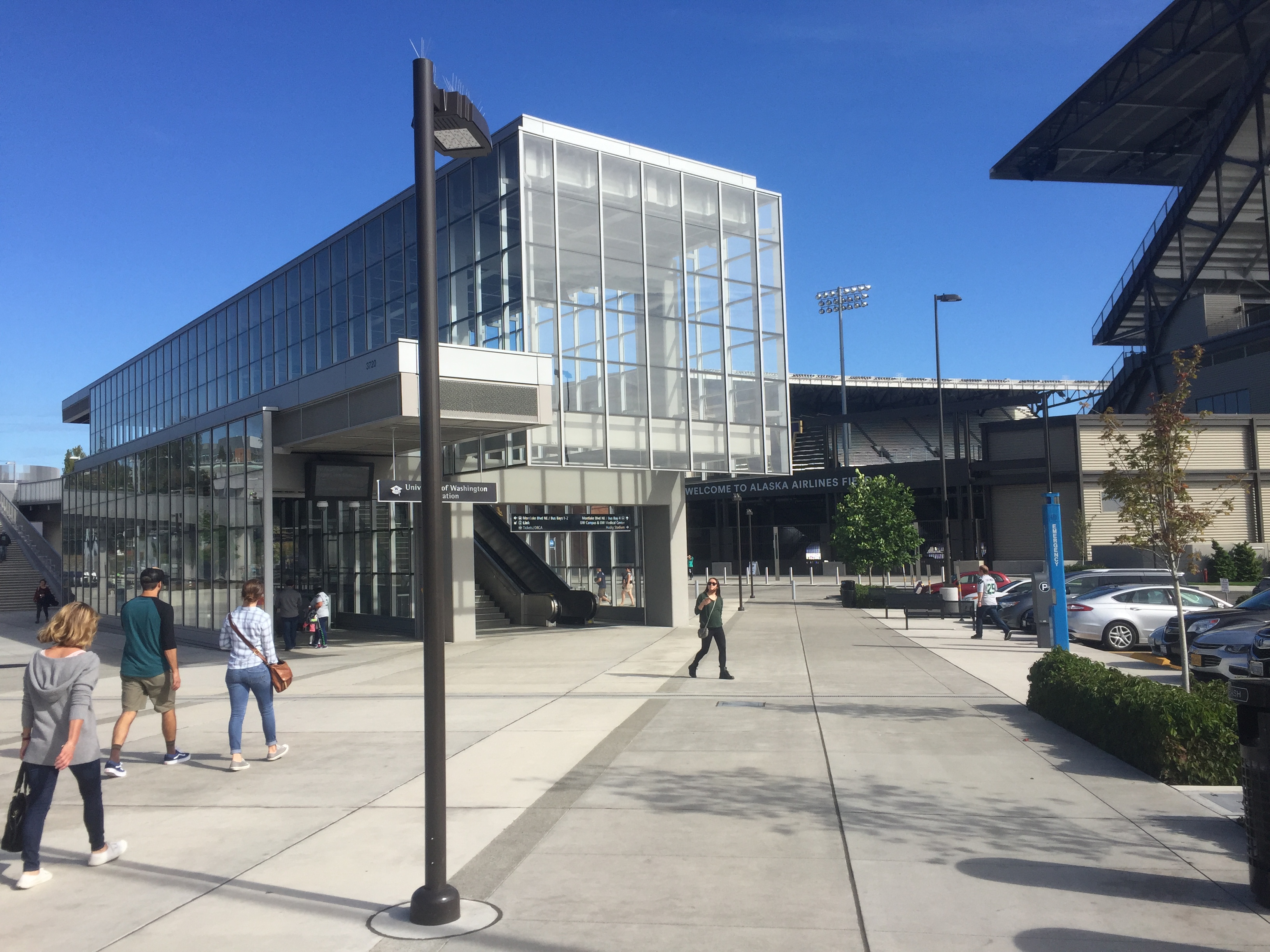 A common criticism of the upcoming ST3 ballot measure is that light rail is too expensive and we’d be better off with bus rapid transit (BRT), especially in the suburbs. This article looks at the economics behind such statements to see if ST3 is worth it or not.

First, we start with the rush-hour congestion map on the left (from October 4th at 8am). We can see that congested stretches of I-5 exist all the way from Everett to Tacoma and the same is true for local Seattle roads from Ballard and West Seattle. What this means is that more people are trying to travel on the freeway than its available capacity.

So how do we accommodate the extra people?

Why not widen freeways?

Before we do so it’s important to understand the concept of induced demand. This is really latent demand that only materializes once extra freeway capacity comes online. When congestion improves, people who were previously dissuaded from making certain trips now start making them. Moreover, as commutes shorten, new real estate development in areas previously deemed too far becomes possible, which in turn also creates new demand. So the new “empty” road space is quickly filled and consumed with traffic.

Now to be as fair as possible, travel demand is not infinite and it is possible to satisfy it with more lanes. The metric we are looking for is lane-miles per capita. Based on this, Kansas City, MO is #1 in the United States with 1.241 lane-miles per 1,000 people (1999 data) and experiences some of the lowest traffic delays for a major metropolitan area. Peak-time trips experience about a 20% increase in travel time (e.g., a 30-minute trip taking 36 minutes).

Seattle, however, only has half the number of lane-miles per capita at 0.652 per 1,000 people. If we want to have only a 20% delay in peak-hour trips we’d have to literally double all of our freeways and major arterials. Can you imagine a 22-lane I-405, a 20-lane I-5, and a 16-lane I-90 bridge? Even if you didn’t care about the impact on surrounding neighborhoods, building this across the region would cost hundreds of billions just for property acquisition. The cost would be at least one order of magnitude higher than what Sound Transit is proposing.

Buses allow us to move more people in a stretch of road than a car. A 60-foot bus packed with 120 people at rush hour takes up nine times less road space per person to carry than an 18-foot car packed with four people (and average car occupancy in our region is actually 1.6 people per car).

But if the bus can get stuck in traffic, the only incentive a person has to switch from their car to the bus is cost. And for most, that is not a strong enough incentive. To increase the percentage of people taking transit, it needs to offer something that auto travel does not–the reliability of not getting stuck in traffic. In other words, it needs dedicated right-of-way.

Now, we do have a network of HOV lanes, but it is not consistent and not managed to avoid congestion completely. So even with the HOV network buses still get stuck in traffic between HOV lanes and often in the HOV lanes too.

What we need is a network of lanes that are always free-flowing regardless of:

This is hard. Events and crashes often make congestion expand to take a larger portion of the freeway than usual commute traffic. Additionally, new real estate development brings more people to our region and the area of regular commute congestion slowly expands as well.

So to avoid congestion in any of the scenarios above we really want dedicated HOV right-of-way that:

How do we get this? We can’t simply reallocate a general purpose lane for this. This is a political non-starter. While it is relatively cheap to implement, no car commuter wants to lengthen their commute so that “somebody else” can have a better transit or carpool trip. People have never supported this en masse.

The only option we have is to build the new right-of-way—either widen the freeway or build the lanes in a separate structure using viaducts and tunnels as appropriate.

Take a look at the money they spent on two recently completed projects to understand where the money went:

Breakdown: 87% spent on new right-of-way plus 13% spent on light rail.

* Actual trackwork is specifically part of the U830 contract which is under Systems, not under “Guideway and Track Elements”. So light rail components are not counted erroneously.

Breakdown: 80% spent on new right-of-way plus 20% spent on light rail.

Note: Financing cost not included in breakdowns above as it is proportionally distributed for all spending categories.

Also, bus rapid transit would cost at least 80% as much as light rail!

Without the cost of dedicated right-of-way it would not be bus rapid transit and it would not attract new ridership. And if you want to use electric trolleybuses instead of diesel buses, even that 20% savings over light rail starts to erode because the electrical systems are the most expensive part. Rail itself is actually so cheap as to be negligible in cost if installed while the guideway is being built.

Now if the cost is the same, you may wonder, why choose light rail over buses? Because it truly maximizes the benefit you get out of your new right-of-way—the theoretical maximum for our light rail system is 32,000 people per hour per direction (today, it’s 16,000 on the existing line before ventilation and emergency escape upgrades are made) while with buses we can only move 6,000 to 9,000 people per hour without bus bunching. And if this math changes in the future, nothing prevents us from repurposing the right-of-way—if it can carry 400,000 lbs trains (four cars), it can certainly carry buses (40,000 lbs per bus) as well.

When opponents of ST3 say that bus rapid transit is cheaper than light rail, they are not speaking of true BRT, but simply of more buses. If we want to provide a service that is actually better in the most important way—the ability to avoid congestion travel delays, we need to let Sound Transit do their main job—build new right-of-way—and there are no shortcuts to be taken there.