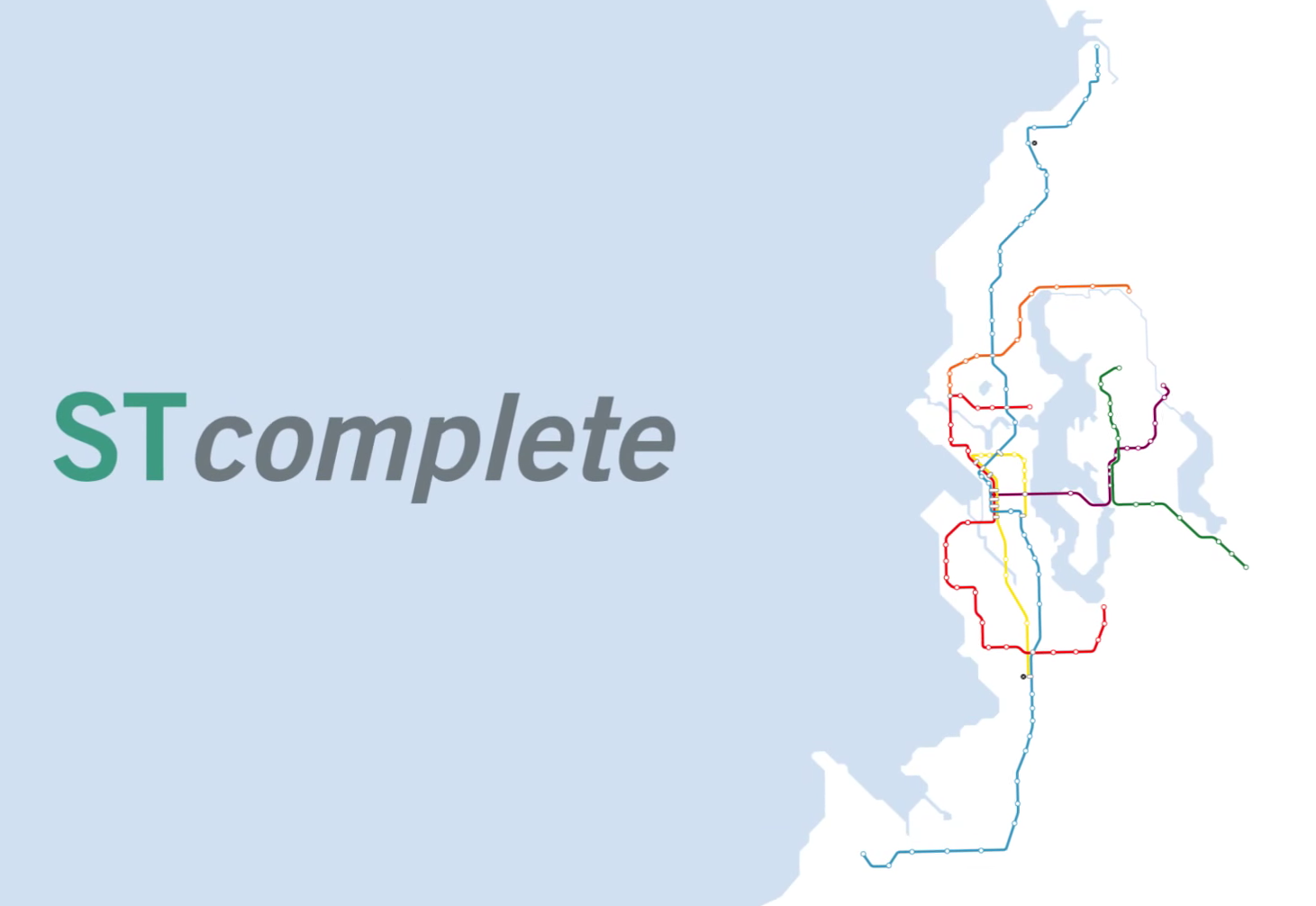 Seattle Subway has proposed an alternative to Sound Transit 3 (ST3) called “STcomplete” that would double the project timeline from 15 to 30 years and allow Sound Transit to “complete” the network, rather than going back to the voters to approve further funds after first $15 billion is spent.

STcomplete would allow Sound Transit to offer benefits to the whole electorate, Seattle Subway argues. By contrast, $15 billion planned for ST3 is not enough to build rail near every major constituency voting on the measure. And since Sound Transit Board of Directors seems to be prioritizing very expensive rail to West Seattle, Seattle’s portion may not stretch very far at all.

Seattle Subway plans to exploit the fact that Olympia hasn’t set a sunset clause on Sound Transit’s taxing ability. They could raise a billion dollars a year indefinitely. Sound Transit would be within its legal parameters to put a 30-year, $30 billion proposal on the ballot with a wider selection of improvements to entice voters. Per year, the funding commitment doesn’t go up. It’s just a longer commitment.

The possibility of funding an extensive network in one fell swoop is tantalizing. The risk of Seattle Subway’s approach is that it could give fiscal conservatives and anti-transit folks enough ammunition to shoot down the ballot measure, sending us back to square one.

Meanwhile, Seattle Transit Blog has presented what they call a “peanut butter plan” using bus rapid transit (BRT) to stretch higher quality service to West Seattle and points south, and still allow enough money for the for the Ballard to UW rail line sometimes called the “Ballard Spur”. It’s a refreshing approach, but would BRT be enough to seriously improve the transit experience in outer Seattle and get people to vote for ST3?

Both plans address the troubling direction Sound Transit seems to pushing ST3 in Seattle. The West Seattle to Ballard light rail line is expected to cost upwards of $7 billion, exhausting the entirety of Seattle’s subarea funds. The Ballard Spur subway can connect Ballard to Downtown via Link at almost the same travel time as the more expensive Interbay route, and it would pick up Upper Fremont and Wallingford along the way. Interbay, on the other hand, is lightly populated and not much of a destination.

Sound Transit estimated the Ballard Spur subway (the A3 option) would cost between $1.4 billion and $1.9 billion. However, their initial study included only one station between Ballard and the University District, a glaring oversight. Seattle Subway issued a A4 plan that rectified that, including stations for West Ballard, East Ballard, Upper Fremont, Wallingford, and the University District. The two additional stations would bump up the cost, but $2 billion is a fair ballpark estimate and would still be a bargain considering how substantially the subway would improve on the tortuously slow Route 44 bus, and provide a 20-minute ride to from Ballard to Westlake Station crushing the times of the RapidRide D Line (about 30 minutes on a good day, but often much longer).

Meanwhile, tunneling directly from Ballard to Downtown via Interbay causes costs to balloon above $3 billion, according to Sound Transit’s study. Plus, I imagine engineering a tunnel underneath Salmon Bay could be challenging and lead to cost overruns. If we don’t build a Ship Canal tunnel, we’re stuck with reliability issues since a bridge has to go up or swivel to allow ship traffic to pass. And a lift bridge or a swivel bridge ain’t cheap either. The Interbay alignment would be faster to Downtown, but would not address the issue of slow east-west movements. I’m not saying never build the Interbay route — which not only could be faster for Ballardites, but also connect Lower Queen Anne and Belltown along the way — I just think the Ballard Spur is a higher priority.

This is where STcomplete pulls away from ST3. Conceivably, STcomplete could allow us to build both the Ballard Spur and the Ballard to West Seattle line in time. The sting of whichever route they choose to build first will be lessened by knowing another option will be on the way eventually. There is some argument about whether light rail is even the right solution for West Seattle, but at least if we are going to make the huge investment to built a questionable light rail line, it won’t be one of the only things Seattle proper gets out of the next ST package.

So push the Sound Transit Board of Directors to put STcomplete on the ballot November 2016, or at least to prioritize the right projects in ST3. Below is how I would prioritize for Seattle. Granted, Sound Transit might need to be dragged kicking and screaming into boring a urban subway like the Metro 8 (replacing the Route 8 bus). Still, we are allowed to dream.

I’m totally spitballing with the budgets. Inflation alone could drive the project costs way up over a hypothetical STcomplete’s 30 year life span.