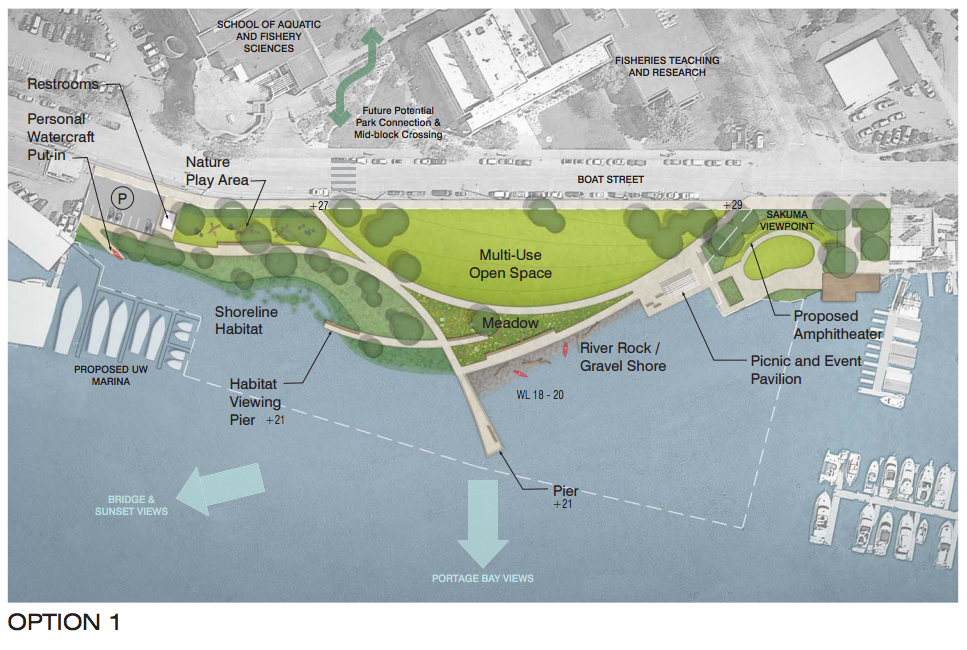 The University District is slated to get an expanded park space on the shores of Portage Bay in the coming years. The project, tentatively billed as the Portage Bay Park, is already midway through a planning and design process. The Seattle Department of Parks and Recreation (DPR) is leading that effort in conjunction with consultants Walker Macy and hopes to have the 3.59-acre open space in place by 2018. Park planners envision an active and passive park space that is widely reflective of the natural shoreline environment. Initial concepts include many water-oriented features like piers, beaches, hand-carried launch points, and over-water viewing points.

The shoreline park location lies at the southernmost end of the University District, in an area largely dominated by the University of Washington. The site abuts a small park space called Sakuma Viewpoint. It’s a hidden gem known mostly to local students, staff, and patrons to Agua Verde Cafe and Paddle Club. As its name suggests, it’s a viewpoint with a small clearing and seating for park guests. The University of Washington owns the property, but the DPR hopes to integrate the space into the wider Portage Bay Park.

Aside from the Sakuma Viewpoint and Agua Verde, the local vicinity is fairly builtout with a variety of other uses. To north, there is a collection of aquatic-oriented teaching facilities and the burgeoning West Campus, which is home to numerous dormitories and thousands of students. To the west, there is a considerable mix of local retailers, restaurant, offices, warehouses, and other light industrial businesses. And to the east lies the University of Washington’s health sciences and medical center complex.

The heart of the University District is only a stone’s throw away. Walking times from the neighborhood core, roughly NE 45th St and University Way NE, are no more than fifteen minutes. But the park is also geographically close to the Burke-Gilman Trail and the main University of Washington campus.

No funding for the project is coming from the City itself, despite being the lead agency in planning and development. Instead, the City has received $11.3 million in funding from the Washington State Department of Transportation (WSDOT) and the University of Washington.

WSDOT’s $9 million share derives from required mitigation associated with SR-520 project. WSDOT is required to pay dollar for dollar on impacts to the Waterfront Trail, which includes the boardwalk connecting the former Museum of History and Industry site at Montlake to Marsh and Foster Islands in the Arboretum. That facility was built in the 1980s using a federal grant from the Land and Water Conservation Fund, which is specifically conditioned for mitigation if impacts are ongoing. The scope of the SR-520 project, however, is much wider with impacts to the Washington Park Arboretum, East Montlake Park, and McCurdy Park, for which WSDOT is also providing mitigation against.

Meanwhile, the UW’s additional $2.3 million is specifically earmarked to address on-site contamination associated with the Portage Bay Park site. That’s because the property had long been the subject of active light industrial uses. The property now houses the headquarters of the University of Washington Police Department in the Bryant Building, but campus police operations will eventually be transferred to a new location on 15th Ave NE (a few blocks to the northeast) in 2016. The DPR plans to remove all of the structures from the site to create whatever desired open space is ultimately selected.

As a first step though, the DPR will have to evaluate the historic quality of the Bryant Building due to building age. That’s a typical requirement in the City’s development process. The DPR recognizes that the site was originally home to a Chris Craft dealership, the first in the region. It’s possible that the building is eligible for listing as a historic structure by the Landmarks and Preservation Board, but such status does not necessarily mean that a structure must remain. As is often the case, the building could be listed on a historic register, removed, and be commemorated through interpretive features onsite or other means.

The first option differs from the others in its undulating arcs as a design strategy. This offers a unique chance to weave continuous pathways together in a swooping fashion and brush the waterfront. As a focal point, a pier might extend into the bay for better views and an intimate water-oriented experience. On land, entertainment venues could be prominent venues. A picnic and event pavilion as well as a new amphitheater at Sakuma Viewpoint would tie the spaces together with passive and active recreation opportunities.

The second option is a linear and perpendicular design approach. Four sets of pathways would connect to each other at specific points, usually with key features at their ends. Two of the paths would lead to piers; one would serve as a habitat viewing pier while the other would terminate with a dock-like structure for commanding views of the bay. Meanwhile, the western shores of the park would be manicured with a small beach and tie-offs for canoes and kayaks.

The third option is a fairly rigid design with zigzags and heavy interventions into the landscape. Seating walls would be built into the slope, overlooks at the street, and extensive shoreline habitat restored. A single pathway would be the focus of the space with a pathway progressively fanning out as it reaches for the shore. At the end, a significant overlook would peek out from the shoreline to provide park-goers a space to appreciate the bay. Unlike the other options, a hand-carried boat launch point would be more modest in size.

To give a sense of what these different park elements might look, the DPR prepared a collage of exemplar modern park spaces.

What should be evident from the images is the relationship toward water. Kayaks, canoes, wood logs, and piers are reinforced in the imagery. The designs themselves also tend toward a modern and utilitarian aesthetic.

The DPR received a wide range of public comments on individual aspects of the park design concepts. On the issue of a park and its location, there was overwhelming support. General consensus was also struck on key design issues, including:

Park planners are now in the process of refining project concepts based upon public feedback. Sometime in January, park planners will hold an open house to share a final park concept where the public can provide additional feedback before the project proceeds to final design, engineering, and permitting. The overall project timeline is somewhat aggressive; the DPR hopes to break ground in 2017 and complete the project in 2018.

Base drawings of existing city context produced by Mahlum for the University of Washington.