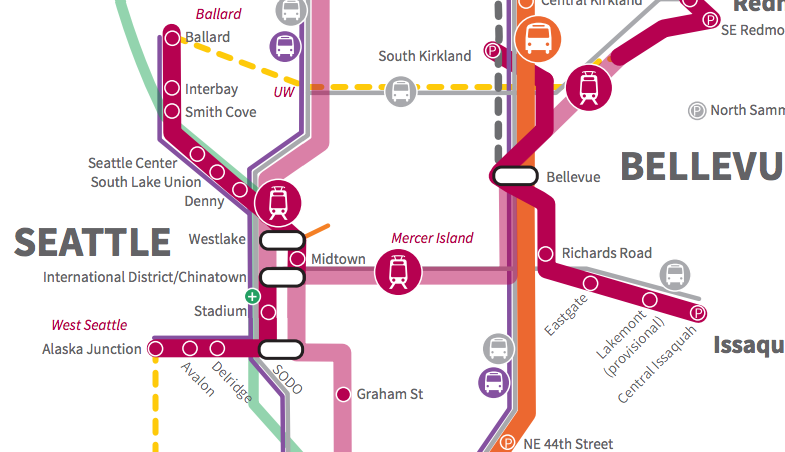 At its special board meeting Thursday, the Sound Transit board voted unanimously to move forward with the full set of ST3 projects, with the new expedited timelines, that were proposed at their last board meeting and which we wrote about last week.

These projects were approved now in order to allow Sound Transit staff time to set language in stone in advance of the Sound Transit board voting to send ST3 to the November general election ballot on June 23rd.

At the meeting, Sound Transit staff laid out how the ST3 plan compares to the two previous Sound Transit ballot measures: it essentially doubles the scope of the still-under-construction ST2 plan, creating two entirely new lines, requiring the addition of two maintenance facilities, and the purchase of 260 more light rail vehicles.

In Seattle, with the fight over at-grade light rail on 15th Avenue W settled, the discussion will likely turn to what the Ship Canal crossing will look like, how the West Seattle alignment will serve that neighborhood, and the new Downtown tunnel. With Sound Transit’s track record of coming in under budget on large capital projects recently, provisional projects like light rail to White Center and Ballard to the University of Washington just make sense to be included, but it remains to be seen if the Sound Transit board is willing to tack any more projects onto its Christmas tree before the June 23rd vote.

Former Sound Transit boardmember Mike O’Brien seemed to suggest last week that he sees the possibly of making changes to the plan as outlined this month in the future: “The draft plan remains flexible enough that if our communities continue to be united, I am confident we can make significant improvements even after the passage of ST3, in the years to come,” he is quoted as saying. The projects are subject to alternatives analysis, and O’Brien might be leaving the door open to changes like a tunnel underneath Salmon Bay as opposed to a drawbridge.

King County Executive Dow Constantine was less circumspect: “The public sent us a clear message: We want light rail and other high-capacity mass transit, and we want it as soon as possible. That’s exactly what the Sound Transit Board approved today.”

Sound Transit’s last ballot measure in 2008 was approved by a large margin of 58% to 42% and its chances in a presidential election year are looking similarly rosy.