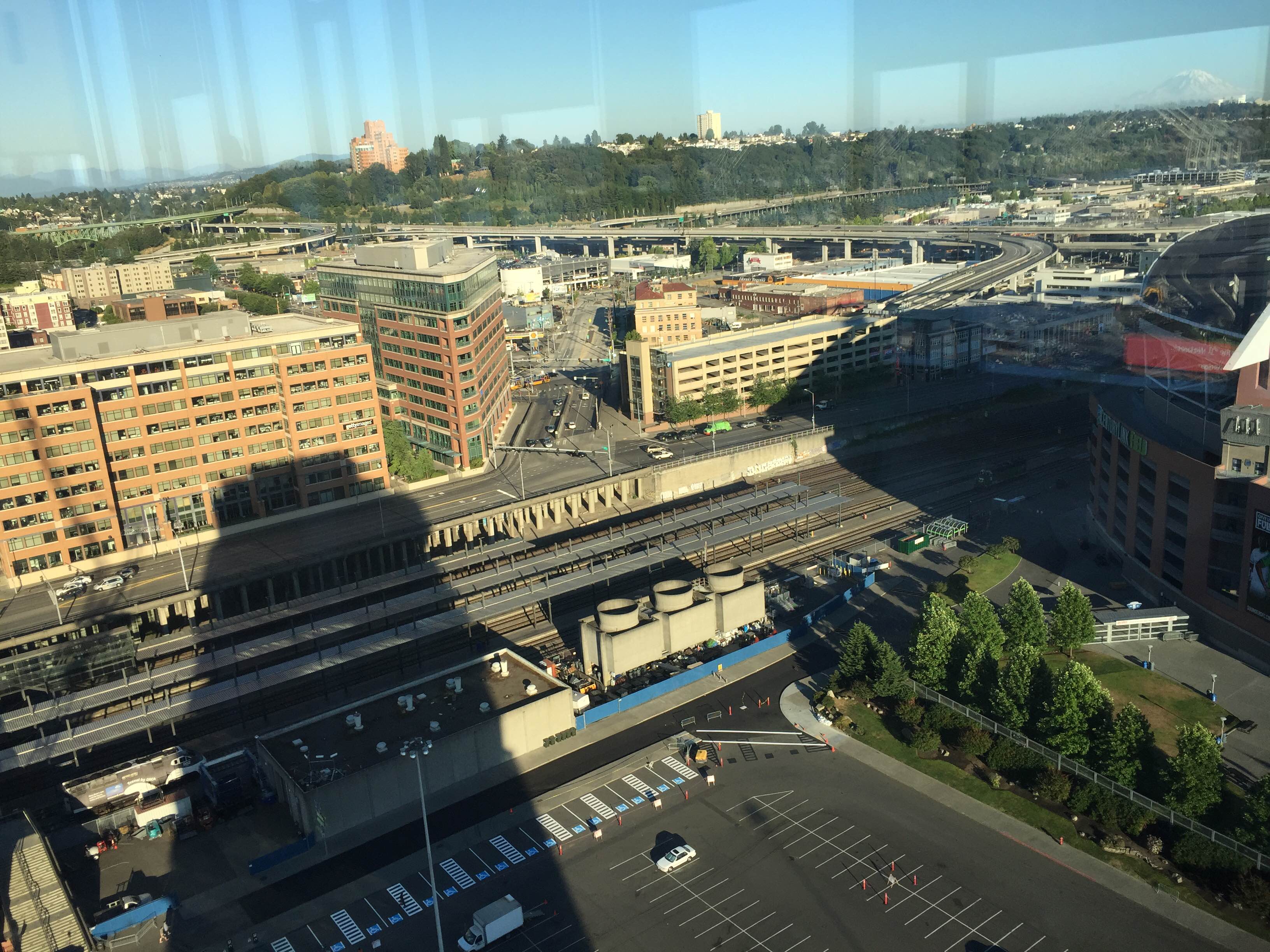 For the past two years, the Washington State Legislature has struggled to pass a comprehensive transportation package to fill the immense backlog of maintenance and repair of existing infrastructure while funding new projects. But yesterday, the Legislature finally came to a compromise on a transportation package that will fund statewide infrastructure investments over the next decade while also granting some local authority for transportation options. SB 5987 will spend $16.1 billion on new highways, maintenance and repair of infrastructure, and investments in multimodal projects and programs. It also grants Sound Transit the full funding for sought for Sound Transit 3.

Getting to this point, however, was long-fought. Democrats and Republicans had deep disagreements on various elements of a statewide transportation package. In fact, the two sides repeatedly failed to come to an agreement throughout the legislative sessions in 2013, 2014, and 2015. Rep. Judy Clibborn (D-Mercer Island) and Sen. Curtis King (R-Yakima) had been leading negotiations on transportation issues in the House and Senate since late 2012.

Democrats promoted varied funding mechanisms (including a carbon fuel tax), funding for modest multimodal infrastructure (walking, biking, and transit projects), stronger emphasis on maintenance and repair of existing infrastructure over previous statewide transportation packages, and full funding for Sound Transit 3 and local transportation options. Republicans on the other hand were focused on new highway projects over maintenance and repair, largely opposed multimodal projects, disputed the size of a package, and tried to kneecap Sound Transit 3 from the beginning.

After a series of last-minute amendments to SB 5987 on Tuesday night, the House passed the bill on a 55-44 vote while the Senate confirmed the legislation Wednesday morning in a 37-7 vote. In the House, the bill primarily relied on Democrats to pass it, although some Democrats voted against it, including: Brian Blake (D-Aberdeen), Hans Dunshee (D-Snohomish), Joe Fitzgibbon (D-Seattle), Carol Gregory (D-Federal Way), Drew Hansen (D-Bainbridge Island), Christine Kilduff (D-University Place), and Kevin Van De Wege (D-Sequim). Rep. Joe Fitzgibbon was the only Seattle Democrat in the House to turn out against the package, largely due to the the anti-low-carbon provisions in the bill and poor environmental policy as a highway-first bill. Meanwhile, the Senate was much more collegial with Democrats and Republican generally supporting the package.

Aside from new taxes, the transportation package will offer significant opportunity for investment:

What’s In The Bill

For starters, a series of tax and fee changes and some tax credits. New taxes and fees will go into effect on the special fuel tax, motor vehicle gas tax, licensing and registration fees, and vehicle weight fees for passenger vehicles and haulers. Although there are tax credits for businesses that partake in the Commute Trip Reduction program and for electric vehicles. For most motorists, the motor vehicle gas tax will be the most noticeable change.

Over the next two years, the state motor vehicle gas tax will rise from 23 cents to 34.9 cents per gallon–an 11.9 cent increase in total. The first increase begins on August 1, 2015 and will top 30 cents per gallon. The second increase will go into effect on July 1, 2016 and will rise to 34.9 cents. For motorists, this represents a 51% increase in gas taxes in a relatively short period of time. But with ever-rising inflation, more fuel efficient vehicles, declining per capita vehicle miles traveled, and the fact that there hasn’t been a gas tax increase since 2008, the actual increases in the tax are relatively modest.

A particularly blunt provision in the legalisation is the “poison pill”. This language ties the state’s hands for establishing low and clean carbon fuel standards. If any state action were to establish such a standard, all money for transit, Safe Routes to School, Complete Streets programs, and other similar greenish programs would be eliminated. Previously, Governor Jay Inslee called for the establishment of a carbon tax on fuels like gasoline or similar approaches to drive down fossil fuel use in the state. But, Republicans balked at this and threatened to prevent passage of the transportation package unless it included the “poison pill”. For a taste of how this provision reads in various sections of the bill, Subsection (3) of Section 202 offers a good flavor:

(3) Beginning July 1, 2022, in addition to the motor vehicle weight fee as provided in subsection (1) of this section, the department, county auditor or other agent, or subagent appointed by the director must require an applicant to pay an additional weight fee of ten dollars, which must be distributed to the multimodal transportation account under RCW 47.66.070 unless prior to July 1, 2023, the actions described in (a) or (b)of this subsection occur, in which case the portion of the revenue that is the result of the fee increased in this subsection must be distributed to the connecting Washington account created under section 106 of this act.

(a) Any state agency files a notice of rule making under chapter 34.05 RCW for a rule regarding a fuel standard based upon or defined by the carbon intensity of fuel, including a low carbon fuel standard or clean fuel standard.

(b) Any state agency otherwise enacts, adopts, orders, or in any way implements a fuel standard based upon or defined by the carbon intensity of fuel, including a low carbon fuel standard or clean fuel standard.

(c) Nothing in this subsection acknowledges, establishes, or creates legal authority for the department of ecology or any other state agency to enact, adopt, order, or in any way implement a fuel standard based upon or defined by the carbon intensity of fuel, including a low carbon fuel standard or clean fuel standard.

Transit, bike, and pedestrian advocates will, however, be happy to know that a whole suite of local options will be added under the transportation package.

Sound Transit 3 Is A Go

To fund a $15 billion transit package under Sound Transit 3, the legislature has provided new taxing capacity and options for Sound Transit. However, before Sound Transit can proceed, it must formulate a plan for voters to consider in conjunction with the funding options. Sound Transit anticipates a public vote in November 2016, which could include expansion of light rail “spine” to Everett and Tacoma, create a new light rail line in Seattle (e.g. Ballard-to-West Seattle), deploy BRT and more Sound Transit Express bus service, and offer enhancements to Sounder.

The agency has authority to institute three different taxes to fund Sound Transit 3: a property tax of 25 cent per $1,000 dollars of assessed value of property within its taxing district, an additional 0.5% in sales tax, and a motor vehicle excise tax (MVET) of 0.8% of the vehicle value annually.

The maximum property tax is authorized to pay for costs associated with planning, designing, constructing, and maintaining transit facilities of Sound Transit 3. It may also be retained in full until all bonds have been retired. After this, the property tax must be reduced to the amount needed to operate and maintain the transit system or eliminated unless extended by a vote of the people. Meanwhile, the MVET would end once all bonds have been retired.

But all of this comes with two more “poison pills” and some minor caveats: one to pay the piper, another preclude state grant funding, and two requirements to fund and facilitate affordable housing development.

To stick it to Sound Transit and fund state obligations, the Republicans fought for a $500+ million tax on Sound Transit 3. Originally, this would have been siphoned off to the state highway fund, but Rep. Jessyn Farrell (D-Seattle) cleverly threatened to amend the bill with a referendum requirement unless the money went back to the Puget Sound communities from where it was derived. Republicans were concerned that this would result in an unholy alliance of conservative anti-taxers and progressive urban-green voters to kill the transportation package later this year at ballot. This money instead would be directed to the “Puget Sound Taxpayer Accountability Account” to fund K-12 and higher education programs. The funds must be expended in relationship to how revenue is collected with the Sound Transit subareas.

Another provision would end state grants for Sound Transit projects that are associated with any “omnibus transportation appropriations” if Sound Transit 3 taxes are imposed. The sole exception to this are grants for transit coordination. It’s a sneaky provision that will raid millions of dollars from Sound Transit so long as it is law.

If all of that weren’t enough, one uniquely odd provision is hidden with the Sound Transit legislation:

A regional transit authority that imposes a motor vehicle excise tax after the effective date of this section, imposes a property tax, or increases a sales and use tax to more than nine-tenths of one percent must undertake a process in which the authority’s board formally considers inclusion of the name, Scott White, in the naming convention associated with either the University of Washington or Roosevelt stations.

Needless to say, the breadth of this transportation is expansive. There’s a lot to love and hate regardless of where you stand on transportation.

*Affordable housing is defined as 80% of the area median income per the bill.

Update 1: There are two remaining bills that still need to be passed: the bonding and appropriation bills.

Update 2: All necessary transportation bills were passed out of the Legislature and signed by the Governor.