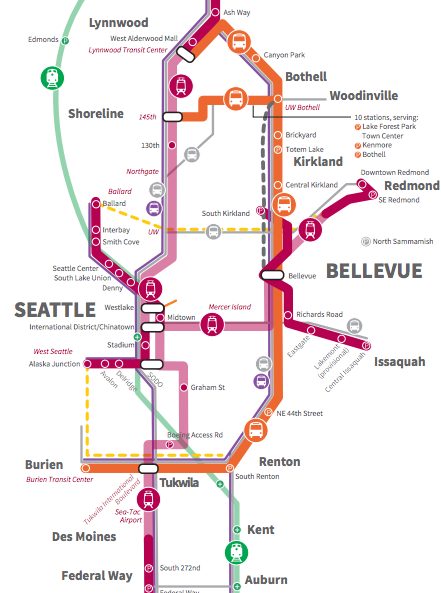 Here we find ourselves again: trying to untangle a web of lies, insanity, and inanity courtesy of the crack editorial board at The Seattle Times led by publisher and CEO Frank Blethen of Mercer Island. The Blethen Family Singers opined Sunday that it was time to slow down rather than “rushing” the Sound Transit 3 (ST3) package with its $27 billion in new local revenues on the November ballot. They couldn’t be any more wrong.

We’ve taken surveys, we’ve held meetings, we’ve hired consultants, we’ve debated line by line, we’ve weaved our way through ultimatums and weathered tantrums, and come November it will be time to vote. Just this package has been a four-year process.

Via a memo, Sound Transit responded to Blethen and the Slow Down Gang:

There has been more than 3-1/2 years of discussion leading to the Sound Transit Board’s development of the Sound Transit 3 plan, with four rounds of formal public involvement. The Board’s first Sound Transit 3 workshop took place on November 29, 2012. At that time the Board decided to move forward with a timeline to enable a November 2016 ballot measure in response to strong public interest across the region for further regional transit expansions.

And let’s not drudge up painful memories of Atlanta eating our lunch in the 1970s and building a heavy rail system while we bickered, waited, and dithered over fiscal prudence. Penny wise that was. Penny wise!

We’ve had process and then some. And it turns out our region isn’t nearly as conservative as its paper of record. The commute-weary folks of Puget Sound want light rail and they overwhelmingly wanted it sooner and more prolifically than the smaller 15-year package originally conceived. So Sound Transit adjusted the only way it could based on every city wanting more and sooner. They upped the package. And we applaud Sound Transit for listening to the people.

Blethen and His Bus-Loving Buddies proposed that the region’s commuters stay on buses, waiving the bus-rapid-transit flag like a matador trying to exhaust a bull. Here’s the problem: Sound Transit’s buses face plummeting speeds and reliability due to congested HOV lanes on I-5 and I-405. Between 2012 and 2014 express bus travel times jumped dramatically.

The disparity between average HOV travel time and “reliable” travel time shows how frequently something goes terribly wrong on folks’ morning commutes. The Washington State Department of Transportation defines “reliable” as the time allowance required to arrive on time 19 out of 20 times, which seems the bare minimum for employees seeking to remain employed. This is unlikely to get anything but worse judging by our rapid population growth. Sound Transit expects the region’s population to increase by more than 800,000 by 2040. And don’t believe for a second that Blethen and The Mercer Island Brain Trust would support converting general purpose lanes to dedicated transit lanes in order to actually follow through to make a bus rapid transit network function.

So in most worlds, we’d have established the need for major transit upgrades and more than justified the process of designing the transit package. In The Seattle Times editorial world though, it’s always time for equivocating. So let’s continue on to more asinine points.

No, Sound Transit did not cause the education funding crisis nor would it exacerbate it. Just like the day before Blethen and The Concern Troll Posse threw everything but the kitchen sink at ST3, fixing the education funding crisis remains on the state legislature’s plate. Regional taxing authorities will continue to have room under their property tax caps to levy more monies for education after ST3 passes. (And just wait until the legislature proposes an education funding scheme and the Blethen Blatherers tell us throwing money at the problem won’t solve it because we need reform first.)

Blethen’s Better Wait Brigade suggested a pause and reset would cause no delays in ultimately improving transit. This doesn’t pass the sniff test. Delaying the ballot’s passage or shrinking the package inevitably means folks get light rail later. The beauty of passing a measure now is that transit planners get to flow the projects one into the other earning efficiencies on the way. There’s no way pausing and resetting produces Ballard-to-Downtown light rail sooner.

Sorry, Preston “Muddy The” Waters, ST3 is not a blank check. Sound Transit’s memo detailed the strict framework under which the agency operates:

The facts are that legally binding provisions in ST3 will require the ST3 taxes to be rolled back following the completion of projects and the repayment of bonds unless a future public vote directs otherwise. The rollback will reduce the taxes to only cover the costs of operating and maintaining the system.

The Fault In Our Cars

So, how could The Seattle Times editorial board be so misinformed? I don’t know, but some have pointed out that some of the largest newspaper advertisers are car dealerships and McMansion builders. So I don’t what to impugn motives, but it seems like the suburban status quo works pretty well for The Suburban Times. And editorial board member Brier Dudley thinks there’s a war on cars so maybe the board shares this windshield point of view and deep-seated paranoia.

Another theory, since The Seattle Times supported Sound Move in 1996 but opposed ST2 in 2008 and now ST3 in 2016, perhaps they are self sabotagers who like setting ambitious goals and then completely undermine their implementation? Makes for plenty of editorial fodder, I guess.

Whatever the reason, the Blathering Blethen Brethren apparently need to run the numbers again and invent 25 years worth of property tax returns so they can conjure a scary number out of thin air, but here in actual transit-riding reality we say the time is now.