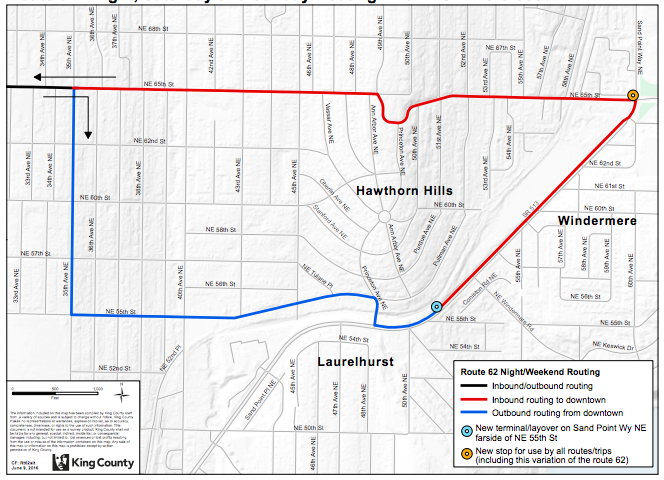 A bit more than a week ago, King County Metro made a quiet revision to the northeastern tail of Route 62. Introduced as part of the major Northeast Seattle bus-to-Link restructure, the route has been plagued with unreliability, overcrowding, and sluggish speed since the day of its launch. Metro had hoped to build a successful new east-west route in Northeast Seattle in anticipation of a light rail station in Roosevelt opening sometime in 2021, but the jury is out on that.

In the early weeks, Metro heard from many angry riders who faced severe overcrowding south and west of Roosevelt during peak hours. To save face in a clear PR crisis, the agency added extra trips to relieve some of the pain. But word on the street is that overcrowding is still deeply persistent south of Wallingford. Juxtapose that to ridership east of Roosevelt where there has been an apparent decrease on the corridor. With the mangled routing of the 62 and an axe taken to the 71, riders in the area have found the service almost less than useless.

That’s not exactly surprising. Metro dropped the ball on the eastern tail from the beginning. In an effort to serve NOAA, the University of Washington, and other employers at the northern end of Magnuson Park, Metro set up a routing that runs along Sand Point Way NE and terminates in a loop on the NOAA campus. The problem there is that NOAA is only open on weekdays, and specifically only during weekday daytime hours. On weeknights and weekends, the NOAA campus is closed meaning that buses can’t access the layover stop and loop. Metro’s solution from the start was clunky and confusing:

But if all of that was bad, Metro has managed to mangle things even worse.

Metro’s “solution” to the NOAA loop problem was to create an even bigger loop. A ten-block loop to be exact. Eastbound buses now turn south at 35th Ave NE as far as NE 55th St before continuing east towards Sand Point. Buses layover at a new terminal on Sand Point Way NE at NE 55th St—a full 25 blocks south of its former terminal. Westbound buses depart from the Sand Point Way terminal and continue as far north as NE 65th St before heading east on their normal course.

If the problem here isn’t evident, let me spell it out. Riders who live on the original NE 65th St stretch east of 35th Ave NE now face an absurd decision if coming from Downtown Seattle or Wallingford:

The tail near NE 65th St and Sand Point happens to be in a major mutli-family area with over two dozen apartment and condominium buildings with in a five-minute walk. Many of the dwellings are specifically targeted to lower-income individuals. In fact, Solid Ground manages an entire apartment complex at the footsteps of Magnuson Park.

Meanwhile, weekend and nighttime riders who live on the new loop now have bus service dangling at them, but which is wholly unreliable and convoluted making it hardly worthwhile to learn the schedule and nonsensical routing.

The easier solution for Metro would have been to simply use a bus loop at Magnuson Park. Google Maps seems to even think there’s one on NE 64th St and Radford Dr NE with a bus stop on NE 65th (there used to be up until the last service change). The main drawback of that loop option is adding a layover and stop space near NE 64th St and 60th Ave NE. Failing that, Metro could have chosen to use an overflow parking lot across from the US Fisheries site and install a terminal bus stop (with what we hope would include a Honey Bucket and maybe a bench) on NE 65th and Sand Point Way NE as necessary.

The new Route 62 is by no means a shining star in Metro’s route network, but it shouldn’t be treated like toilet paper. It provides a valuable service to a relatively dense and lower-income area of North Seattle while simultaneously anchoring a major federal employment hub. Riders shouldn’t face the kind of Bad Old Metro routings that the agency has been desperately trying to untangle. Transit Planning 101 says that couplets are bad, big loops are worse, and big loops with a mid-route layover are the death of rider confidence. Metro’s decision to “trial” this Route 62 variant is just incomprehensible. They should go back to the drawing board.