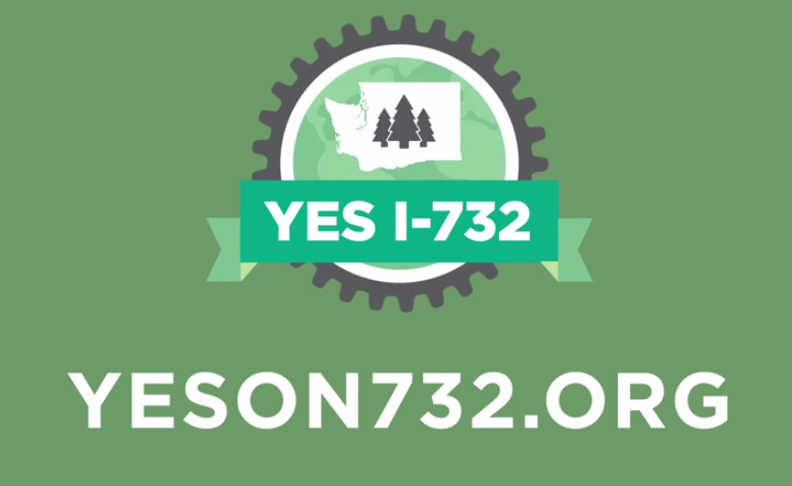 Editor’s note: On Monday we published a “Vote No On I-732” argument by Rebecca Saldaña. Today the second op-ed of our two-part series will make the case for I-732, a proposed initiative that would create a carbon tax, reduce some taxes, and make other related changes to state law. The Urbanist did not weigh in on this measure when issuing the organization’s endorsements.

The message from the climate science community is clear: Our planet is warming at an alarming rate as a direct result of human activity. In fact, the most accurate data available suggests we have at most five years to begin a dramatic reversal of our carbon emissions before the harm becomes irreversible.

Our opponents say, “We are at a crisis point, and we cannot afford to get [climate policy] wrong.” But what can possibly be right about not taking every chance we have to stem the compounding effects of climate change? The action we take today will have a direct impact on the health of our planet tomorrow and in a thousand years. Our opponents say they have a better policy, but there’s nothing on the table. All they offer in exchange is a false choice.

I-732 is our best chance to get Washington state and the rest of the country started on the path to climate action before it’s too late. By failing to take action at this critical time, all we will have accomplished is ensuring the delay of climate action for four – or more – long years.

While I’m well aware of the urgency of our situation, I’m also not so naïve to believe that I-732 will solve climate change all by itself. It also won’t solve poverty or income inequality all by itself. Major investments in a low-carbon energy future, such as better transportation options, development of alternative energy sources, and programs to support communities disproportionately impacted by climate change are an integral part of our transition strategy in the years ahead. However, immediate, economy-wide moves to curb fossil fuel emissions are needed now.

I-732 is that first move. It’s an essential step toward making meaningful progress toward carbon reduction in Washington State. It fulfills our moral obligation to ensure we leave future generations a cleaner, healthier, safer place to live. And it fulfills our economic obligation to do so in a budget friendly way. Sadly it seems that opponents of I-732 have lost sight of the historic opportunity we forego if 732 fails to pass.

While not perfect, I-732 is extremely sound climate policy. More than 50 University of Washington climate scientists have endorsed I-732, joining national leaders such as James Hansen, arguably the most important and most influential climate scientist in the world, and Steven Chu, Secretary of Energy under President Obama and winner of the Nobel Prize in physics. Audubon Washington, Citizens’ Climate Lobby, bipartisan legislators and business leaders, and numerous other groups and individuals support the initiative. Concerned citizens in Washington state and across the county recognize the importance of taking action on climate change and passing the nation’s first revenue-neutral carbon tax.

I-732 is a simple carbon tax swap. It puts a price on the dirty fossil fuels that are burned in our state. This makes cleaner energy sources like wind, solar, and hydropower less expensive. All the money raised from taxing carbon pollution is put back into everyone’s pockets by lowering other taxes:

The best way to see how I-732 would impact you is to use the Carbon Tax Swap Calculator developed by the University of Washington.

I-732 is not an experiment. Economists on both sides of the political spectrum agree that the most important thing that we can do to take action on climate is to put a price on carbon. In writing about I-732, The Economist said, “environmentalists would be mad to pass up the opportunity the high turnout of a presidential election year presents to pass green initiatives—especially one as desirable as a carbon tax.” We also have proof that this approach works. British Columbia, which implemented a similar revenue-neutral carbon tax in 2008, has cut its greenhouse gas emissions five to 15 percent, while still growing its economy at a faster pace than the rest of Canada. The Sightline Institute, a well-respected independent think tank said I-732 will “put wind in the sails of Washington’s clean energy economy as nothing else possible,” it will also help “low-income families by making Washington State taxes less regressive.”

Initiative 732 is the best chance we have in front of us to take big action on climate change. We can no longer fiddle while the planet burns. This is the right policy at the right time. Please visit https://yeson732.org/ to learn more. And join me in voting Yes on 732.

Jon Alexander is the president of Sunshine Construction and has been a general contractor for the past 32 years. Sunshine Construction is based in Seattle, Washington, and is nationally known for its work specializing in green building and remodeling. He has received the Innovations in Conservation Award from the Resource Venture and has received accolades in the Seattle Built Green Design Competition. The Sensible House, a new construction project, was the first to receive Built Green’s coveted 5-Star rating. The Luk Residence was Built Green’s first 5-Star remodel project. Jon has given numerous workshops on green building at local and national conferences. He has long been on the executive committee for the Built Green program of the Master Builders Association of King & Snohomish Counties and is one of the founders of the Northwest EcoBuilding Guild. Jon earned a BA in Environmental Studies from the University of Washington and is a fourth generation construction contractor.