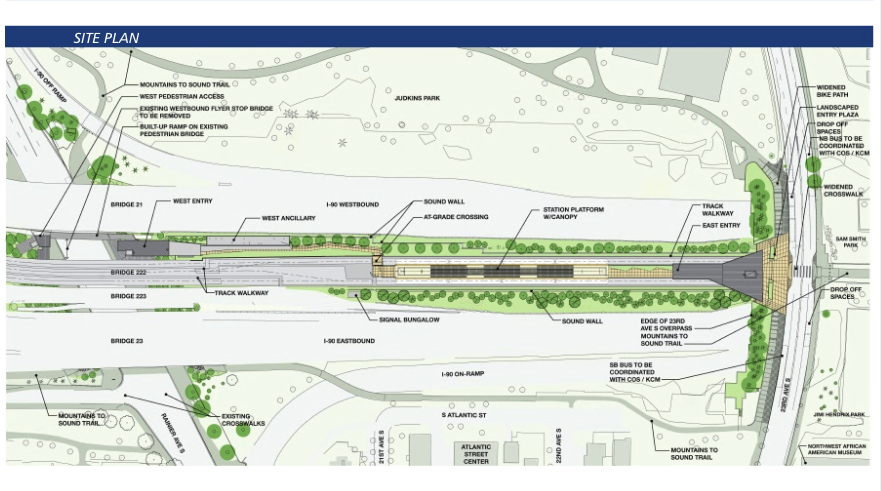 On Tuesday, Sound Transit held an open house at the Northwest African American Museum in the Central District to go over the finalized designs of the forthcoming East Link Judkins Park Station. Sound Transit plans to locate it middle of I-90, replacing the current freeway bus station. The main thrust of this meeting was to go over the final architectural design features, as well as plant and art installations. Toward the end the presenters also took a few questions from the audience.

The new station has long pedestrian approaches to the tracks which will make it one of the longest stations lengthwise in the system. This is due to the connection to both 23rd Ave S on the east side and Rainier Ave S on the west side. The station descends from east to west overall on a long, gentle slope. In addition, the approach from Rainier Ave S contains an at-grade crossing over the rails, similar to ones that exist at SODO Station and the at-grade stations in Rainier Valley. When staff members were asked about this, they indicated that the reason this crossing was added was to preserve the existing pedestrian bridge over Rainier Avenue. An elevated crossing of the rail would have required replacing this existing piece of infrastructure.

A significant amount of time was spent talking about the visual environment of the station. The plant selection in particular is designed to match the surrounding landscaping while the sound wall will have some glass sections in it to allow additional sunlight to filter into the station. Staff also took time to make clear that the station was given an open design to avoid the feeling of “being trapped” or unable to move away from other waiting passengers if so desired.

As has been covered before at Capitol Hill Seattle Blog, the art of the station largely focuses on the life of one of Seattle’s most famous sons: Jimi Hendrix. Pictures of him as a young man and from the peak of his career decorate each station entrance using newspaper-style pixel print which dissolves from a fully formed picture into dots as one gets close to the walls decorated with these pieces. There will also be etchings on the station glass wind break screens by another artist.

In the comments and questions section, a great deal of the focus was on the pedestrian and bicycle connections to the station. Many folks were concerned about the connection on 23rd Ave S due to the high speeds motorists often operate their vehicles on that street. Sound Transit staff indicated that though the Seattle Department of Transportation is responsible for the general condition of the road, they did plan to widen the crosswalk to the station plaza and locate bus stops immediately adjacent to that entrance and across the street for ease of access. The existing bridge over Rainier is also planned to be kept in order to improve access to existing bus routes running on that street.

A subsequent question about keeping the Mountains-to-Sound Trail open during construction did not yet have a clear answer as staff are still in ongoing negotiations with stakeholder agencies on how to keep the path accessible, as station construction will likely need to disrupt the existing trail where it intersects with the proposed station footprint.

Though East Link construction has already begun, construction for the I-90 segment will not begin until after the I-90 HOV lane project ends sometime next year.

2016 – Judkins Park Boards Reduced by The Urbanist on Scribd