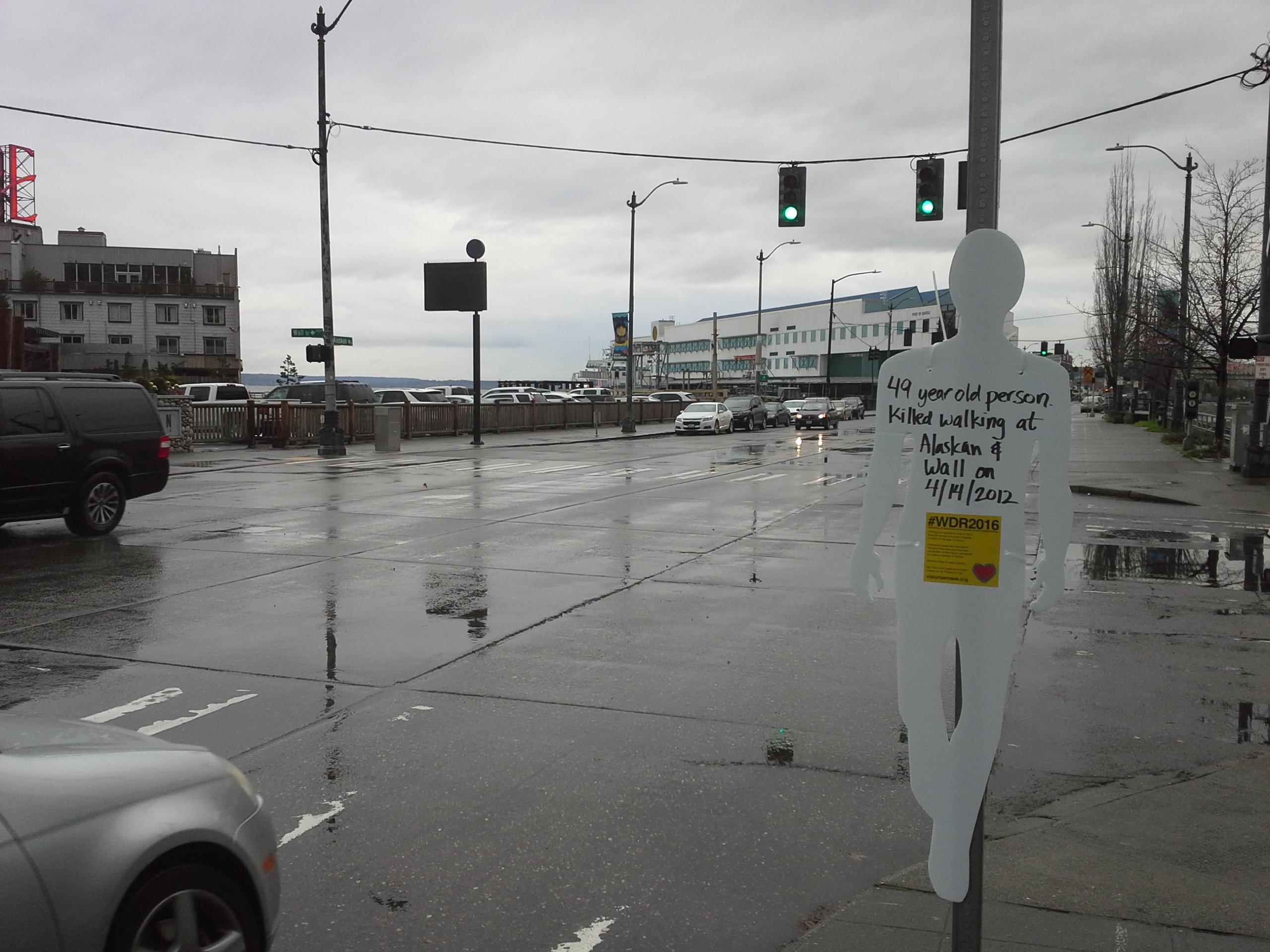 One morning in early May of this year, shortly before leaving for work, I checked my Twitter account and learned that police activity had closed a street a few blocks from my office near Tillicum Place in north Belltown. A man had been killed by a car, the tweet said. No other details were known.

As far as major cities go, Seattle is a relatively safe city for pedestrians, people on bikes, people driving. Still, we average around 35 traffic collisions within the city per day. Many only result in minor injury, but frequently the injuries are serious–and it’s often not clear what the outcome was for those involved–the driver is in critical condition at Harborview, we read. The pedestrian’s condition is not immediately known, their name has not been confirmed. News of these events ricochets around the city but settle into the background of our daily lives. At some point it fails to even really register as we become desensitized. Tragedy becomes news becomes statistics becomes a fact of life.

Today, in late November, I still do not know the name of that man who was killed on Denny Way in early May. I think about him every time I walk by the driveway where he lost his life, just as I think about Max Richards, and the poetry that his wife Marilyn Black read aloud at his memorial walk in October, whenever I walk past Belmont Ave and Bellevue Place in north Capitol Hill. And I think about Desiree MacCloud when I walk by 14th and Yesler and Leo Almanzor when I walk by 5th and Pike.

This morning, Seattle, all around our city are 240 white silhouettes placed yesterday by volunteers all over town. Every single one represents a life that was lost in the past decade, 2007-2016, within the city limits. As you go about your routines, you may notice one on your route to work, on your evening walk. If your reaction is, like me, to try and make sense of the senseless, you may try and find a pattern as to where they appear. And that pattern is there. Out of seven council districts, which have roughly the same population, the highest number of traffic fatalities happened in district 2, in South Seattle. District 2 had more fatalities than District 7, which contains downtown. The burden is not shared equally, as has been the case for decades.

But almost every single person in Seattle is affected by these events. It is impossible to ignore the toll that these deaths and serious injuries takes on our city. But there is a growing movement that seeks, even demands, to make our streets safer. Most of the work to make this happen is invisible. It is taking place in the offices of the Seattle Department of Transportation. It is happening at Seattle Neighborhood Greenways meetings all over our city, providing feedback on safety projects and pushing for ones where they were not previously considered. We are lobbyists for our own streets.

Ultimately, if we are successful, we can get to Vision Zero together, and make Seattle a safe place to walk, bike, or drive for all of our citizens. While we may not always agree on the ways to get there, I do believe that is something that all residents in Seattle can get behind and join me in working toward. We do, however, have to decide as city that we are serious about redesigning our city to put people over cars.