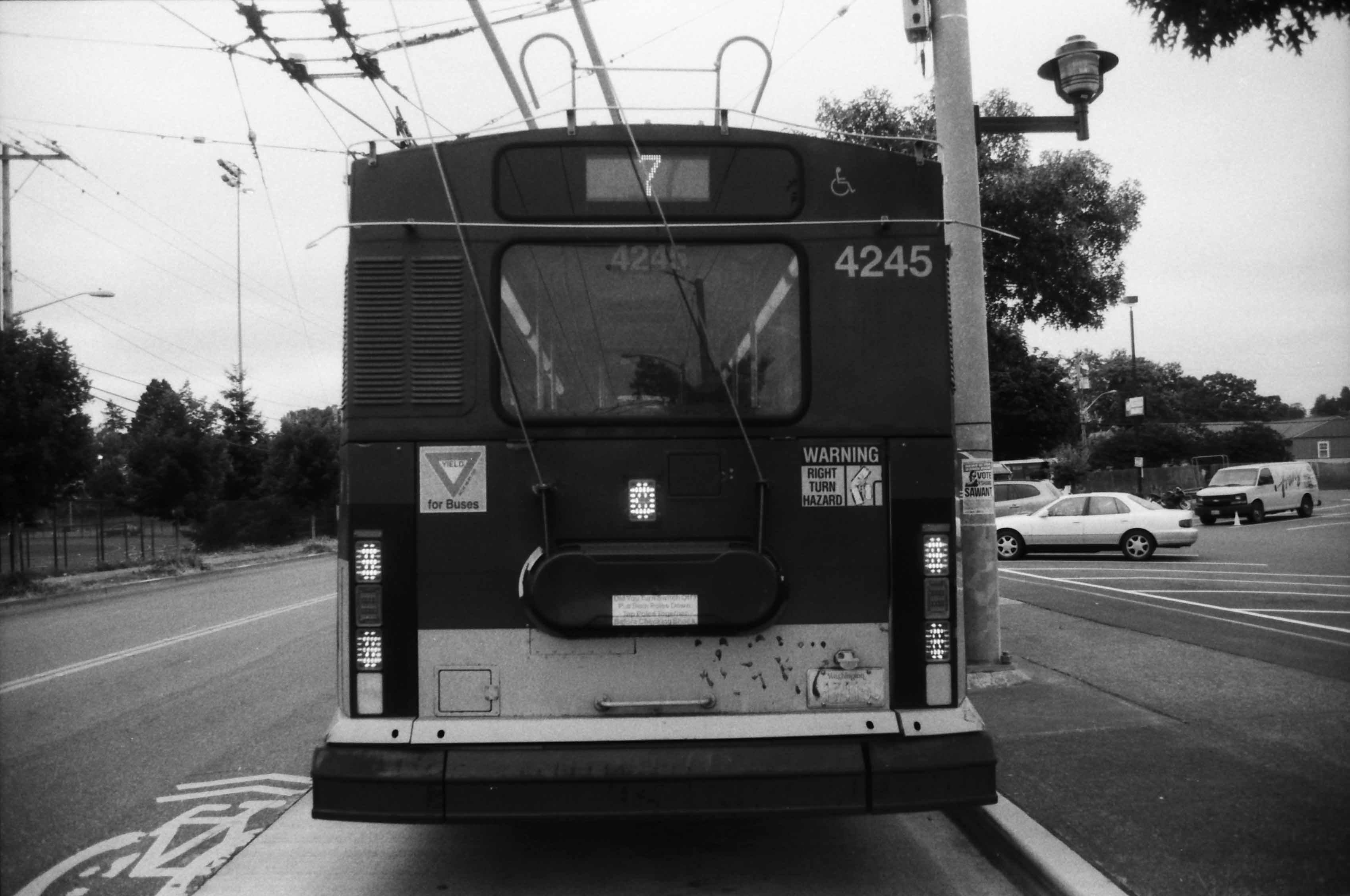 I can think of a few moments through life which stand large in my memory, formative scenes etched into my character. My parents and I, a toddler, sitting on the floor around a yellow lamp in a one-room basement, our home at the time. Taking a picture of my parents, the settings on the old camera just as my father had shown me, the camera’s perched on the rock I’m crouched behind, and they’re way out there on the beach’s waterline, waiting for me to click the shutter. Kneeling amongst a cluster of candles and graffiti at a memorial in Paris, taking in a photograph of four smiling young people, all of whom had been alive the night before. I was unable to hold back tears.

One such moment occurred just the other night. I pulled into Rainier & Henderson, the route 7 terminal in Rainier Beach, to a cacophony of whirring blue and red flashbulbs, with emergency response vehicles and personnel littered all over the roadway. There he was on the other side, across the street, sitting in the bus shelter, clutching his stomach.

White lights hot on him, direct, his green uniform polo soaking toward a darker red. The ambulance had just arrived, and here’s the fire department. Men and women in uniform, behaving quickly, setting down cases of instruments and cutting open his uniform. They’re at work. Seconds matter in a time like this, and they know it. Seattle Police is everywhere, King County Sheriffs also, they’re talking amongst each other, heads turned into radios.

A bus is blocked by the activity, and another behind it; two teens talk with a few of the policemen, gesturing down the avenues, describing the suspect and speculating on escape routes. It’s a fraction of a second of a thought, but I’m pleased at that part of the image: white cops and young black men working together, united in the urgency of addressing an obvious wrong. I hear a woman’s voice, a woman in scrubs specifying: “looks like a two inch blade. Four, five stab wounds.”

Operator Gary Fuller is a friend of mine. In life I’ve seen strangers being killed, injured, or dead; but never a friend. They’re standing him up now, helping him rise. He’s surrounded by aides and officers. I’m working my way through the crowd. They’ve scissored his uniform off now, wrapping the bandage around his body to stem the flow. I remember noticing one of the EMT staff putting on a bouffant cap. His blood speckled the length of the sidewalk, and would remain visible after everyone had gone. It dribbled so freely, and I remember being confused: I’ve forgotten how easily a body can be torn open, how all the flesh and organs we never see are right there beneath the skin, living and real as day.

I pushed through the officials, not knowing why. What could I offer that they couldn’t? Was I interfering with the process of things?

I stand in the shadow of the size of that moment. The events of the evening will be formative for him in a way he will shape later on. For me, no lecture or stack of books could educate me more than his bearing in those minutes, in that context.

This is a way to react when the chips are down.

There’s still blood coming out of him, for pete’s sake. To live on the thread of the act of self, of being thrillingly alive, and go ahead, let yourself be exhilarated by it. Is anything else a bigger deal?

“Love you, man,” I called after him, as they finished tying him down on the stretcher and preparing an IV drip. I needed him to know that he is loved in this world, loved and respected and appreciated by family and strangers, by his children, coworkers, and yes, by the passengers too. I sincerely hope he, and other drivers who get assaulted, don’t read the passengers as an entity which is against them; but rather a collection of random individuals, all of whom have nothing to do with the one person who antagonized them so on a particular night. I said it again. They were loading him into the vehicle.

The event was minutes old. I would go to my bus and begin relaying information to the coordinator. What happened, what did the assailant look like. I would work with several people trying to get a description the coordinator could put out. The street kid who was still there was the most informative. I told him, “shoot, you give better descriptions than the cops!” Four other drivers were milling about, some of us on the phone with our superiors, all of us reeling. It was too early to try to make sense of things. I wouldn’t begin thinking logically about the event until a day or two later.

Gary is my leader on Sundays, and my bus therefore had double loads for a while as I picked up his waiting passengers in addition to my own. I gave them the best ride I could, buoyant, balancing out the thoughtless negativity of what had happened with a truckload of caring, the good treatment of Gary’s people I’m sure he would have appreciated. I felt like being generous.

But what kept coming back to me was his grin. It didn’t make sense, and it was beautiful.