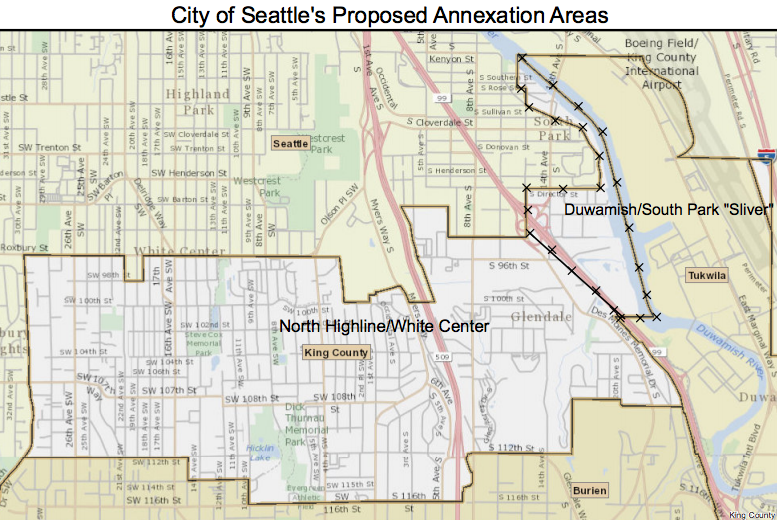 The City of Seattle is evaluating two proposed annexations near the southwest city limits that collectively could add more than 17,600 residents and 2,265-acres of land to the city. The city’s southern most neighborhoods in the area are comprised of Highland Park, South Park, and Roxbury Heights. The two annexations, however, could add chunks for unincorporated areas north of Burien known as North Highline/White Center and the Duwamish/South Park “Sliver.” Annexation of the areas would leave only one remaining large area on the edge of Seattle as unincorporated–that being Bryn Mawr/Skyway and claimed as a Potential Annexation Area by Renton.

Three other large Potential Annexation Areas exist across King County in the Renton Highlands, Fairwood, and East Federal Way–Klahanie was annexed to Sammamish in 2016–in addition to more than two dozen other smaller Potential Annexation Areas and urban unincorporated gap areas. Much of the land that could be added by the North Highline/White Center and Duwamish/South Park “Sliver” annexations is zoned for low-density residential, but substantial shares also provide for medium-density residential, commercial, mixed-used, and industrial uses.

Seattle has an incentive to annex the largest of the two annexation areas. In exchange for annexing the North Highline/White Center area, Seattle could receive a $7.75 million annual tax credit from the state to cover the increased costs–or “gap” as it is referred to as–for servicing the area with new public services and administrative costs in consolidating and aligning services. The tax credit would be paid annually for the first six years by allowing the City to retain an additional portion of the sales taxes generated in the annexed area. After the initial six-year period, the state assumes that the increased service costs can be absorbed or bridged by the City. The Duwamish/South Park “Sliver,” however, will not qualify for the same tax benefits.

The annexations are somewhat different than most of the City’s previous ones given that many services would not actually be provided directly by the City. Most public services provided within the city limits are provided directly by the City of Seattle as part of a vertically integrated network, with a few exceptions like public health, schools, and social housing–although even then, the services are nearly coterminous with the jurisdictional area of the City.

School boundaries, facilities, and services would stay as they are today. The Duwamish/South Park “Sliver” would stay with Seattle Public Schools while North Highline/White Center would stick with the Highline School District. Libraries, however, could change hands. The Seattle Public Library could assume control of two King County Library System (KCLS) branches, or things could stay as they are with the City essentially contracting with KCLS to operate the libraries.

Emergency services would universally be handed over to the City. The King County Sheriff would relinquish policing authority to the Seattle Police Department, and North Highline Fire District #11 and King County Medic One would be transferred to the Seattle Fire Department–including facilities, assets, and liabilities. Staff from those relinquishing agencies would ordinarily lose their jobs, but an agreement to transfer them to the respective City agencies seems a likely outcome since the number of staff required to service the areas would be about the same. Other services that would be affected by annexation include parks, transportation, water, and sewer.

The annexation process for both areas is conceptually proposed to occur at different times. The Duwamish/South Park “Sliver” could be first up with a vote in August of this year. The North Highline/White Center area, however, might wait until 2018 to give the City time to work out an interlocal agreement with King County and conduct further community outreach; possible election dates are August 7, 2018 or November 6, 2018.

Costs for the elections will range from $1.25 to $1.50 per registered voter in the annexation area. The smaller Duwamish/South Park “Sliver” area has 87 registered voters today compared to the 8,633 registered voter North Highline/White Center area. So on the high end, the elections could cost the City up to $13,100. City staff is recommending that if the respective 2017 and 2018 election dates are chosen by the City Council, the effective date of the annexations should be on January 1st the following year to coincide with the City’s new fiscal year.

Prior to setting a date for annexation of the Duwamish/South Park “Sliver,” the City will need to complete negotiations for an interlocal agreement with King County. That is expected to wrap up sometime in March or April, and the City Council could pass an resolution in May to put the annexation measure on the ballot.