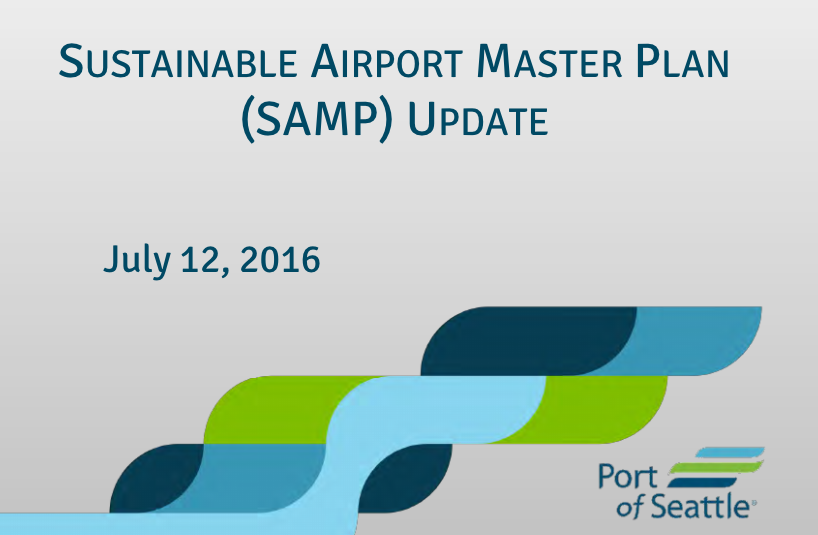 The Port of Seattle’s Sustainable Airport Master Plan (SAMP) is wading through a process to plan for airport growth for passenger and cargo service at Seattle-Tacoma International Airport over the next 20 years. The plan looks at what types of actions should be taken to accommodate and mitigate growth of airport operations. The Port of Seattle says that 45.7 million passengers passed through the airport in 2016, a daily average of more than 125,000 passengers. That translates to an additional 3.4 million passengers over 2015, an 8% increase. With that kind of passenger volume, Sea-Tac has jumped from 13th busiest airport to the ninth busiest airport in the United States.

We previously wrote about two high-level SAMP terminal expansion alternatives that the Port of Seattle was considering last spring. These included four primary options, which have been narrowed down now to two. Since the spring, the Port of Seattle has also looked at more detailed aspects of the options and is refining the alternatives, developing a capital program and finance plan, and seeking approval from Federal Aviation Administration for the future airport layout plan. In tandem with this, the Port is also proceeding through the Environmental Review process, which should wrap up in the fourth quarter of this year.

Some airport expansions shown in the SAMP are already underway, which include a complete overhaul and expansion of the North Satellite and a new International Arrivals Facility. The North Satellite project will involve a wholesale modernization of the interior, adding new gates, and constructing specific amenities for Alaska Airlines, the sole tenant of the North Satellite. The project is already moving forward and is expected to be partially complete by mid-2019 and fully complete by Spring 2021. Meanwhile, the new International Arrival Facility should be operational by late 2019.

The preferred expansion concept of the passenger terminal involves a new north concourse that connects to the existing Concourse D and a new landside terminal east of the North Airport Expressway. The Port of Seattle is considering two primary alternatives with differing tradeoffs. The first alternative is a three-pier terminal and the second a two-pier (or U-shaped) terminal.

The three-pier terminal alternative would take the form of expansion from Concourse D linearly, essentially along the bounds of the North Airport Expressway. The northernmost portion of the expanded terminal would have three piers extending westward toward the airfield. The Port of Seattle has identified a variety of advantages and disadvantage of the design. Advantages include the same gate capacity as the U-shaped alternative, easier integration with airport roadways, and more opportunity for shared holdrooms and concession areas in the middle pier. The primary disadvantage, however, is that no hold positions for aircraft would be possible.

Conversely, the U-shaped alternative would take the same expansion approach but only contain two piers. The proposed design would have the same gate capacity as the three-pier alternative. Two primary benefits of the design would be six hold positions near the airfield and relatively flexible clear space for aircraft movements to be made to and from gates and the airfield. However, the design could make it more difficult to integrate with airport roadways since the main concourse corridor would need to be wider and there would be less opportunities shared holdrooms and concessions.

With the expansion of a new concourse north the central terminal, many of the cargo and aircraft maintenance facilities would need to be moved. To compensate for these needed services, the Port of Seattle is proposing a new South Aviation Support Area just southeast of Runway 16L-34R at the south end of the airport grounds. The area is hemmed in by S 188th St, 28th Ave S, runway, and a large open space network. Access to the South Aviation Support Area would come from the adjacent taxiway of Runway 16L-34R meaning that aircraft would not have to impede the runway if traveling to and from the north end of the airport.

The Port of Seattle is considering two primary alternatives. All three options are similar in design with new aircraft maintenance facilities, tarmac holding stalls, and cargo buildings. The primary difference in proposed layout comes from possible commercial development along the eastern fringe of the site. The area around the site is heavily developed with hotels, offices, and warehousing uses. The degree to which the Port of Seattle might offer portions of the property for other commercial purposes varies greatly.

The Port of Seattle will need to realign roadways north the central terminal and provide need people mover services between the new north terminal, rental car facility, and central terminal. The people mover could come in the form of an automated train system or shuttle bus service all of which would operate outside of secure sectors of the airport. The Port of Seattle has identified five different people mover options and analyzed likely roadway realignment constraints.

The first option would be a three-stop people mover with one each at the rental car facility, new north terminal, and the northend of the central garage. The station at the garage would be located on the fourth floor. While the arrangement would provide decent access to the garage, light rail station, and Concourses C and D, it would result in longer walks to the southern portions of the airport compared to other options.

The third option would be a four-stop people mover with two stops at the central terminal: one the light rail station and another on sixth floor of the parking garage near Concourse A. This option would provide convenient access to light rail and the southern gates at the airport. It also arguably provides good access to the northern gates at the central terminal. However, the southern stop would result in a substantial reduction of parking, have complex construction staging, and could have significant wayfinding challenges.

The fourth option is another four-stop people mover. The two stops at the parking garage would be located on the first floor, one at the northend and a second at the southend. It would provide good walking access to most areas of the central terminal and light rail station, but would come with wayfinding challenges, significant construction complexities, and a major loss of parking.

The fifth option is a five-stop bus circulator. Buses would use a guideway system under this scenario and provide good access throughout the airport. The upfront cost to construct is could be relatively low, but the ongoing operational costs would be much higher than the people mover options. It would also present some serious complexities to the roadway network to develop and could limit future options for roadway changes.

The Port of Seattle will have their consultant study a shorter list of these options to determine how they might work, their feasibility, and key issues. In addition, the Port of Seattle will also have consultant study options for an automated people mover, moving walkway, busing system for airside transportation between the north terminal and the existing concourses and satellites. As part of that analysis, the Port of Seattle wants to determine possible passenger flow and capacity, develop detailed layout concepts, identify options to connect new gate and the North Satellites, and understand transfer time between international and domestic flights.

Access to S 170th St may have to be changed to limit on-ramp access only to the main terminal instead of allowing a direct northbound connection. The reason for this is that a loop road to help circulate southbound traffic back up toward the landside terminal would require a significant amount of real estate, making a southbound off-ramp and northbound on-ramp difficult to fit.

Another major constraint could be access to westbound SR-518 from the future north terminal drive. Depending upon the design, motorists would have to make some serious left-hand weaves after merging on the North Airport Expressway in order to reach the overpass to westbound SR-518. The distance to make that weave is about 500 feet, which would likely make it impossible without some sort of more direct access option like an underpass tunnel.

Going forward, the Port of Seattle will further refine the North Airport Expressway concept to ensure that local and regional access is optimized.

The Port of Seattle will evaluate phasing plans for road construction and gate expansion, cost estimates and financing scenarios, and determining the cost-benefit of options. In the coming months, the Port of Seattle should be publishing more details about these issues and proceed toward wrapping up environmental review of the Sustainable Airport Master Plan.